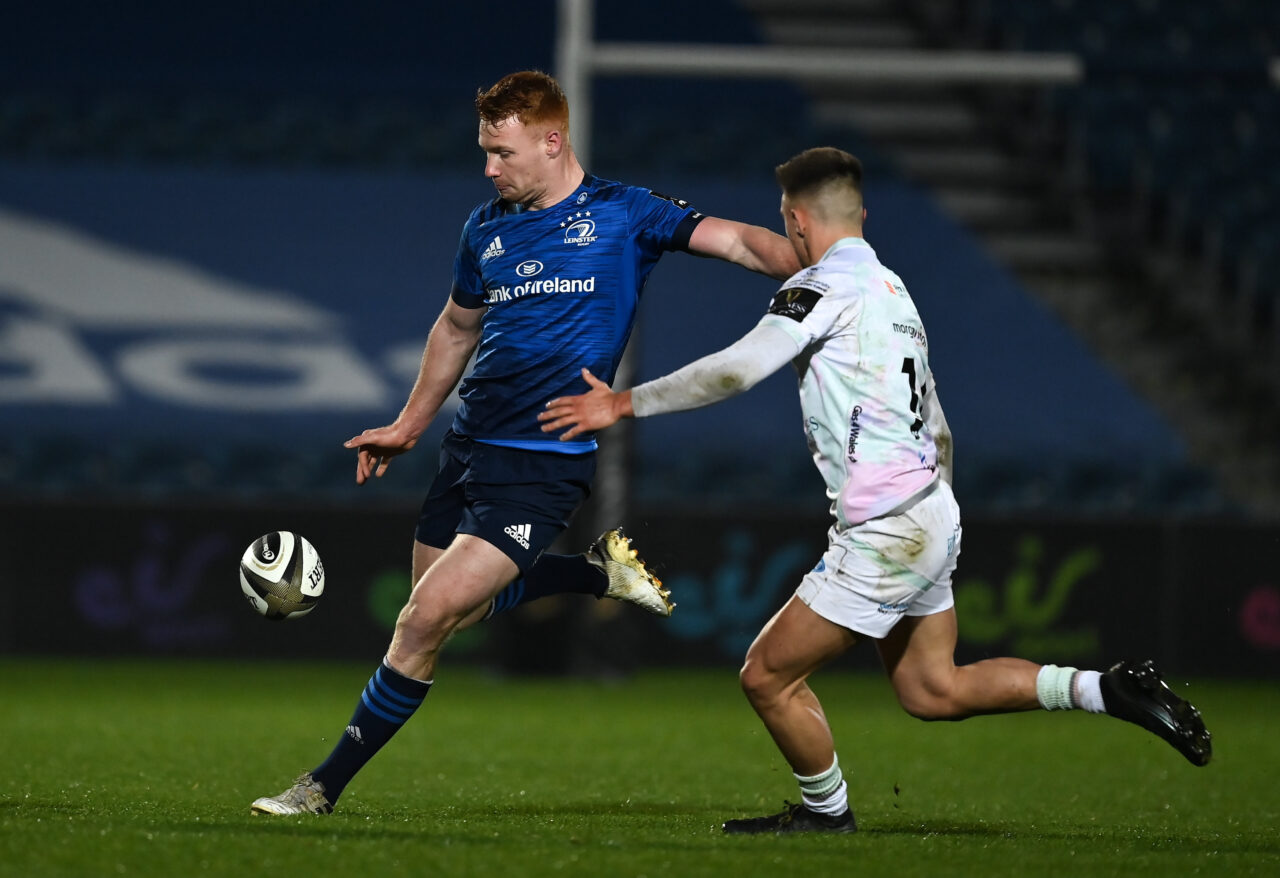 Leinster Rugby conceded three tries in 10 minutes to lose out to Ospreys in a remarkable turnaround in the Guinness PRO14 on Friday night.

On the night Devin Toner joined Gordon D’Arcy as the most capped Leinster players of all time, the Blues learned a valuable, painful, lesson ahead of the PRO14 final at home to Munster next week.

The Ospreys hinted at their intent from the first attack when hooker Sam Parry shot through a hole in midfield.

It took Scott Fardy slamming Dan Evans back in the tackle and the power of organised defence to hold the line.

Finally, out-half Luke Price was forced into a kick cross-field where Rory O’Loughlin was in place to make a mark.

The Welshmen were back on the hunt for the opening points from their next surge, Owen Watkin breaking inside the 22, just failing to connect with Reuben Morgan-Williams.

Leinster were limited to Harry Byrne clearing from a solid scrum ahead of Ospreys next pre-planned move from their lineout.

Centre Watkin was through again and Dave Kearney just held onto wing Dewi Cross on the touchline.

Ross Molony made two big hits behind the gain line and Jamie Osborne’s left foot sent the ball long, only for Fardy to take too long to roll away at a ruck.

Once again, the Ospreys had the platform to launch from a lineout on the 22. This time, Price’s punt found Cross and his chip trickled out of play with Rowan Osborne in command of the situation.

The combination of a quick lineout, Josh Murphy’s burst and Jamie Osborne’s big boot enabled Leinster to reset with a lineout around halfway.

The Blues finally made their way into attacking half from Harry Byrne’s carry at close quarters, Ciarán Frawley rolling a kick inside the 22.

When Seán Cronin connected to Ross Molony at the next lineout, Leinster moved the ball left for Jamie Osborne to nurse a lovely kick inside the 22 which yielded a five-metre scrum.

Scrum-half Rowan Osborne fed Byrne and the out-half flipped a pass which Max O’Reilly could not hold.

Centre Rory O’Loughlin showed strength in contact. Quick hands from half-backs Osborne and Byrne allowed Frawley to pick a kick which bounced into touch as Dave Kearney led the chase.

A penalty at the ruck meant Byrne smacked a penalty deep inside the 22. Josh Murphy barrelled forward.

Rowan Osborne sniped the fringes. Toner twisted for a metre. Michael Bent was held up over the line.

Tight-head Ma’afu Fia was yellow-carded for the most egregious in a series of infringements with a scrum to come in the shadow of the posts.

From there, Scott Penny popped the pass to Rowan Osborne and Harry Byrne took the transfer to split defenders for the try, Frawley converting in the 22nd minute.

The trend for the visitors to hold the ball until they kicked it away continued. O’Reilly fielded well and countered.

When the full-back was taken down, number eight Gareth Evans was ‘Johnny on the spot’ to win a penalty on the floor, Price kicking the points for 7-3 in the 27th minute.

Then, Jamie Osborne snapped up a loose ball from the restart to outstrip Price on his way to the right corner for his first try for Leinster on just his second start.

Scott Fardy showed Ospreys the way to claim a restart and the veteran put Watkin down in midfield before indiscipline allowed Price to go close from a long-range penalty.

Centre Frawley was on standby to retrieve the ball and hammer it downfield, prompting a series of kicks which concluded with O’Reilly putting the ball to touch.

Trojan work by Toner at a maul caused a turnover ball which Byrne and Jamie Osborne turned into an opportunity for Kearney to threaten.

The Welsh club were not short of ball, Dan Evans losing control just as Kearney stepped in to administer the hit.

The greasy conditions were making handling difficult and Kearney’s knock-on was the basis for Ospreys last attack of the half which ended with Leinster’s defence on top.

The willing Kearney put pressure on at the kick-off and prop Fia’s high tackle led to a strong position inside the Ospreys territory.

Then, Toner’s lineout grab and Frawley’s hard line pre-empted Michael Bent’s drive and Harry Byrne’s acceleration onto Rowan Osborne’s pass for a terrific try, Frawley adding the extras for 19-3 in the 45th minute.

The Ospreys moved back and forth to earn a penalty when Leinster lost their patience rather than any significant ground.

The ageless Toner was the main driver behind smashing Ospreys’ maul into touch and, immediately, took Cronin’s lineout throw for centre Osborne to clear his lines.

The more the Welsh handled, the more ground they lost as Leinster’s hard-up defence swarmed forward with magnificent menace.

Half-backs Osborne and Byrne were cranking up the pressure with increased tempo as the visitors began to tire.

Replacement hooker Dan Sheehan, on for Fardy, made an instant impact on both sides of the ball from the interesting perspective of number eight.

The Ospreys scrum did offer hope of a recovery in that it was good enough to claim penalties.

However, Max O’Reilly was secure under the high ball and Frawley and Sheehan exploded into Dan Evans to bring the physical momentum that conjured a penalty.

Leinster were not clinical enough in the maul and Osborne had to be vigilant to stop Dan Evans in his tracks.

Replacement Dewi Lake managed to get in behind the first line of defence. Morgan-Williams was almost through before Toner got to grips with Garyn Phillips.

Referee Chris Busby spotted Andrew Smith’s high tackle on Dewi Cross and viewed it as worthy of a yellow card.

Leinster did what they could to stem a maul and a series of drives ahead of Olly Cracknell hammering home for a try which Josh Thomas converted in the 70th minute.

Sheehan’s partial block and Byrne’s gather were undone when Garyn Phillips stooped for a turnover penalty.

Flanker Morgan Morris closed down the retreating O’Reilly and Watkin had the power to break tackles on his way to the whitewash, Thomas converting for 19-17 in the 74th minute.

It got even worse when Harry Byrne was blocked down by Thomas. O’Reilly was deceived by the bobbling ball. Thomas was on hand for a fine finish and conversion for Ospreys to lead for the first time in the 77th minute.

It left little time for Leinster to strike back. They stayed true to their values, moving the ball over and back against a re-energised defence until Dewi Lake snatched a turnover penalty to close out a dramatic win. 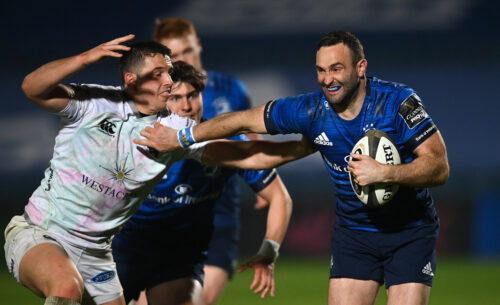 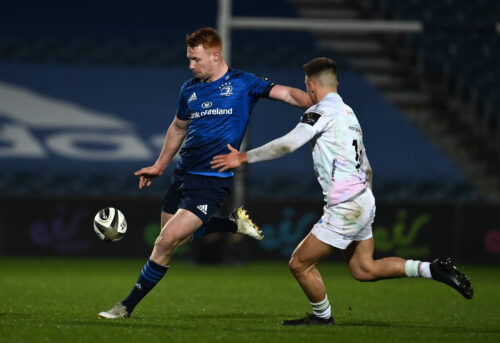 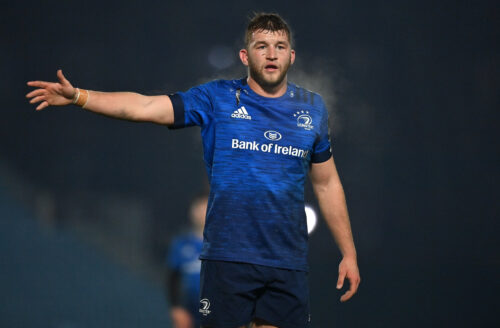 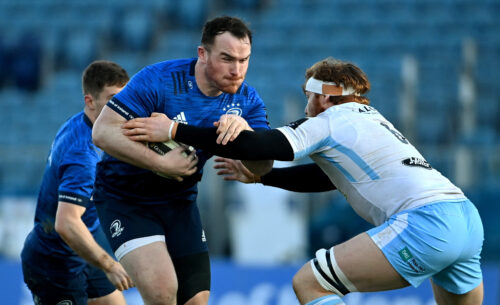 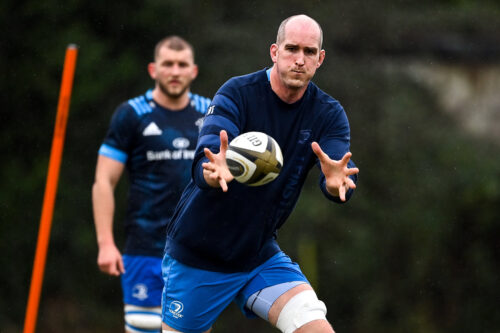 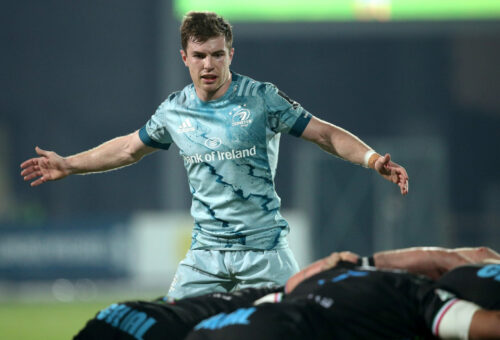