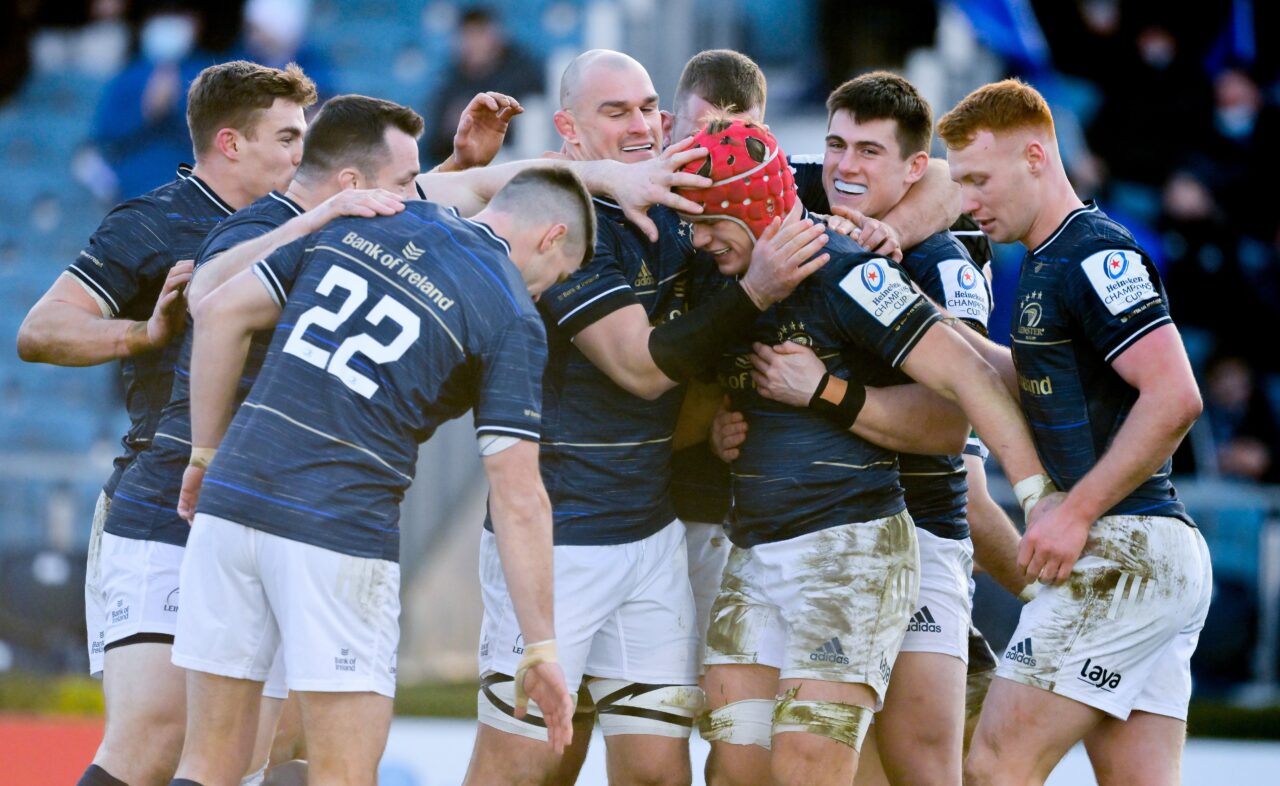 Leinster Rugby recorded their biggest winning margin in the Heineken Champions Cup, putting 13 tries past Montpellier at the RDS Arena.

The visitors did come to Dublin with an array of Academy players mixed with established senior players in their team.

And it proved a baptism of fire for those young players as Leinster stamped their intent all over the game, racking up a bonus-point by the 25th minute.

The late withdrawal of James Ryan led to the promotion of Josh Murphy to the second row and the transfer of the captaincy to Garry Ringrose.

Leinster’s first raid almost led to the ultimate reward when Ross Byrne’s wrap-around opened the space for Jimmy O’Brien to go close down the left.

Then, Ciarán Frawley’s dummy and break were not matched by the final pass to fellow centre Ringrose.

The French did not heed the warning signs, Jordan Larmour making ground up the right and accurate passing putting Jack Conan over on the left for Byrne to convert in the fifth minute.

Almost immediately, Tadhg Furlong was forced off the field with an injury for Michael Ala’alatoa to go straight to a scrum.

The next time Larmour came gunning down the tramline, he gathered his own kick and the search for space on the other side resulted in O’Brien’s offload to Frawley which was ruled forward by referee Wayne Barnes. 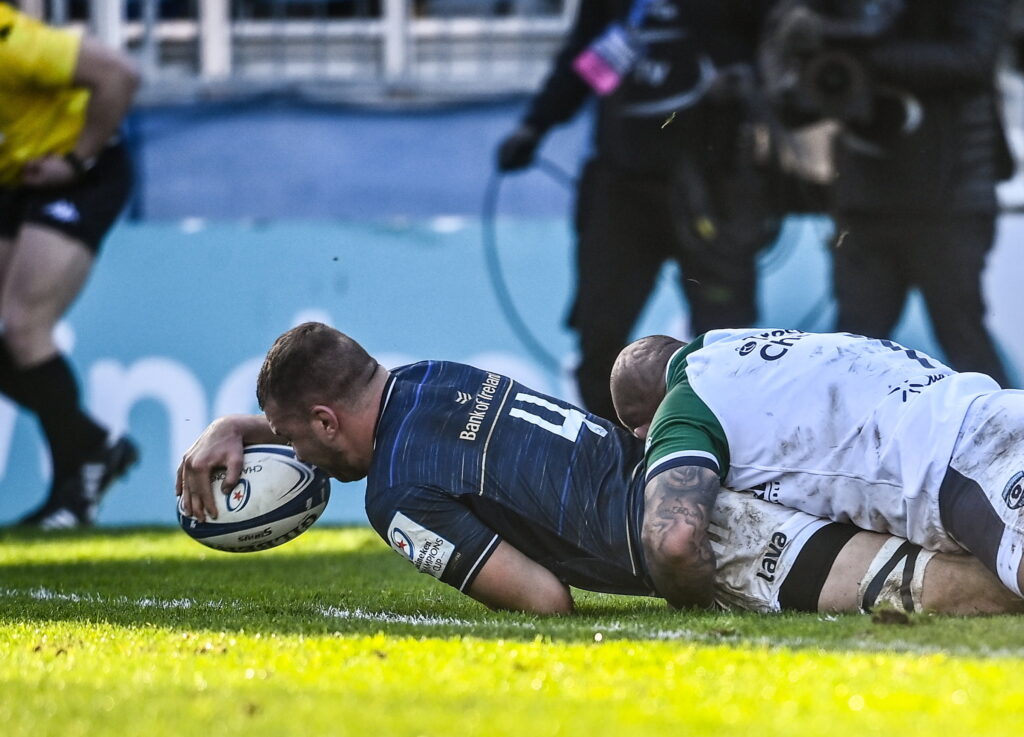 The flow of traffic continued, Caelan Doris’ offload was backed up by another from Ringrose to put Montpellier in a bind.

Once again, the ball was whipped to the left where O’Brien’s nimble feet and shovel pass led to a knockback by Henry Thomas, Jamison Gibson-Park alert to pounce for the second try, converted by Byrne in the 10th minute.

It was all happening far too easily for the home side, Kelleher the next to shoot a gap before forcing the offload.

A monster scrum drew a penalty and Leinster were off again, Ringrose prominent in an attack which looked like it would come to nothing until Louis Foursans-Bourdette’s clearance was blocked down by Kelleher and touched down by Byrne for a third seven-pointer.

Out-half Byrne wasted the benefit from a second scrum penalty when failing to find touch ahead of a crossfield kick that yielded a five-metre scrum.

Prop Thomas timed a tackle to perfection on Gibson-Park to prevent further damage.

But, a trademark Larmour sidestep provided the momentum for Ross Molony to reach for the bonus-point try, Byrne’s conversion making it 28-0 in the 25th minute. 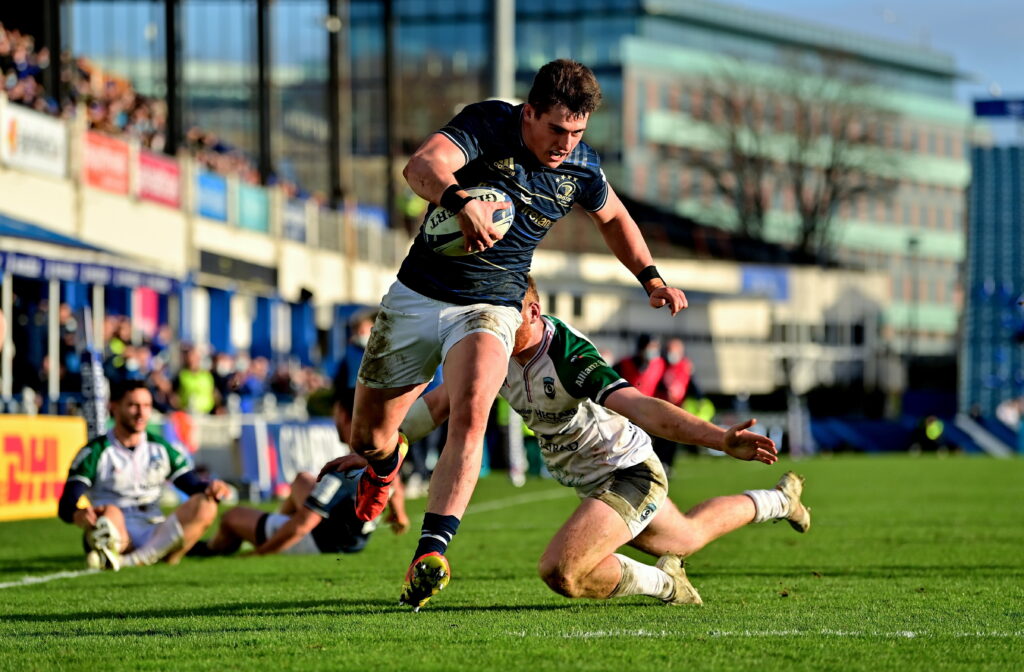 Montpellier’s first semblance of an attack was generated by Karl Martin’s two-handed offload, flanker Masivesi Dakuwaqa grounding the ball for Foursans to convert.

A rare Leinster error almost produced a second try for Marco Tauleigne only for Guilhem Guirado’s foot to be seen in touch.

Nonetheless, it was a reminder of what can happen when concentration is lost.

The response was to stitch four offloads into a surge that, eventually, concluded with Ala’alatoa taking a fine line onto Gibson-Park’s flat ball, the conversion taking Byrne past Isa Nacewa to fourth on Leinster’s list of all-time points scorers.

A mesmerising display of ball-handling triggered by Frawley’s incision and Doris’ beautiful one-hander set up Lamour for the sixth try, making it 40-7 at the interval.

Leinster reappeared with James Lowe on the left-wing, O’Brien switching to the right for Larmour.

Lowe’s first touch was a sumptuous left-handed miss-pass to O’Brien, the hands of Doris the highlight in the build-up to Conan’s pop pass to Josh van der Flier.

The restart was controlled and Andrew Porter’s back-door pass was the start of another attack, Ringrose the oil in the machine for O’Brien to show a clean pair of heels, cutting in from the right, Byrne converting for 54-7.

Johnny Sexton was one of a number of replacements to come on just as van der Flier showed remarkable anticipation and speed to read Vincent Giudicelli’s lineout throw for the ninth try. 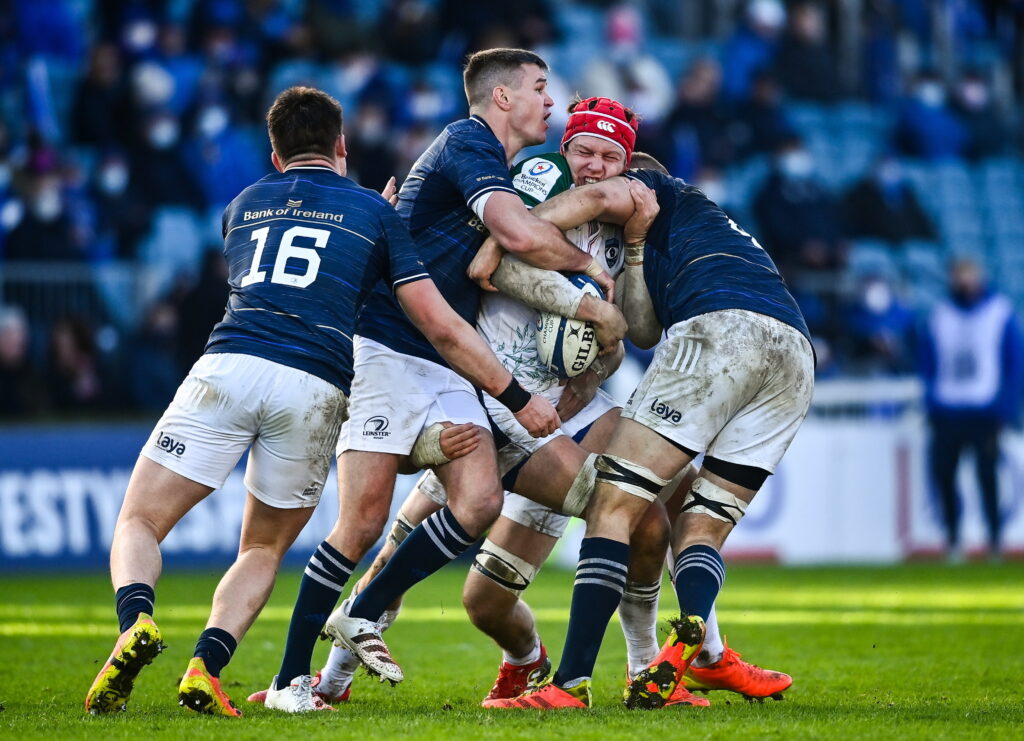 Then, the Blues mindset for defence was tested along the five-metre line, showing good cohesion in working without the ball.

At this point, they were committed to moving the ball from everywhere, Lowe’s passing and left boot having an influence.

However, the lack of structure was food for Leinster’s continuity, a blur of passes from deep starting with Conan’s counter ended with Dan Sheehan finishing off the try of the match.

Dakuwaqa’s was shown a red card for a challenge on van der Flier which wouldn’t help the visitors’ cause.

Replacement hooker Sheehan was on hand to pick up his second try from a well-controlled maul for Sexton to add two more.

Sexton and Ringrose combined to take play to the line and Conan carried over it for the 12th try, Sexton adding the conversion before it was left to Lowe to claim the final five, Sexton’s conversion completing a very good day at the office for Leinster. 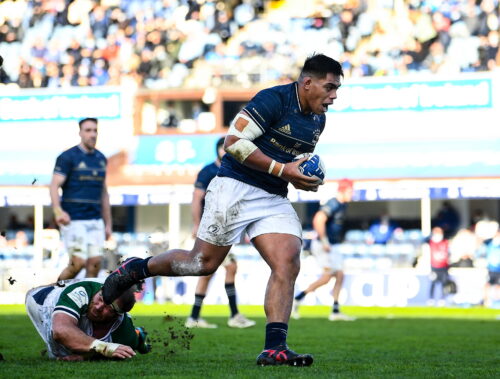 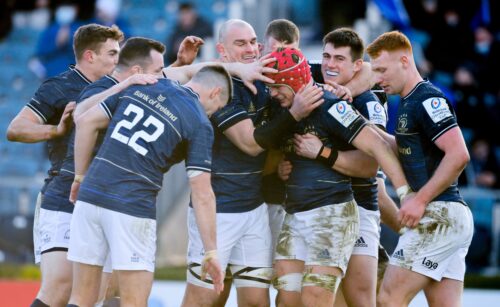 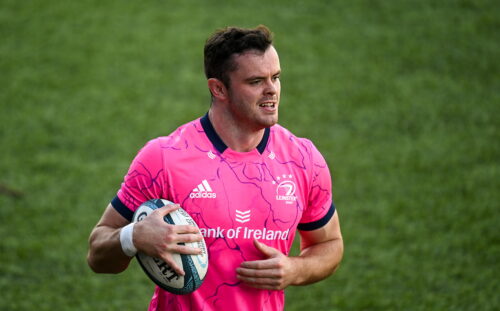