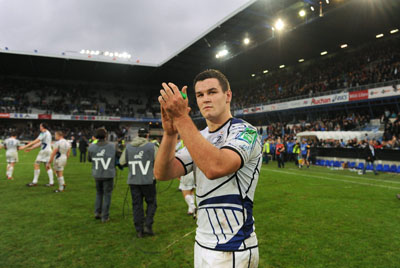 Barely five short months on from his heroics in Cardiff, Jonathan Sexton again showed nerves of steel as he landed the kick from the right amid a chorus of boos at the Stade de la Mosson.

A fired-up Montpellier side, driven on by man-of-the-match Mamuka Gorgodze, were just seconds away from a much-prized victory over the defending champions.

The tournament newcomers went in at the break with a 13-6 advantage, their best moment coming when captain Fulgence Ouedraogo finished off a breakaway try.

Sexton had kicked two penalties for an early Leinster lead, but the French outfit edged a bruising first 50 minutes with Francois Trinh-Duc stretching their lead to 10 points.

But with their bench having a crucial impact, Leinster dominated the final quarter. Replacement hooker Sean Cronin powered over in the corner for a 66th minute try.

Then Sexton, having missed a penalty just moments earlier, stepped up to land a superb conversion from near the touchline and his final kick was another well-measured effort.

It was a courageous fightback from Joe Schmidt’s charges whose greater experience was a factor in what was a thrilling encounter played by two attack-minded teams.

Ouedraogo drew an early penalty in front of the posts which Montpellier’s young goal-kicking scrum half Benoit Paillaugue comfortably slotted over.

Their lead lasted barely two minutes, a deliberate knock on from Mickael Demarco setting up Sexton for a pinpoint penalty from the right.

Two clever kicks from Isaac Boss got Leinster deep into Montpellier territory, but the French side soaked up the pressure and showed a willingness to move the ball through the hands.

Leinster were more accurate and composed early on, using their greater experience to good effect. Some cohesive work at the breakdown preceded Sexton’s second penalty, this time from outside the ten-metre line.

The game really exploded into life around the midpoint of the first half, with midfield breaks from Trinh-Duc and Sexton raising the decibel level.

Sexton’s surge led to him kicking to the left corner for the onrushing Luke Fitzgerald. He was beaten to the ball by Timoci Nagusa but popped up moments later on a dangerous sidestepping run into the 22.

However, just when it looked like Leinster might unlock the home defence, Isa Nacewa’s grubber kick ricocheted for Lucas Amorosino to launch a kick chase and quickly turn defence into attack.

Nacewa and Fergus McFadden scrambled back but the Argentinian regained possession on the deck and deftly passed for Ouedraogo to sprint through and score under the posts.

The conversion was added by Paillaugue and he soon fired over his second penalty following a lineout infringement from Leinster captain Leo Cullen.

Leinster gained a sizeable amount of territory as they tried to hit back. McFadden was put into space on the right, only for the Montpellier defensive line to hold firm.

A solid scrum set up Geoffrey Doumayrou for a midfield raid, yet Leinster were smart in defence and the industrious Richardt Strauss won a penalty at the tail end of a very physical opening 40 minutes.

The visitors defended superbly at the start of the second period, keeping Doumayrou and replacement Rémy Martin out amid an early spurt from Fabien Galthie’s men.

A rock solid scrum, five metres from their line, and a terrific touchfinder from Sexton got Leinster on the move again. His half-back partner Boss was central to a promising set of phases, with the white-shirted forwards and backs handling well.

Rob Kearney countered in fine fashion and Jamie Heaslip swallowed up Paillaugue to win a turnover that led to Gordon D’Arcy and Fitzgerald breaking down the left.

But Montpellier managed to keep Leinster at arm’s length and Trinh-Duc, taking over the kicking duties from a benched Paillaugue, landed a 56th minute penalty.

Cronin, one of Schmidt’s second half changes, took a flat pass and got Leinster on the front foot shortly afterwards. Cullen and company also upped their collective efforts with time running out.

They showed plenty of composure to gradually wear Montpellier down. With just a quarter-of-an-hour remaining, Sean O’Brien took the ball up through the middle to give the visitors momentum.

Eoin Reddan began a thread of passes out to the right where there was enough space for Cronin to build up a head of steam, break through the tackles of Yoan Audrin and Gorgodze and bulldoze his way over the line.

Sexton, who had missed a kickable penalty moments earlier, sent over an excellent conversion from near the touchline and Leinster were suddenly just three points adrift.

The title holders hunted for more as they pummelled away at the home defence, their back row and replacements Nathan White and Devin Toner all taking the ball on at pace.

Cullen called on Sexton to knock a 73rd minute penalty into touch. Montpellier succeeded in holding the resulting lineout maul at bay, but Leinster kept pressing and were rewarded in the dying seconds.

Nacewa and Kearney attacked on the right following a quickly-taken lineout and with Montpellier infringing at the ensuing ruck, Sexton was given a chance to have the final say.