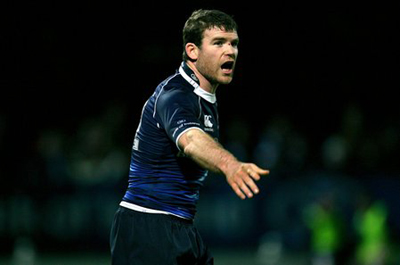 Speaking after the game Magners Man of the Match Jamie Heaslip said: “That was right up there with any international match in terms of intensity. It’s always nice to beat Munster, but we know that it was a battle and we just came out on top.

“We have faith in our defence and we didn’t panic and there were confrontations all over the pitch. We’re not going to let this win go to our heads. Although it’s good to have a bit more space between us at the top of the league, we have a lot of hard games coming up, particularly next week’s against Clermont.”

Ronan O’Gara kicked his side into a 3rd minute lead and doubled the advantage after 14 minutes by which time Leinster captain Leo Cullen was harshly yellow carded and he was soon joined on the sidelines temporarily by Donncha O’Callaghan.

From the resulting penalty Jonathan Sexton kicked a penalty, to reduce Munster’s lead to three points after 19 minutes, but O’Gara restored the six point lead with a 24th minute strike.

The see-saw nature of the game continued and this time Fergus McFadden reduced Munster’s lead with a penalty while Sexton was receiving treatment for an ankle knock after some excellent work from Stan Wright and John Fogarty.

O’Gara kicked his side into a 12-6 lead but with Shane Jennings typically abrasive up front it was no surprise when Leinster eventually took the lead by virtue of a well worked Rob Kearney try, expertly converted by Sexton from the touchline, to give the visitors a 13-12 half time lead.

It was a tense second half and the boot of O’Gara again edged Munster into the lead, but with Leinster dominating greater passages of play and inflicting pressure, eventually their effort told and Sexton’s 67th minute strike would prove to be the winning score.