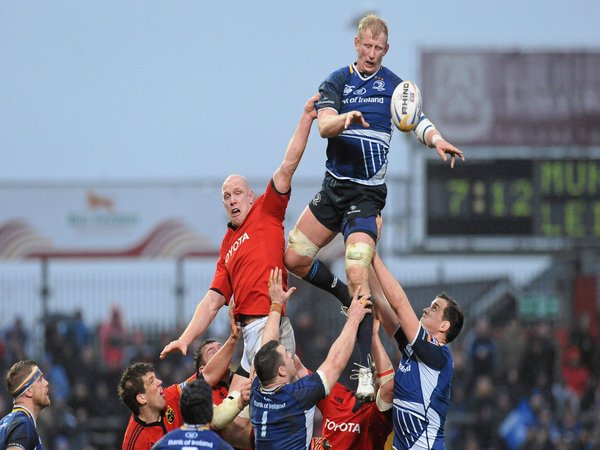 Brian O’Driscoll showed his trademark poacher’s instinct from a close-in ruck in the 71st minute, nipping in by the posts after a mammoth 27 phases of patient carrying and ruck control from Leinster’s backs and forwards.

Driven on by man-of-the-match Isaac Boss, the visitors got the decisive score of a hard-edged derby to keep on track for a home semi-final.

Ian Madigan’s right boot was the main influence for Leinster in the first half at Thomond Park, firing over four penalties for a 12-10 interval lead.

Keatley kicked two penalties to Madigan’s one as Munster edged ahead 16-15, but in an energy-sapping end game Leinster came out on top to complete a season’s double over their arch rivals.

Leinster were backed by a brisk wind blowing downfield in the opening half, and were first to threaten the try-line.

An instinctive flick pass from O’Driscoll allowed Isa Nacewa the opportunity to launch a kick chase and with Munster caught flat, Rob Kearney reached the bouncing ball ahead of Donncha O’Callaghan.

Kearney gathered possession and with a couple of forward rolls, his momentum took his over the try-line with O’Callaghan hanging onto him.

It seemed that the Ireland full-back had grounded the ball, but O’Callaghan got enough of his body in the way to convince TMO Jude Quinn otherwise.

Madigan used the wind to swing over a left-sided penalty a minute later, with Mike Ross gaining the upper hand in the first scrum.

Ross’ prop colleague Cian Healy then chopped down Paul O’Connell and forced a turnover after Munster, who controlled possession for most of the opening quarter, had got into scoring range.

The visitors’ out-half nailed a third attempt in the 20th minute – this time from inside the 10-metre line – but from the restart his opposite number Keatley broke the try deadlock.

Damien Varley snaffled a superb turnover after tackling Nacewa close to the Leinster line and the ball was swept to the left for Keatley to dive over in the corner.

The difficult conversion was missed but Kilcoyne gained revenge on Ross in an ensuing scrum, with James Coughlan and Peter O’Mahony exerting more influence in open play.

Munster struck for a second try in the 27th minute, Keatley firing a pass out for onrushing full-back Jones to snipe over in the corner with Leinster claiming O’Driscoll was obstructed by James Downey in the build-up.

Keatley’s conversion attempt from wide out shaved the post. Back came Leinster, Varley leaking a penalty for not rolling away and Madigan mopped up with his fourth successful kick.

Munster made early headway on the resumption, their scrum winning a decision that led to Keatley’s opening penalty of the night.

He added his second two minutes later, drilling over from distance to reward Tommy O’Donnell for good foraging at the breakdown.

Madigan cancelled that effort out to make it 16-15 with half-an-hour remaining, with the ruck area continuing to be fiercely competitive.

A series of lineout poaches kept O’Connell and company on the front foot, but they were unable to threaten the scoreboard in a stop-start third quarter.

Conditions worsened as the rain pelted down, making for a scrappy finish as Munster’s supremely committed defence, with O’Mahony and O’Donnell standing out, handled anything Leinster could throw at them.

That is until Boss sparked a stirring spell of carrying and rucking from the forwards with powerful replacement prop Jack McGrath making his mark.

O’Driscoll, having been stopped short just moments earlier, seized his chance brilliantly to go over inches from the right post despite the presence of Downey and BJ Botha.

The try was awarded, Madigan converted and Munster’s late rally was foiled by two telling turnovers from Sean O’Brien and Jamie Heaslip, who came to the fore when it mattered most for Schmidt’s side.

LEINSTER SCORERS: B. O’Driscoll (1 try), I. Madigan (5 penalties and 1 conversion) 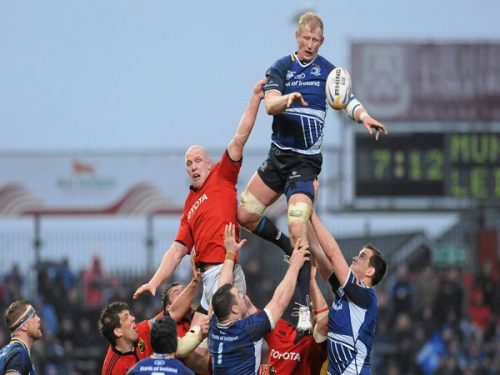