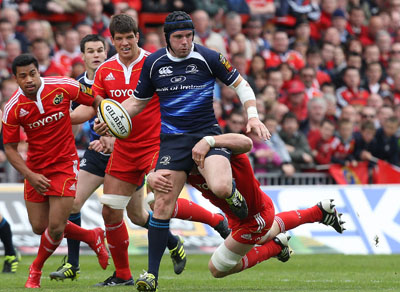 Leinster fell to a 10-point defeat to Munster in their final match of the season, missing out on a potential Magners League and Heineken Cup double…

Leinster had their periods of dominance in the league decider at Thomond Park, but their failure to convert pressure into points came back to haunt them in the end.

Munster managed to soak up the pressure in both halves and keep their try-line intact, with Doug Howlett's 12th-minute touchdown setting them on the way to their second Magners League title in three years.

It was a win apiece earlier in the campaign – Leinster were 13-9 winners at the Aviva Stadium and a Ronan O'Gara-inspired Munster claimed a 24-23 triumph in Limerick last month – and there was a typically bruising opening to the grand final.

Sexton miscued a long range penalty with the wind behind him, six minutes in, and although Leinster won a series of early turnovers, Munster were first on the scoreboard.

The Munster pack laid the groundwork before Lifeimi Mafi got away from Eoin Reddan and laid the ball off for former All Black Howlett to score in the corner.

O’Gara read the wind superbly to stab the conversion over, rewarding his forwards for a solid start. Paul O'Connell and man-of-the-match David Wallace were both to the fore, the latter keen to impress in his 200th outing for Munster.

The turnover rate was high as the sides scrapped for every ball, with O'Brien, Jennings and Jamie Heaslip putting their bodies on the line. Leinster patiently worked themselves into the game amid a series of attacks from deep.

One such counter led to a cynical shoulder charge by Marcus Horan on O'Driscoll which was missed by the match officials. However, a subsequent scrum infringement saw Sexton convert his first penalty goal from a central position.

There was little to chose between the sides coming up to half-time and given the balance of play, Leinster would have been pleased to go in just 7-3 behind at the break.

A sparkling run and pass from O'Driscoll got Leinster immediately into scoring range early in the second half. Their forwards battered away at Munster's defensive line until Donncha O'Callaghan was sin-binned for not rolling away in front of his posts.

Sexton took the three points on offer and Munster staved off Leinster's next assault on their line – Strauss, who almost got over from a lineout move, and McFadden, tackled brilliantly by Wallace and James Coughlan, were both thwarted.

A looping pass from Sexton was mishandled by McFadden as Munster were caught for numbers out wide, but the Leinster out-half was successful with a right-sided penalty soon after for a 9-7 lead.

With just 20 minutes remaining, it was anybody's game. After such an absorbing game in Cardiff last Saturday, tiredness seemed to become a factor for the men in blue as Munster got on the front foot again.

They barged back to within metres of the Leinster line, a thunderous tackle from Luke Fitzgerald knocking Howlett to the ground just when a try looked on.

But Munster turned the screw when O’Gara lofted a cross-field kick over to Earls who avoided Isa Nacewa’s initial challenge and scored despite the best efforts of Shane Horgan and O'Driscoll.

O’Gara was narrowly wide with the conversion and watched his 48-metre penalty miss the target, with nine minutes remaining.

However, Leinster’s hopes were extinguished by the concession of a third try. Munster drove them back in two successive scrums close to their line and referee Nigel Owens signalled for a penalty try after the second one.

O'Gara's conversion took the lead to 10 points and although the game was now beyond them, Leinster, with the departing Paul O'Donohoe now on the pitch, were inches away from grabbing an injury-time try. Kevin McLaughlin and Nathan Hines both went close in the dying minutes.