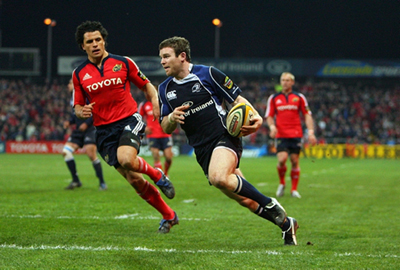 Speaking after the game, Leinster Coach Michael Cheika said: “Our physicality was very good and there were long spells when we were right in the game, but we didn’t take our opportunities.

“I think that it is good for us to have a high intensity match such as this. It was a step up and we need to up that level once more next week.

“They scored two tries from two turnovers and you can’t afford to do that against the top team in Europe.”

Ronan O’Gara kicked Munster into a 6-0 half-time lead with two penalties, while his third effort on 44 minutes edged the hosts into a 9-0 advantage. The Ireland out-half then added a drop goal before Keith Earls’ try on the hour gave the home side a 17- lead.

Credit to Leinster who never gave in and Gordon D’Arcy 73rd minute gave the visitors hope. It was a fine move involving Felipe Contepomi, Isa Nacewa and Shane horgan who added the final pass.

Substitute Denis Fogarty capped the victory with a late try to give Munster the win.