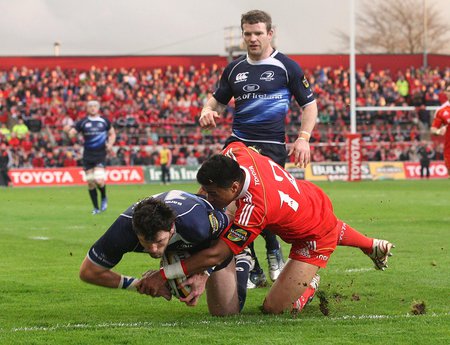 Speaking after the game, Leinster Coach Joe Schmidt said: “We’re obviously very frustrated and disappointed but we will take a look at the game and we know that we have to improved on some areas.

“I was pleased with our discipline and there’s no better place to test yourself than here in Thomond (Park). We managed to keep them tryless, which was fantastic, but we know that we have work to do because it’s getting very congested up there.

“It was very tight, but credit to Munster and congratulations to them.”

Shane Horgan, making his landmark 200th appearance for the province, scored the only try of the game in the first half after 20 minutes, with Jonathan Sexton kicking five penalties and Ronan O'Gara three before the interval.

It was a battle from the off with both out-halves sharing two penalties each but with the score at 9-9 Sexton pushed the Blues into the lead for the first time with a sweetly struck strike on 18 minutes.

Leinster pressed and two minutes later capitalised on some excellent work by Isaac Boss initially and the ball found Isa Nacewa whose punt forward bounced favourably for Horgan who showed great composure to gather and touch down with Lifeimi Mafi hot on his heels.

Though Sexton's conversion fell wide, he would add further penalty strikes on 35 and 38 minutes to give the visitors a 20-9 half-time lead.

Paul Warwick, a temporary substitute for Ronan O’Gara, reduced the deficit to eight points with a 44th minute penalty and O’Gara gathered his composure after taking a blow to the cheek to land further penalties on 48, 52 and 62 minutes to leave the game on a knife edge, 21-20, in the final quarter.

Sexton again pushed Leinster into a slender two point lead with his sixth successful kick, but even though O’Gara missed a 68th minute penalty, he made amends in the final minute to step up and seal a late win for the hosts.