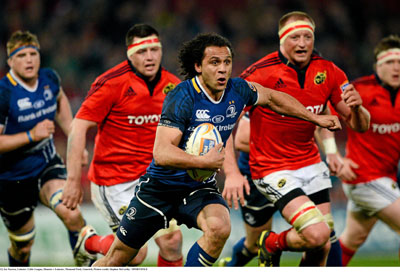 Ronan O’Gara drew Munster level in the 54th minute of this top of the table clash, but Leinster secured the provincial bragging rights and four more RaboDirect PRO12 points with a superior finish.

Jonathan Sexton and Fergus McFadden kicked closing penalties and Ian Madigan, another of Leinster’s talented reserves, landed a fine drop goal to seal only the province’s second win at Thomond Park since 1995.

A series of unsettled scrums and unforced errors made for a scrappy first 40 minutes dominated by referee Nigel Owens’ whistle and Sexton’s right boot, with Leinster establishing a 9-3 interval lead.

Owens sin-binned props Marcus Horan and Mike Ross early in the second period and Munster reacted best with O’Gara getting the home side back on terms.

Speaking afterwards, Isa Nacewa said: “We are exhausted after that. That is the hardest game we have had to play this season.

“Thomond Park is always a tough place to come but we are happy to take the win after that.

“Coming off the defeat to the Ospreys it was a great win, but we still have a lot of things to work on this week. We’ll have to switch things up for next week  (against Cardiff), but we are looking forward to it.”

The much-anticipated interpro derby got off to a typically breathless start with two turnovers in the opening minute and an early try-scoring opportunity for Rob Kearney.

The Leinster full-back knocked the ball on over the try-line as he tried to gather Sexton’s well-weighted kick towards the left corner.

The visitors enjoyed the best of the early territory and Sexton kicked them ahead with a long range penalty in the tenth minute.

It took over 20 minutes for the scrum to settle with Ireland internationals Horan and Ross going down together on a number of occasions. A decision against the latter went unpunished when O’Gara hit the left hand upright.

A bout of loose kicking did little for the game as a spectacle, and while there was a distinct lack of continuity the contest at the breakdown was as ferocious as ever.

Munster got on the front foot after the welcome sight of a clean scrum. Sean Cronin infringed at a ruck in the Leinster 22 and O’Gara duly punished him with the levelling penalty from the right.

Munster were guilty of going off their feet at ruck time on the restart, allowing Sexton to swiftly restore Leinster’s three-point advantage.

Luke Fitzgerald, the liveliest open field runner during a cagey first half, ran out of space when trying to link with Kearney as the Munster whitewash came into sight.

Leinster began to put more phases together in attack as half-time approached, with Gordon D’Arcy, on his 200th appearance, and Kevin McLaughlin carrying well.

A third penalty success for Sexton, after Horan dropped a scrum, put six points between the sides at the break.

Both Horan and Ross saw yellow three minutes into the second half as referee Owens lost his patience with the pair. The next scrum saw Heinke van der Merwe infringe and O’Gara made no mistake with his kick from 40 metres out.

O’Gara missed his next shot at the posts, but was back on target in the 54th minute to level the game after Brad Thorn was penalised for a high tackle.

By the hour mark, Leinster had issued a strong response with Nacewa and Sexton threatening from purposeful attacks. The latter then kicked his final penalty before being replaced by Madigan.

Leinster’s lead may have been a narrow one but there was a better flow to their game at this stage, and Nacewa was soon sprung through a gap from a lineout forcing Munster to scramble back.

A BJ Botha scrum infringement led to McFadden, Sexton’s place-kicking replacement, landing a 70th minute penalty for 15-9 and the tide was turning blue.

Leinster’s experienced bench was a key factor as they ground out the result. A short burst from Cian Healy led to fellow replacement Madigan sending over a snap drop goal and the fast-breaking McFadden was a pass away from creating a late try.

Schmidt’s charges did not need a try in the end as their goal-kicking did the talking for them, completing a season’s double over the Munstermen and leaving them with a 10-point lead at the top of the table with three rounds remaining.