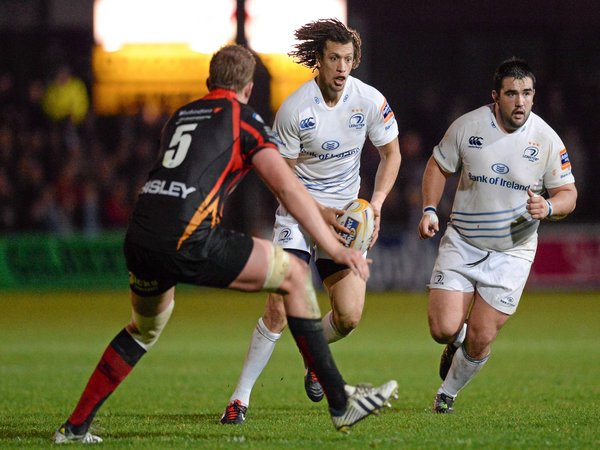 Leinster staved off a late charge from the Dragons at Rodney Parade as two converted tries in the space of five second half minutes proved vital for the visitors.

Clontarf clubmen Aaron Dundon and Noel Reid both touched down for Matt O'Connor's men on the hour mark while Dragons lock Adam Jones was in the sin-bin.

But the province – fielding a much-changed team with 17 players unavailable due to international duty – showed their battling qualities late on to emerge with a tight victory.

The result brought the Dragons' winning run at home to an end, with Leinster the last visiting team to win a league game at Rodney Parade back in March.

Leinster's scrum exerted some early pressure in this round 7 tie, with tighthead Martin Moore again showing well, and Darragh Fanning fastened onto a Jimmy Gopperth kick as the visitors pressed out wide.

Gopperth, whose first penalty attempt missed the target, opened the scoring at the second attempt after Dragons captain Lewis Evans was penalised at a 13th minute ruck.

Luke Fitzgerald was thwarted by a loose pass and good tackling from Pat Leach as the Dragons' defensive line came up smartly.

The breakdown was a hugely competitive area and hooker Dundon did well to force a penalty at a ruck in the Leinster 22, with the action swinging swiftly between both halves of the pitch.

Gopperth missed a drop goal effort and a tight call went against Leinster in the 28th minute when centre Reid was adjudged to have a foot in touch as he released Gopperth for the left corner.

Zane Kirchner, making his first start for the province, had set up the scoring chance with a well-weighted grubber kick. Reid reached it and was just tackled into touch by Prydie before he passed for Gopperth to touch down.

Just past the half hour mark, the Dragons managed to strike for the game's first try. Despite another strong scrum, Leinster were unable to hold onto possession and Richie Rees reacted by tapping a quick penalty and setting the home backs in motion close to halfway.

Impressive running and handling from Leach and Hallam Amos saw the region rampage out to the right, utilising the space afforded to them, and Prydie's pass back inside sent centre Ross Wardle over in the corner.

Tovey knocked over the difficult conversion and Prydie was narrowly wide with another monster penalty shot, but it was clear that the seven-pointer had really energised the Dragons.

Crucially though, Leinster hit back on the stroke of half-time as Gopperth reduced the arrears to 10-6 as the teams headed for the dressing rooms.

The Dragons resumed on the front foot, forcing Gopperth into touch and an offside decision against Leinster allowed Tovey to restore his side's seven-point advantage.

Leinster got some reward for a series of pick and goes through the middle, with stand-in captain Shane Jennings and Fitzgerald leading the charge. Gopperth followed up with the three points.

The third quarter was decidedly scrappy and the next twist came when Dragons lock Adam Jones was sin-binned in the 57th minute for taking out support player Rhys Ruddock in the lineout.

Leinster made their man advantage count immediately as they wore down the Dragons defence around the fringes and a close range rumble saw the excellent Dundon – supported by Quinn Roux and Tom Denton – pile over for a close range try.

Gopperth added the extras for a 16-13 lead and Leinster, using their superior physicality up front, created their second try soon after.

Jennings drew a defender and passed for the onrushing Kirchner to hand off a Dragons defender and tee up Reid for a simple finish to the left of the posts.

Gopperth missed an opportunity to widen the margin when he hit the post with a penalty and the men of Gwent, roared on by the vocal home support, came back into the contest in the closing stages.

Tovey's brace of penalties got them back in touch on the scoreboard and with Leinster replacement prop O'Connell knocking the ball from Jonathan Evans' grasp at a ruck, the visitors had to see out the game with 14 players.

With Michael Bent reintroduced in the front row and Leo Auva'a making way, Fanning stepped in as a flanker for a series of scrums which saw the Dragons press for a match-winning score.

But Leinster determinedly held on near their try-line, in addition to some great defensive covering by Fitzgerald on a kick chase.

A late turnover allowed scrum half John Cooney to boot the ball dead and maintain the province's record of not having lost to a Welsh region in 2013. 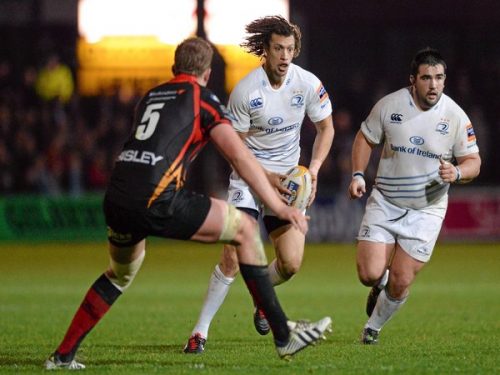