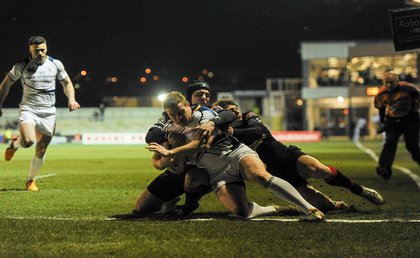 Leinster ran out 26-19 winners over the Newport Gwent Dragons in the RaboDirect PRO12, thanks to a brace of tries each from Sean Cronin and Dave Kearney…

The tries came early on as Kearney’s chip and chase allowed Leinster to attack early and the Dragons never reacted. Sean Cronin went over in the corner after a minute and Madigan converted from the touchline.

The Dragons got a penalty almost immediately from the restart, Steffan Jones showing his accuracy but the floodgates opened in almost the same manner as the first try, Leinster sweeping the ball across from Kearney and quick hands allowed Cronin to touch down for his second try deep in the corner. 12-3 after less than 10 minutes and Leinster looked to be in irresistible form.

The Welsh region were yet to settle with Madigan, Fionn Carr and Kearney’s kicking making them uncomfortable.

The pack also weighed in at scrum time, which is where the third try was scored. Rhys Ruddock retrieved the ball and crashed through the defence, a simple offload later and Dave Kearney was over in the corner. Ian Madigan made amends for his earlier miss by confidently slotting home.

The midfield were running the show and not allowing the Dragons any room, although Steffan Jones got his second penalty on the half hour mark. Jack Dixon was sent to the bin a few moments later which seemed to galvanise the hosts and a Jones drop-goal made it 9-19 just before half time.

On a cool Newport night, the hosts made an instant impression after the restart. Jack Dixon went through the defence and gave the ball to Ieuan Jones to score – the Dragons were suddenly within 5, and looking confident. Strong goal-line defence prevented the elusive 4th try with the Dragons almost breaking for a try of their own.

A crucial period in the tense Rodney Parade atmosphere then as the replacements were wheeled out. Dave Kearney broke the deadlock with his second score after good hands in the 22, Madigan’s conversion extending the lead. And it was one the Dragons never challenged, except at the end when Steffan Jones burst through, failing to convert his own try, but enough to give the Welsh region a deserved point.

Leinster secured the maximum points on St. David’s Day in Wales, with aspirations of overhauling the top two, Glasgow and Ulster, who are the next opponents, when the PRO12 resumes later in March.