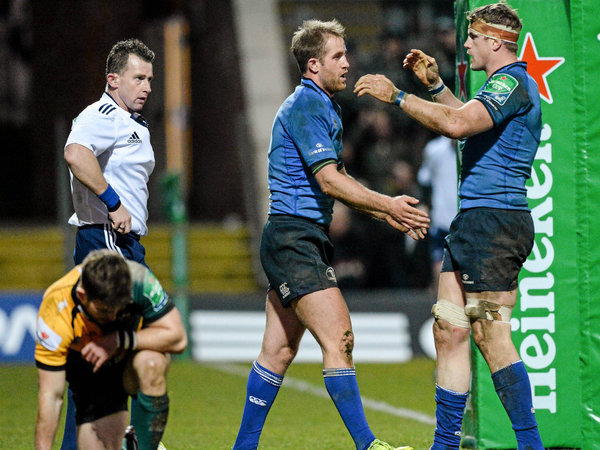 Luke Fitzgerald touched down twice in the opening eight minutes and went on to complete his hat-trick in the second half as Leinster ran six tries past Pool 1 rivals Northampton.

It was a runaway victory for Matt O'Connor's men who now hold a five-point lead at the top of the pool table heading into the return leg against Saints at the Aviva Stadium next Saturday.

Speaking afterwards, Brian O'Driscoll told Sky Sports: "I've got the man-of-the-match but I find that amusing when I saw performances like Luke Fitzgerald's today. I thought he was outstanding. Besides the tries, I thought his energy was fantastic. There were lots of those sort of performances.

"You know when you come to places like Franklin's Gardens that you have to be very physical and your accuracy has to be spot on. I think we managed that.

"We were pretty good, pretty efficient at ruck time, not committing huge numbers but the guys that were there were doing the appropriate job in putting the ball on a plate for Eoin Reddan. I think we were able to get our momentum off the back of that."

He added: "I had fun today. I have yet to finish 80 minutes this season – they’re looking after the old guy! But I’m enjoying it and it’s only my second game in blue this year.

"I love playing for this team. We’ve managed to build a relatively good history in recent years and now it’s about trying to build on that again."

The province produced a frenzied opening to this round 3 tie, hitting the gain-line fast and dominating the collisions as they built the foundations for this fine victory.

Both sides made late changes with a leg injury ruling Cian Healy out and Jack McGrath brought into the visitors’ front row. Leinster also had to cope with the injury-enforced loss of Sean O'Brien after 32 minutes, but by that time they were 19-0 to the good.

Ken Pisi, who was switched to full-back before the kick-off, was exposed in the opening minutes as Leinster ran in two early tries.

Pisi conceded a scrum just inside the Northampton 22 and then he was unable to gather a dinked kick from O’Driscoll which was dotted down in the left corner by Fitzgerald.

From a Devin Toner-won lineout in the 22, Leinster drove up close to the try-line before working the ball out to the left – O’Driscoll’s brilliant between-the-legs pass being the highlight of the move – and Fitzgerald stepped off his left to beat Jamie Elliott and score.

Madigan was unable to convert this time and Saints – looking to extend their seven-match winning run – had some welcome possession in the Leinster half towards the end of the first quarter.

A wayward penalty from Madigan let the hosts off the hook, but Leinster were back to their accurate best when creating a well-taken try for skipper Heaslip.

Heaslip's back row colleagues Rhys Ruddock and O’Brien made the hard yards on the left, bulldozing into the Saints 22 before Rob Kearney evaded two tackles and sent Heaslip sniping in to the right of the posts.

Northampton shunned a long range shot at the posts as they looked to get Luther Burrell and Samu Manoa on the ball in advanced positions.

But Leinster defended the threat comfortably – with Mike McCarthy in the thick of the action – and they duly registered their bonus point shortly before half-time.

Madigan sent the ball skywards from a free-kick, Rob Kearney was first to it and set Leinster up for a sharp set of phases. The influential Reddan dummied and sped through a gap around the fringes and then stepped inside Elliott’s attempted tackle to dot down by the posts.

Madigan added the extras for a 26-0 lead and Leinster resumed on the front foot in the second half. Sean Cronin tore through from deep only to throw a forward pass to Fitzgerald as the winger looked set to grab a hat-trick.

A handling error from Burrell ruined a promising attack for Northampton, while Leinster missed out on another try when Reddan juggled and spilled Fitzgerald’s pass following an O’Driscoll run.

But the gap was widened in the 64th minute when O'Driscoll intercepted a pass from Dom Waldouck and evaded the clutches of Elliott on the way to his 33rd Heineken Cup try.

Madigan made it 33-0 before Northampton responded with their only try of the night. With replacement prop Michael Bent in the sin-bin for an infringement close to the Leinster line, Saints scrum half Lee Dickson squeezed in under the posts for a seven-pointer.

It was no more than a consolation score however, as 14-man Leinster raided downfield and Gordon D'Arcy's left wing break combined with Zane Kirchner's pass off the deck released Fitzgerald for his hat-trick score and a very satisfying finish. 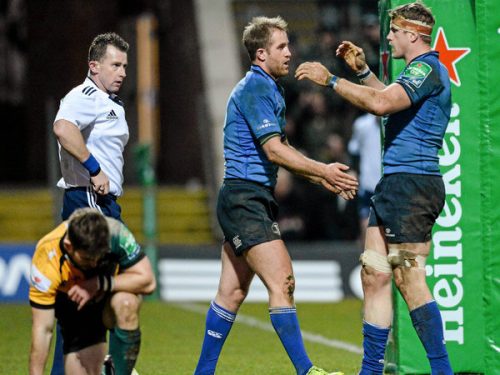