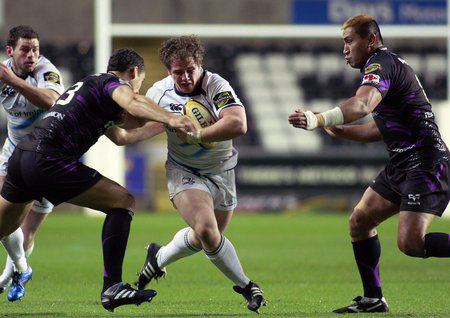 Despite leading at the half-time break, Leinster fell to a 19-15 Magners League defeat away to the Ospreys in the Liberty Stadium on Sunday evening…Schmidt Post Match Reaction…

Speaking after the game, Leinster Coach Joe Schmidt said: “I felt that we created more of the play and more chances, but with a little bit more positivity we could have had even more of the play. I didn’t feel as though they’d score and I was pleased that we broke down their defence maybe half a dozen times.

“We’re disappointed with the result but really proud of how the youth played again. There was a first start for Jason Harris-Wright and I thought he did really well.

“This year is all about getting into the Top four. You have to make the most of your chances and some international guys will definitely need a rest after being involved over the last four weeks.

“We have a short five day turnaround before travelling to Wales again to face the Scarlets and we, like the Ospreys, have won two out of three games in what is a very tough period.”

Leinster opened the game brightly and despite Ospreys out-half Dan Biggar kicking the hosts into a 3-0 eighth minute lead through a penalty, Man of the Match Isa Nacewa levelled the scores eight minutes later after some good work by Isaac Boss.

Welsh prop Duncan Jones’ yellow card on 18 minutes later gave Leinster renewed impetus and an initial burst by Shane Jennings and some good play by Nacewa and Shane Horgan found Andrew Conway who darted into the corner for his second senior try.

Nacewa slotted home the difficult touchline conversion to give the visitors a 10-3 lead.

Biggar reduced the deficit to a single point after successful penalties on 33 and 37 minutes, but Leinster withstood further pressure to lead 10-9 at the interval.

Biggar picked up where he left off with his fourth penalty of the evening in the 41st minute before Nacewa touched down from his own deft kick over the top two minutes later as the pendulum swung once more in Leinster’s favour.

But Leinster’s hopes were dented when Ed O’Donoghue and Ian Madigan separately spent time in the sin-bin. A spell of home pressure led to a penalty try in the 55th minute, which Biggar converted to make it 19-15 and though Leinster battled hard, they could not breach the Ospreys rearguard.

*Leinster are confident that Andrew Conway will recover quickly from the neck injury he sustained during the second half of Sunday’s game and a further update will be available later in the week.