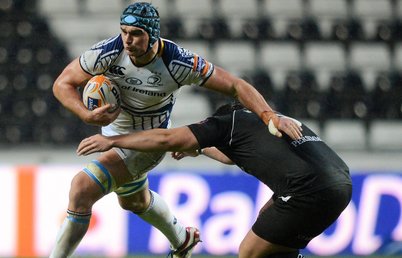 Leinster endured a frustrating evening at a rain-soaked Liberty Stadium as they blew an early 10-point advantage against RaboDirect PRO12 rivals, the Ospreys…

Leo Auva’a grabbed the only try of the opening 40 minutes, profiting from a charge down from his back row colleague Rhys Ruddock.

Ian Madigan converted, adding to an earlier penalty, but the Ospreys fought back to trail by 10-9 at the break with Matthew Morgan kicking three penalties.

Leinster failed to score while Ospreys prop Duncan Jones was in the sin-bin, and the decisive score came on the hour when man-of-the-match Richard Fussell put Eli Walker in for a converted try.

The reigning league champions wrapped up the result with a drop goal from Morgan, denying Leinster a losing bonus point in the process.

The province showed their intentions in the opening seconds, Isaac Boss breaking into space and kicking towards the right corner for Andrew Conway to chase.

Madigan sent a fourth minute penalty through the uprights, punishing Lloyd Peers for a ruck offence, and the visitors had the first sniff of a try soon after.

Fionn Carr chased down Boss’ clever kick into space but lost his balance as he went to gather the bouncing ball near the left corner.

In the very next phase, Rhys Webb’s box kick was blocked down by Ruddock and as the ball spun loose number 8 Auva’a slid in to score to the left of the posts.

Madigan converted for a 10-0 lead as Leinster continued to set the pace, controlling the breakdown and getting debutant Andrew Goodman involved in midfield and the number 10 channel.

Ruddock and Madigan combined to bundle George Stowers into touch as the Ospreys hunted for a response. They got one on the quarter hour mark as Morgan converted his first penalty.

The young out-half added a second successful kick midway through the first half, with the Ospreys achieving better field position and winger Walker testing Leinster’s defence out wide.

Leinster lost Damian Browne through injury but their scrum remained a potent weapon with Jamie Hagan putting Jones under all sorts of pressure.

Another snappy break from Boss had Conway inches away from scoring their second try, Walker getting back to deny his opposite number near the try-line.

The worsening conditions led to a high error count and Madigan miscued a kickable penalty as the interval approached. The last kick of the half saw Morgan cut the gap to a single point.

The Ospreys threatened first in the second period as Walker came close to swooping on Fussell’s well-weighted kick to the left corner.

Morgan dropped a 46-metre penalty short of the target and as Leinster built from the restart through Carr and Auva’a, Ospreys prop Jones earned a yellow card for cynical play at a midfield ruck.

Madigan sent the resulting penalty wide from far out, but direct running from Heinke van der Merwe, Boss and Devin Toner got Leinster back into scoring range.

They missed two more try-scoring chances as Madigan’s slaloming run was ended by the covering Webb, while an advancing scrum amounted to nothing as the Ospreys held out.

Those spurned opportunities proved costly as the Ospreys took a quick lineout and Fussell evaded the clutches of a number of players, setting up Walker for a simple run-in.

Morgan converted and as Leinster failed to capitalise on some strong carries from Brendan Macken, Ruddock and replacement Jordi Murphy, the Ospreys managed to add to their tally.

Joe Bearman and replacement Kahn Fotuali’i marshalled them forward and set up the drop goal opportunity for Morgan to drill over in impressive fashion.