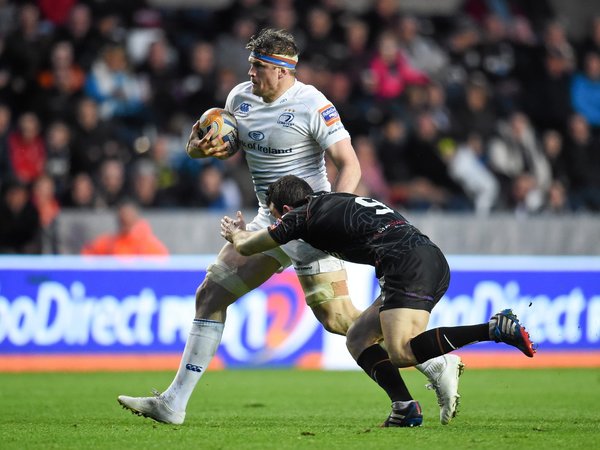 Leinster were competitive throughout with Cian Healy, who put in an immense 80-minute display, crossing for a 37th minute try to cancel out Jeff Hassler's score four minutes earlier.

Jimmy Gopperth converted Healy's touchdown to leave the province just 13-10 behind at the break as they chased their third win in four meetings with the Ospreys this season.

Gopperth's fourth successful penalty brought the table toppers level with 12 minutes left, but Biggar stepped up for the Ospreys when it mattered most as he knocked over a drop goal and a late penalty to seal a much-needed victory.

The losing bonus point will ensure that Leinster still lead the RaboDirect PRO12 at the end of the weekend, however they still have some work to do in order to book a home semi-final – beginning with their Good Friday fixture at home to Benetton Treviso.

Speaking afterwards, Leinster head coach Matt O'Connor said: "We knew it was a tough turnaround in five days with two away matches, and to take a point can be important for us in the run-in.

"There was a lot of effort and character out there, but unfortunately we weren't quite good enough.

"It is tough now, we have three games we need to get maximum points out of to make sure we control where we are and from that end it is going to be very tight.

"We have Treviso, Ulster and Edinburgh. They are good sides so we will have to make sure we are on form, have a handful of bodies back and get maximum points."

Five days on from their European exit, Leinster hit the front in Swansea courtesy of a 10th minute penalty from New Zealander Gopperth who had watched an earlier attempt come back off the post.

Martin Moore, returning captain Leo Cullen and Jamie Heaslip were all prominent early on as the visitors got off to a promising start, benefiting from some beefy carries around the fringes.

Biggar, who hit the woodwork with a drop goal effort, equalised off the kicking tee and then had his only miss of the night after Kevin McLaughlin was pinged.

Leinster fell foul of referee Marius Mitrea's whistle on a number of occasions and their frustration grew as Biggar made it 6-3 before winger Hassler was sent over for a converted try.

The Ospreys' share of territory increased and they made it count as Biggar and full-back Richard Fussell, who was making his 100th appearance for the region, combined to put Hassler into space.

Leinster's famed scramble defence came to their rescue initially, but the Ospreys kept knocking on the door and Hassler was found again by Fussell for a simple finish out wide on the right.

Staring at a 13-3 deficit approaching half-time, Matt O'Connor's men lifted the tempo in timely fashion and their forwards constructed a well-worked seven-pointer for Healy from a lineout maul.

Healy went on to have a storming second half, making yards every time he bulldozed into Ospreys bodies, but he was singled out for an early ruck infringement which allowed Biggar make it 16-10.

The loss of possession between Sean Cronin and replacement Jordi Murphy then ruined a promising attack on the left for Leinster, following on from Healy's bullocking run over halfway.

Both Healy and the equally effective Heaslip threatened in Ospreys territory as they got over the gain-line, however some good approach work was spoiled by a combination of individual errors and tigerish breakdown work from the Ospreys.

Shane Jennings was harshly penalised by Mitrea for not rolling away and Biggar's successful kick extended the margin to nine points.

Gopperth opened Leinster's second half account with a 53rd minute penalty and went agonisingly close to set up a try for Dave Kearney five minutes later. The Kiwi threaded a terrific long pass out to the winger, but Kearney was unable to hold onto it with the try-line at his mercy.

It was in the midst of the purple patch for the visitors though, and they regained possession from the lineout to chip away at the Ospreys defence and win a penalty which Gopperth stuck over.

It looked like Leinster were poised for a comeback win after Gopperth nailed his fourth penalty goal of the night with 68 minutes on the clock.

However, the Ospreys boxed clever in an exciting conclusion to the game and they were able to find holes in the visitors' defence at crucial stages, setting up Biggar for the match-winning scores.

The young number 10 scooped over a drop goal in the 71st minute and Leinster's discipline let them down again late on, allowing Biggar to fire over a penalty from the right and seal a six-point success.

Leinster had their moments in the closing stages. On another night Noel Reid's breakout from a quickly-taken 22-metre drop-out might have led to a score, while replacement Collie O'Shea dropped a pass from Gopperth with a midfield gap in front of him.

Gopperth's fumble of a Luke McGrath pass in the dying seconds saw Leinster cough up possession for a final time as they lost in the league for the first time since December. 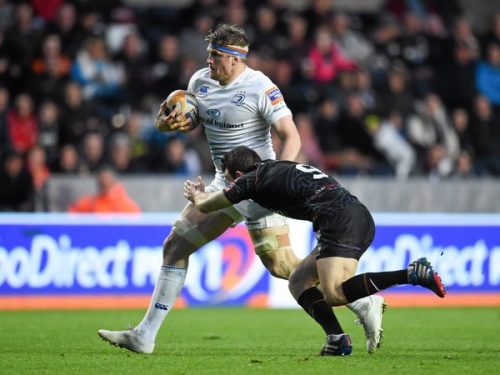