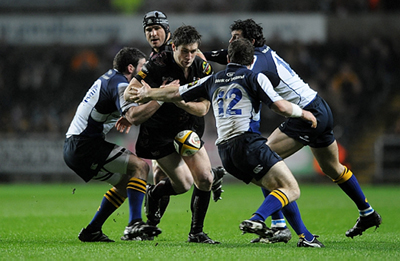 Speaking after the game, Leinster Coach Michael Cheika said: "We played better at the start of the second half with a bit more shape and better continuity and we dominated territory from there.

"We knew that we weren’t playing very well in the first half. I didn’t have to say anything to the guys at half-time because there’s a real commitment in the squad to retain our title. We knew that these two games in Wales would be pivotal, and to win in Wales is no easy feat.

Sonny Parker gave the hosts a first-half lead before Leinster’s Gordon D’Arcy charged over when the Ospreys were without sin-binned Filo Tiatia after excellent work from Felipe Contepomi.

Contepomi added the conversion to his two penalties to seal victory.

*Isa Nacewa was stretchered off in the first-half with a knee injury. Chris Whitaker and Sean O’Brien came through unscathed, while It is hoped that both Leo Cullen and CJ van der Linde will be in contention for selection for the Ulster match on March 29th.