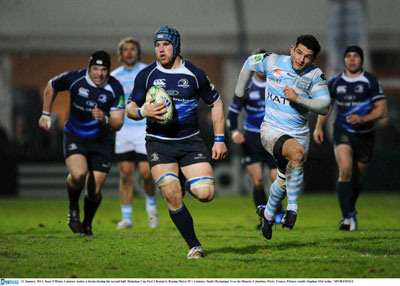 Speaking after the game Heineken Man of the Match Sean O’Brien said: “It was a good performance. Even though we had already qualified (for the quarter finals) we really wanted a home draw and we’ll take confidence going into that game after our efforts in the pool stages.

“It has been a good last few weeks across the board and it’s nice to get that win for the supporters. We had a job to do and we’re pleased that we managed to do it.”

Puma out-half Juan Hernandez kicked the hosts into a 2nd minute lead when he slotted home a penalty. Leinster weathered the early onslaught and with Sean O’Brien and Cian Healy to the fore it came as no surprise when Isa Nacewa crossed for his second try in successive rounds eight minutes later after a fast wide move.

Jonathan Sexton added the points to give the Blues a 7-3 lead. Though Hernandez’s 14th minute penalty fell wide of the posts, centre Virimi Vakatawa gathered the re-start and sprinted up the wing to held regain the lead.

It was the kick-start the visitors needed and four minutes later some quick thinking by scrum-half Isaac Boss found O’Brien who burst clear. Sexton’s two-pointer pushed Leinster into a six point lead.

Rhys Ruddock, fresh from his international call up earlier in the week, displayed real dynamism with a 40 yard burst two minutes later and soon afterwards Sexton was celebrating the province’s third try of a bitterly cold Parisian evening when Luke Fitzgerald, Nacewa and some outstanding vision from Gordon D’Arcy combined to provide space for the out-half to weave in and score.

His conversion made it 21-8 on 23 minutes as Leinster twisted the knife and though Hernandez reduced the deficit to ten points with a 38th minute penalty, Leinster were on course for the coveted home quarter final tie.

Sexton’s 53rd minute penalty was just reward for a spell of Leinster pressure and eight minutes later he finished a well-worked team effort as the lead was extended to a seemingly unassailable 18 points.

With the bonus point in the bag, Brian O’Driscoll chipped in with the province’s fifth try when he snuck through a trademark gap on 67 minutes, with Sexton again converting, to seal an emphatic victory in front of close to 1,000 travelling Leinster supporters.