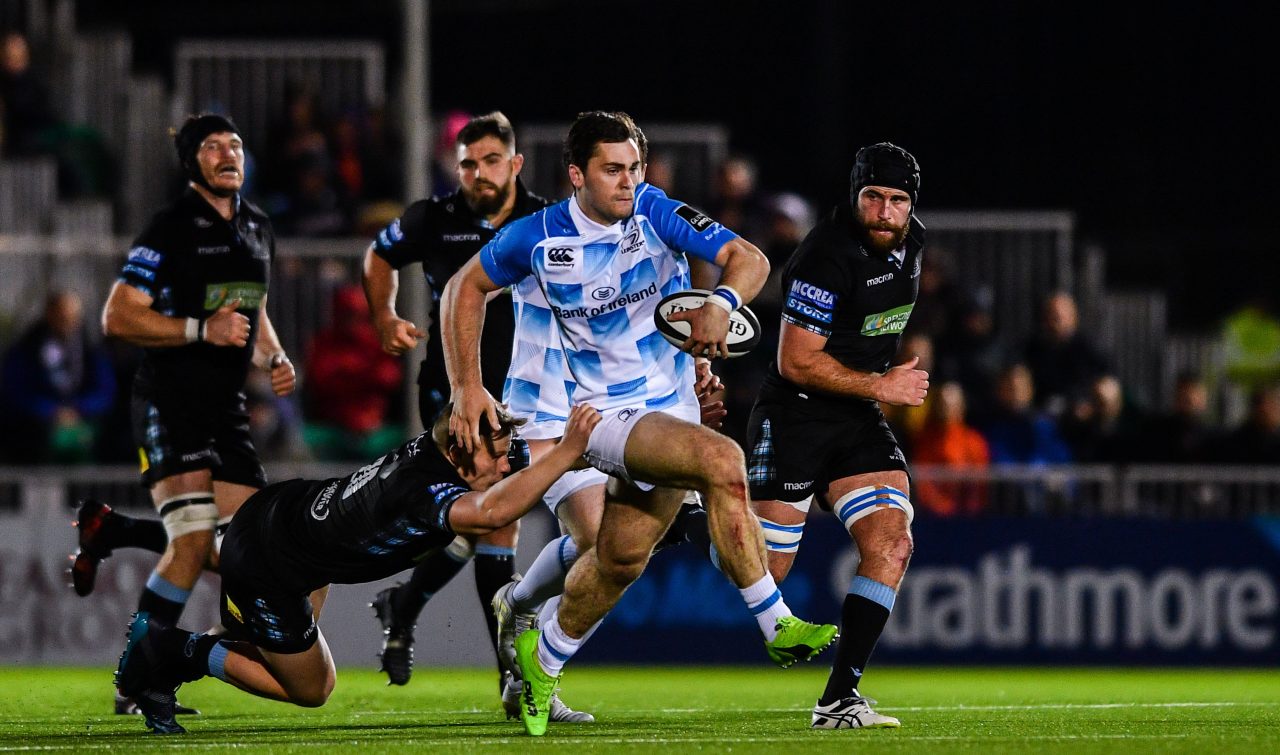 A young Leinster team missed out on one and potentially two bonus points, as Glasgow Warriors’ four-try first half salvo proved enough for them in a pulsating Guinness PRO14 contest.

Tonight’s inter-conference tie at Scotstoun Stadium will be remembered for a breathless first half full of attacking rugby and leaky defences at both ends of the all-weather pitch.

Despite converted tries from Jamison Gibson-Park and Rory O’Loughlin inside the 10-minute mark, Leinster allowed Glasgow to storm back and take a 31-14 lead into the break.

The Leinster defence was cut open far too many times, scrum half George Horne and New Zealand-born centre Grigg both touching down twice to give Warriors a 23rd-minute bonus point.

Peter Horne’s penalty, 10 minutes later, ended up being their final score of the night, with much-changed Leinster lacking the clinical edge that was so evident in their last five wins.

Adam Byrne’s early second half try, crisply converted by Ross Byrne from the touchline, made it a 10-point game, but Leinster failed to profit from yellow cards dished out to Glasgow’s Scott Cummings and Alex Dunbar.

While there was obvious frustration to leave Scotstoun without a point, full-back Jordan Larmour built on his try against Ulster with some excellent footwork and lines of running in attack, while Conor O’Brien, with 72 minutes under his belt, and late replacement Josh Murphy both won their first senior caps.

Minus 13 of the players who had won here in the Champions Cup last month, Leinster caught Glasgow on the hop with an early scrum penalty and a terrific jinking run from Larmour. After a Sean Cronin carry close to the posts, scrum half Gibson-Park was quick off the mark to score from the ensuing ruck.

Ross Byrne converted his half-back partner’s fourth-minute try, before winger Matawalu initiated Glasgow’s response. He broke from a ruck and linked with George Turner who fed George Horne, the 22-year-old brother of out-half Peter, to make it seven points apiece.

These two attack-driven teams went at each other hammer and tongs, Leinster gaining ground in the maul and through strong carrying from Scott Fardy, Mick Kearney and Max Deegan. The latter was hauled down with the try-line in sight, but numbers on the right saw O’Loughlin cut inside Matawalu to touch down, with Ross Byrne’s second conversion restoring the seven-point lead.

That was as good as it got for Leinster in the first half, with man-of-the-match Matawalu continuing to cause problems from all areas of the pitch. His clever break from deep led to a furious assault on the visitors’ line and Grigg was able to touch down despite the best efforts of Larmour and Ross Byrne.

Jordi Murphy saw yellow from preventing a quick tap penalty in the Glasgow half, and the Conference A leaders took full advantage to add two tries to their tally while the Leinster flanker was off. Leo Cullen’s men successfully defended a maul before Tim Swinson made a timely incision, clearing the way for scrum half Horne to grab his second converted score.

Leinster then made it far too easy for Matawalu to weave his magic in an attack that began right on the Glasgow line. A couple of missed tackles allowed the flying Fijian to tear up into the Leinster 22 and pass for Grigg to register the bonus point. Peter Horne added his fourth conversion.

Horne tagged on a penalty after the Leinster defence had been opened up out wide again. However, either side of that kick, Leinster exerted enough pressure to score at least one try in response. Penalties tucked into the corner by Ross Byrne yielded no points, including a late malfunctioning lineout that really let Glasgow off the hook. Before that, number 10 Byrne had pushed a central penalty wide of posts.

However, Cullen’s charges improved their play on the resumption, going the direct route again through the forwards. Cummings was promptly sin-binned for a lineout infringement as Leinster attacked just a few metres out, and in the very next phase, the province passed wide for winger Byrne to stand up Matawalu and squeeze over in the right corner past the two covering defenders.

TMO Jim Yuille confirmed the grounding and Ross Byrne coolly curled the conversion over from right to left, reducing the arrears to 31-21. Leinster had half-an-hour to get even closer, but the next score remained agonisingly out of reach.

Gibson-Park and Fardy led Leinster’s drive for a fourth try and although the province had territorial dominance, lineout errors and turnovers produced by the determined home defence made for a scoreless and scrappy conclusion.

A slick counter-attacking run by Larmour in the 53rd minute offered promise, only for O’Brien’s low-slung pass to be knocked on by Dave Kearney. Then, an Adam Byrne break had no end-product after Glasgow stood firm at a five-metre scrum.

Repeated infringements close to the Glasgow whitewash saw replacement Dunbar binned for no clear release after he tackled O’Brien in scoring range, but Leinster were turned over at the resulting lineout maul as 14-man Warriors dug deep to protect their line.

Poor decision-making and individual errors spoiled the visitors’ attempts to build a score in the final quarter of an hour, allowing Glasgow to see out their eighth successive PRO14 win of the season. 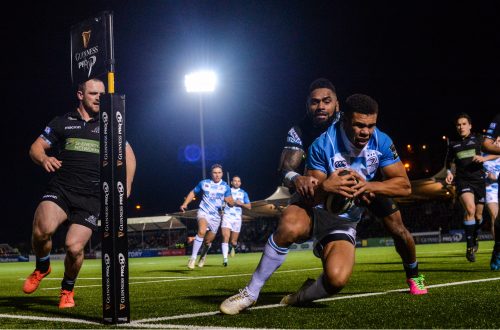 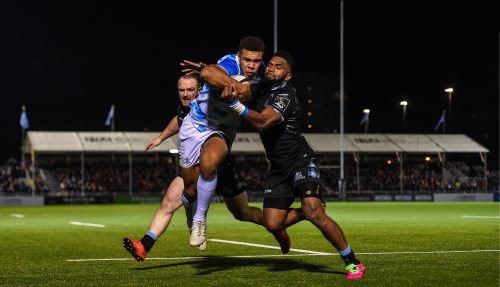 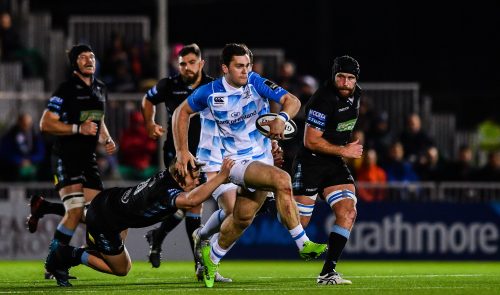 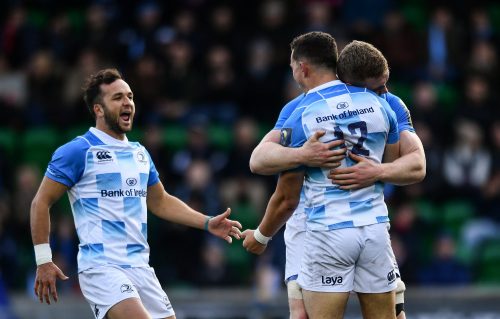 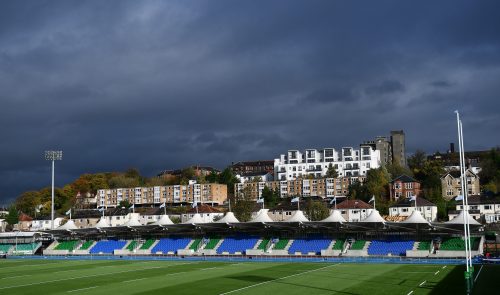 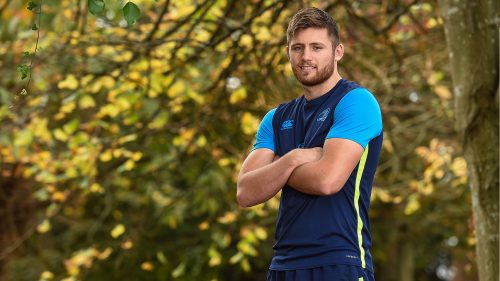 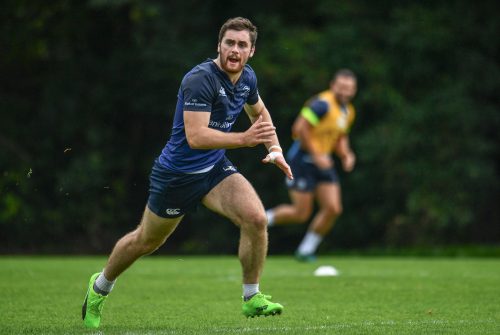 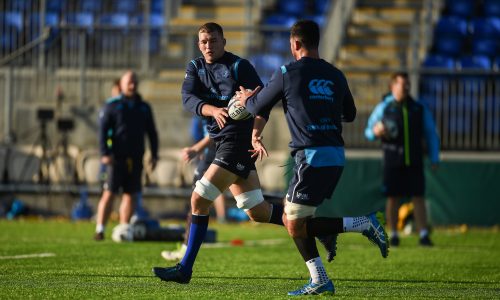 VIDEO: Molony on young players stepping up during international window 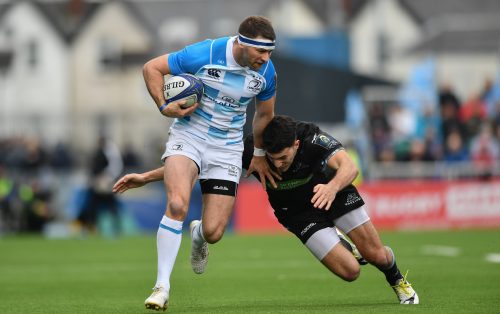 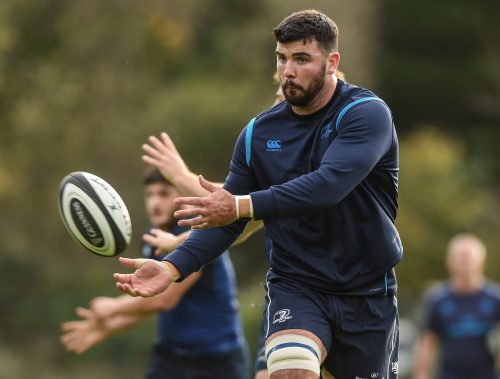