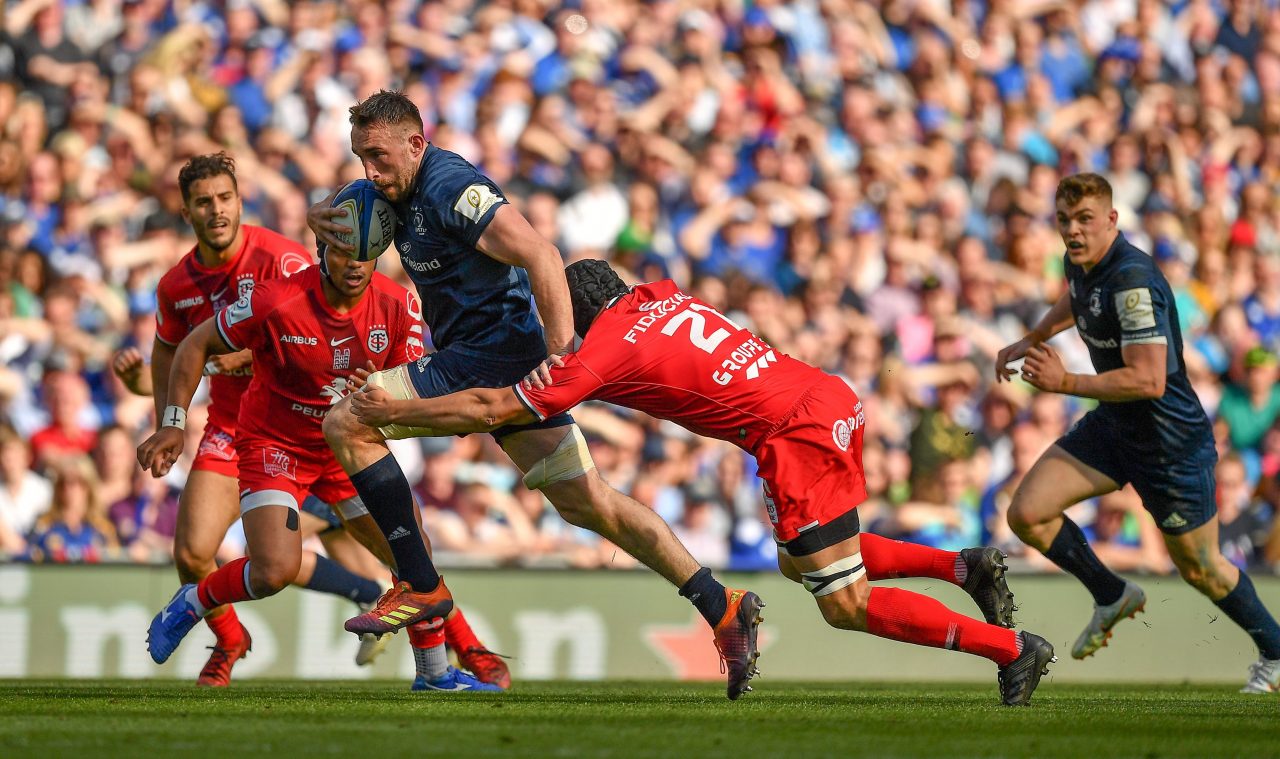 Next month’s Heineken Champions Cup final will be an Anglo-Irish affair after defending champions Leinster Rugby impressively dispatched Toulouse 30-12 at the Aviva Stadium.

Fit-again captain Jonathan Sexton was back in command as Leo Cullen’s men set up an intriguing decider with unbeaten Saracens at St. James’ Park on Saturday, May 11 (kick-off 5pm). James Lowe’s sixth try in eight European appearances, combined with a Luke McGrath maul effort and Sexton’s assured kicking, had them 17-6 ahead at half-time.

Thomas Ramos’ penalty brace kept Toulouse in the contest, with both sides coping well during first half sin-binnings for Richie Gray and Robbie Henshaw. Leinster also absorbed the losses of an ill Rhys Ruddock, who was withdrawn pre-match, and the tournament’s joint-top try scorer, Sean Cronin, who injured his right leg in the 33rd minute.

Ruddock’s replacement Scott Fardy crossed in the 52nd minute, sandwiched by penalties from Ramos and replacement Romain Ntamack. Man-of-the-match Sexton completed his 12-point haul with 15 minutes remaining, Leinster keeping a frustrated Toulouse try-less and adding a late Ross Byrne penalty as they advanced to their fifth European final in 11 years.

Young full-back Ramos curled over a fifth-minute penalty from the right, rewarding a powerful start from the resurgent French club which saw Rob Kearney make an important tackle on Cheslin Kolbe. Charlie Faumuina was pinged for not rolling away five minutes later, allowing Sexton to draw the hosts level in front of a 42,960-strong crowd.

Following an overcooked restart from Ramos, Leinster’s attack ignited as they rumbled through nine phases. Their running angles and power in the carry got them over the gain-line and Sean O’Brien set up winger Lowe to beat Sébastien Bézy’s tackle and score in the left corner past Rynhardt Elstadt. Sexton swept over a classy conversion for a 10-3 lead on the quarter hour mark.

South African speedster Kolbe threatened from a kick chase, and in Toulouse’s eagerness to attack from deep, a Ramos kick was charged down by Henshaw. The ensuing pressure saw Gray binned for a sly hand at a ruck, and Leinster duly punished him with a well-executed lineout maul sending McGrath over for a 25th-minute converted try.

Nonetheless, it was 14-men apiece after Henshaw’s deliberate knock-on of a pass destined for prop Faumuina, just metres on the Leinster line, as Toulouse stormed back. Ramos’ close-range kick was the final score of the opening half with Leinster missing out on a cracking late Lowe try due to Jack Conan’s obstruction in the build-up.

Ramos’ right boot punished a Garry Ringrose high tackle on the restart, but Leinster went for the jugular after Ringrose’s half-break and a clever Sexton kick which forced Kolbe to concede a close-in lineout. Winning two penalties, the hosts battered away before good work from Jordan Larmour and Cian Healy put flanker Fardy stretching over for a seven-pointer near the right corner – 24-9.

Toulouse’s bench got them on the front foot, Ringrose saving a certain try from Maxime Médard’s chip over the top. Ntamack mopped up with the three points, his introduction moving the dangerous Antoine Dupont to scrum half. But that kick was cancelled out in the 65th minute by Sexton in his final act, with Elstadt the guilty party for an off-the-ball tackle.

The Top 14 outfit continued to be foiled by Leinster’s fiercely-determined defence, this time Larmour swooping in to intercept close to his line and deny Yoann Huget a try. The visitors’ race was run and with Ringrose finding gaps and Lowe agonisingly close to a deserved second try, it was left to replacement out-half Byrne to boot the title holders to an 18-point winning margin.

21-year-old talent Caelan Doris came on to make his Champions Cup debut during the final minutes, with young Academy scrum half Hugh O’Sullivan also sprung from the bench along with experienced prop Michael Bent, who made his presence felt with some strong carries on his first European appearance since October 2017. 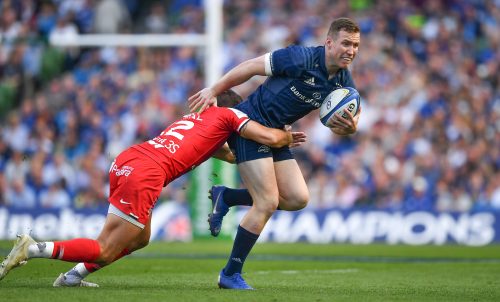 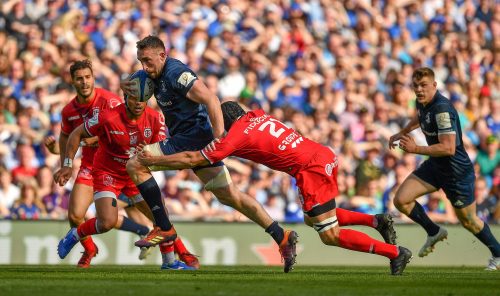 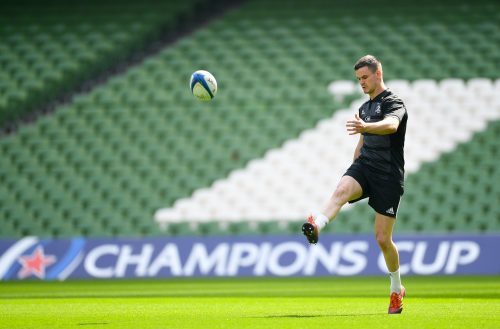 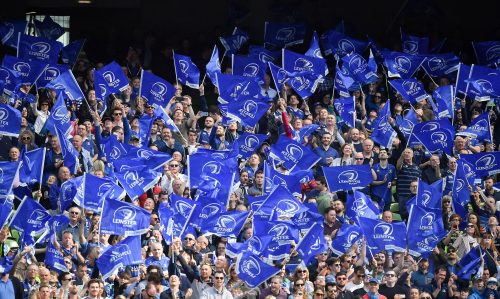 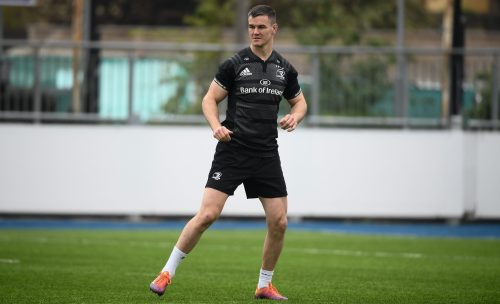 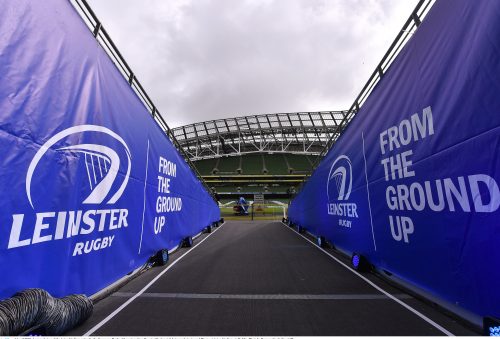 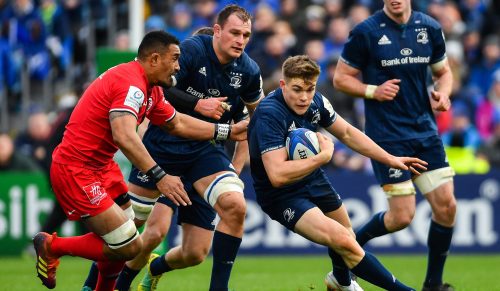 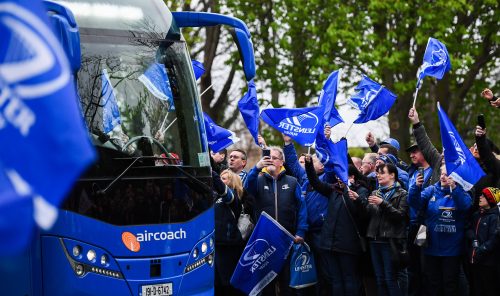 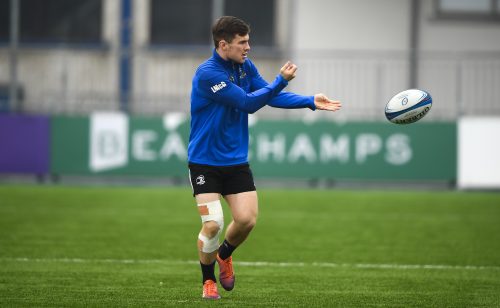 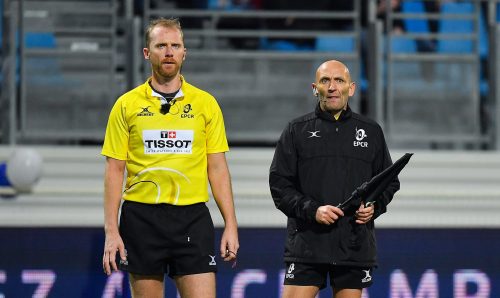 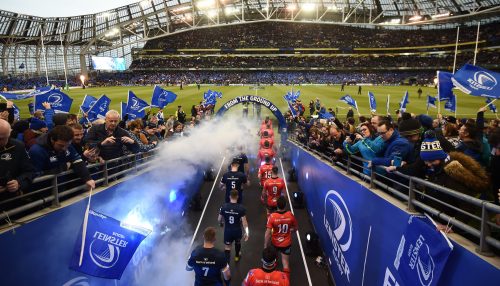