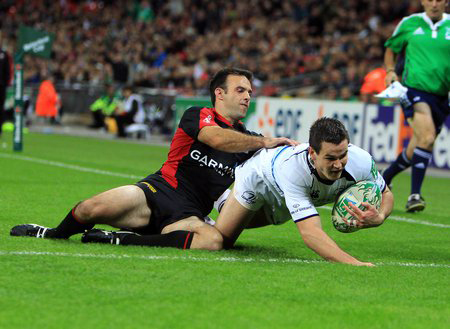 Speaking after the game Heineken Man of the Match Jonathan Sexton said: “It feels good (to win) but we made it hard for ourselves at the end because we gave away too many penalties. The key when you’re playing away from home is to build your scores and that’s the case against a quality side like Saracens.

“A week’s practice under my belt did me the world of good and, looking back, last week’s rest was the right thing for me. We have to play Clermont back-to-back so we’re by now means home clear now because we know that we’re in a very tough pool.

“I thought that it was a really good squad effort and we have full confidence in our squad. I felt that some of the younger players like Fergus (McFadden) really stepped up again today.”

Leinster out-half Jonathan Sexton kicked the Blues into an early 3-0 lead with a penalty that was helped by the assistance of the crossbar, but full-back Alex Goode struck back for Saracens after 11 minutes with a well-worked try out wide.

Derick Hougaard, unsuccessful with his first two kicks at goal, slotted home a 15th minute penalty to make it 8-3 to the hosts. Credit to Leinster who kept the pressure on and Sexton kicked his second penalty in the 21st minute.

Saracens were adjudged to have held on to the ball too long at the breakdown, gifting Leinster a penalty in front of the posts which Sexton drilled home with 27 minutes on the clock.

With Sean O'Brien, Jamie Heaslip and Devin Toner showing real grunt up front in a strong all-round forward effort, it was only a matter of time before Leinster extended the lead which they did again through Sexton in the 44th minute with a penalty.

In the 52nd minute Rob Kearney, outstanding under the high ball all night, fed Isa Nacewa who released the onrushing Sexton who raced through to score in the corner. The St. Mary's man added the touchline conversion to make it 22-11 to Leinster with a half hour remaining.

Goode penalties on 56 and 62 minutes reduced Leinster's lead and though Sexton added another penalty on 63 minutes, Goode reduced the deficit to five points. Goode's fourth successful kick on the night set up a tense finale, but Leinster's resolute defence held out to seal a gritty victory in the home of English football.