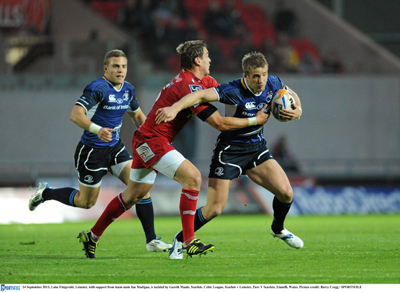 Speaking after the game Man of the Match Isa Nacewa said: “It was definitely a case of job done because we knew coming over that the Scarlets were going to be pumped up for this (5,000th) game.

“We came over to play and were positive throughout and after last weekend’s defeat it was important that we put in a better performance and got the win. We’re pleased but we know that there are areas to work on so we’ll address those things during the week ahead of the Aironi game next weekend.”

With greasy conditions underfoot welcoming both sides at an overcast Llanelli, neither side asserted themselves in the early exchanges. Academy back-row forward Jordi Murphy, making his first competitive start for the province after his substitute appearance last weekend, foraged effectively.

In fact Leinster almost claimed the first points of the evening when a move involving Luke Fitzgerald, Isa Nacewa and Fionn Carr almost breached the Scarlets’ rearguard. From the ensuing passage of play a Madigan crosskick almost found the advancing David Kearney but the ball rolled over the goal-line into touch.

From the re-start the hosts rallied and a scrum infringement led to a Dan Newton penalty effort on 13 minutes, but the kick fell inches wide of the upright. However four minutes later he made amends with a three-pointer to give the home side a 3-0 lead.

Leinster bounced back and an offside infringement three minutes later led to a Nacewa penalty in between the Scarlets 22 and 10 metre lines and the full-back slotted home the kick with ease to level the scores, 3-3.

In the 25th minute Nathan White almost enjoyed a dream start for the province when he intercepted a Ruki Tipuna pass in midfield but referee John Lacey brought the sides back for an earlier knock on as a try beckoned for the Kiwi prop.

The topsy-turvy nature of the first half continued, largely dictated by the slippery ball, though Leinster enjoyed the lion’s share of the territory. A Richardt Strauss offload in the 35th minute found Heinke van der Merwe inside the Scarlets 22 but the ball unluckily squirted forward on the ground as the South African prop was tackled causing the move to break down.

Skipper Rhys Ruddock was the instigator of Leinster’s most promising forward drive though as the half drew to a close and the jinking feet of Madigan and Fitzgerald earned the visitors a penalty in the 39th minute which Nacewa had little difficulty in slotting home to double Leinster’s points tally and give the Blues a 6-3 half time lead.

Leinster began the second half with great zeal instigated by a wonderful Nacewa break led to a penalty which he again slotted home to extend his side’s lead to six points. But the Scarlets touched down for the first try of the evening in the 47th minute when winger Lee Williams sprinted clear to score to reduce Leinster’s lead to a point and Newton added the extras – having missed a penalty a minute earlier- to make it 10-9 to the hosts.

Leinster didn’t have long to dwell on the deficit however when Nacewa slotted home his fourth successful penalty of the evening, in an infringement which saw Scarlets wing-forward Rob McCusker spend time in the sin bin after a series of penalty concessions by the hosts, to push Leinster into a 12-10 lead.

And two minutes later Nacewa made it five successful kicks from five attempts to give Leinster a deserved 15-10 advantage. In the 67th minute a Newton penalty fell wide of the posts and some fine work on the floor by hooker Richardt Strauss a minute later earned Leinster a penalty as the Scarlets again looked to strike out wide.

Madigan’s clearance eased the pressure and from the ensuing lineout the Leinster pack drove on forcefully and Leinster maintained that momentum in the closing minutes to grind out an excellent win on the road in a contest which marked the Llanelli based side’s 5,000th competitive fixture.