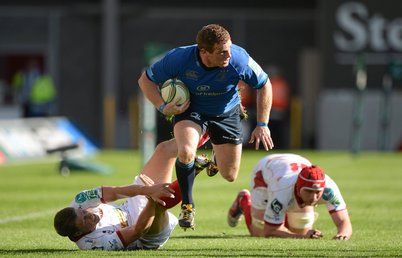 Leinster’s defensive control and their ability to take the few scoring opportunities on offer were vital as they built an 11-0 half-time lead at Parc y Scarlets.

Isa Nacewa crossed for a 10th minute try and Jonathan Sexton booted two penalties as Joe Schmidt’s men bettered their RaboDirect PRO12 rivals at the breakdown and the set piece.

The second half was a more even affair with a slick seven-pointer from Gareth Maule giving the Scarlets plenty of encouragement as they tried to avoid their second defeat in Pool 5.

But despite losing full-back Ian Madigan to a 73rd minute yellow card, the defending European champions ran out worthy winners with their dominant scrum setting up Sexton for the clinching penalty.

Speaking afterwards, Leinster captain Leo Cullen said: “I thought we started the game pretty well, showed good intent and were pretty clinical off a few set phases. Isa obviously got over for the try in the corner.

“Llanelli came back into the game after that and it turned into a bit of a dog-fight. Thankfully we did enough at the end and we’re pretty happy obviously just to get the four points.

“I thought we had better intensity this week. It’s good to get a bit of momentum, we would have been chasing ourselves if we hadn’t got any points out of today. This puts us on eight points and puts us in a decent position (in the pool).

“Hopefully we’ll have a few more guys back when it comes to the back-to-back games in December. It’s good to build on, it wasn’t glamorous at times but we did enough to get over the line.”

Samson Lee and Johan Snyman infringed at the first ruck of the game, allowing Sexton to kick the visitors ahead inside two minutes.

Damian Browne dislodged the ball from Phil John’s grasp as the Scarlets, wearing their changed white strip, looked for an immediate response.

Leinster then threatened out wide through Nacewa after good variation from a lineout, however the Scarlets forced a knock on close to their try-line.

Leinster pushed on and armed with a penalty advantage, Sexton hung up an inch perfect cross-field kick for Nacewa to gather under pressure from George North and get the touchdown.

Sexton’s conversion from the left touchline went past the right hand post, the early tempo being set by the visitors’ intensity at the breakdown and accuracy on the ball.

Rhys Priestland was wide with his first penalty attempt, from close to halfway, and the returning Gordon D’Arcy continued his spritely start with a poach on the ground.

Sexton landed his second successful penalty at the end of the first quarter, punishing Maule for going offside, before the Scarlets roared back downfield.

A strong maul drive from the Welshmen had them metres away from the whitewash and it took a committed challenge from Eoin Reddan to prevent North from dotting down a kick in the right corner.

Leinster got back on the front foot, Sexton prodding through some intelligent kicks and Jamie Heaslip, Kevin McLaughlin and the excellent Shane Jennings were all prominent in the physical exchanges in the loose.

The Scarlets clawed back more territory as the interval approached, but Leinster remained in control of an ultra competitive breakdown area – as evidenced by Brian O’Driscoll’s sheer graft to win a late penalty.

Priestland dropped a long range penalty short of the uprights, two minutes into the second half, and Leinster built on their lead soon after.

Sexton gathered a loose clearance from Liam Williams before smacking over a superb drop goal from distance to make it 14-0 to the visitors.

The Llanelli side got off the mark in the 47th minute though, Priestland giving them a much-needed lift with a well-struck penalty.

Sexton was off target when presented with a chance to reply, as a couple of Leinster errors invited the Scarlets forward and they grasped a rare try-scoring chance.

Off a lineout near halfway, Priestland passed for Maule to break through a gap between O’Driscoll and Nacewa and he evaded the former’s last-ditch tackle to finish off a fine solo try.

Priestland nailed the difficult conversion from the right to reduce the arrears to four points closing in on the hour mark.

Sexton swung over a penalty to settle Leinster down again, following a scrum infringement, although a period of better ball retention from the Scarlets made for a tense final quarter.

Nerves were evident as Priestland suffered a third penalty miss and Sexton kicked out on the full from the resulting drop out.

But a strong spell of scrummaging from Schmidt’s side put them back in match-winning fettle.

Man-of-the-match Mike Ross got the upper hand on Phil John in a midfield scrum as Leinster drove forward in the set piece and Sexton kicked the resulting three points.

The province saw out the game down to 14 men, however, after Madigan was sin-binned for a challenge on Williams as the Scarlets full-back tried to gather a high ball.

There were no further points though as Priestland missed the immediate penalty and Sexton was unable to find the target following another scrum surge from the industrious Leinster pack.