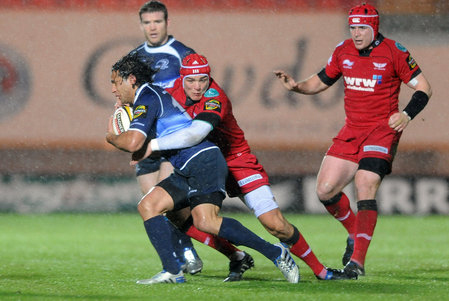 Speaking after the game Sean O’Brien said: “Everyone’s a little bit disappointed but with that we realise how difficult it is to win away from home in the Magners League. We showed good patience, but collectively we’re not overly happy with the first half performance.

“Conditions dictated that it wasn’t going to be good on the eye, but we’ll take this as good preparation physically for another massive game next week. It was a short turnaround this week and I thought the lads prepared well in the conditions and the next nine days are all about looking after ourselves in the lead up to Clermont.

“Personally I felt a little bit rusty because I haven’t played too many games over the last few weeks. I thought I improved as the game went on and I was delighted to get 80 minutes under my belt, but I wasn’t overly happy with some errors in the first half.

“Although there’s a little bit of satisfaction in that we didn’t lose, the game was there for the taking at the end.”

The Scarlets almost opened the scoring when wing Morgan Stoddart was denied a try as his hack through was defended by Shane Horgan’s extended hand as the Boyne man tracked back.

A minute later Rhys Priestland slotted home a penalty after an infringement at a lineout to make it 3-0 to the hosts.

Leinster displayed doggedness in defence and though the Tavis Knoyle / Priestland axis asked questions of the Blues' defence, at separate intervals Fergus McFadden and Sean O’Brien were to the fore as the defence stood up.

Leinster rallied and made territorial inroads in grim and greasy conditions in Llanelli and a wonderful cross-kick by Jonathan Sexton found Horgan on the touch-line whose clever overhead pass found Eoin O’Malley who raced clear for his first try in Leinster colours after 14 minutes.

Knoyle was denied a try by Horgan’s superb defence moments later following a David Lyons steal at a ruck and Leinster weathered the storm with skipper Leo Cullen and Mike Ross leading the way. Priestland’s 27th minute penalty edged the Scarlets into a 6-5 lead, before the Scarlets out-half added his third successful penalty eight minutes later to give the hosts a four point half time lead.

With the Leinster pack making powerful inroads early on it was only a matter of time before the Blues’ spell of pressure was rewarded, but Sexton saw a 52nd minute penalty effort fall wide of the posts.

A double substitution, with internationals Nathan Hines and Shane Jennings entering the fray, bolstered the Leinster pack but Ruddock was harshly yellow-carded and Priestland added the resulting penalty to make it 12-5 to the Scarlets before Gareth Maule’s try in the corner in the 64th minute further extended the lead.

O’Brien and substitute Clint Newland gave Leinster fresh impetus once more as O’Malley probed but it was the industrious McFadden who capped off a fine move involving Hines to reach the line for a 71st minute try. Sexton missed the conversion attempt but Leinster were now within seven points of the hosts as they pressed.

A Priestland penalty three minutes later fell short of the posts as the excellent O’Brien led the charge and a clever piece of play by the Tullow man found Sexton who released Horgan on the right wing to score his side’s third try of the night. Sexton slotted home the conversion to level the scores at 17-17 as the game drew to an exciting finale.

In the last minute of play Leinster probed the Scarlets defence but they could not snatch the victory their second half efforts deserved.