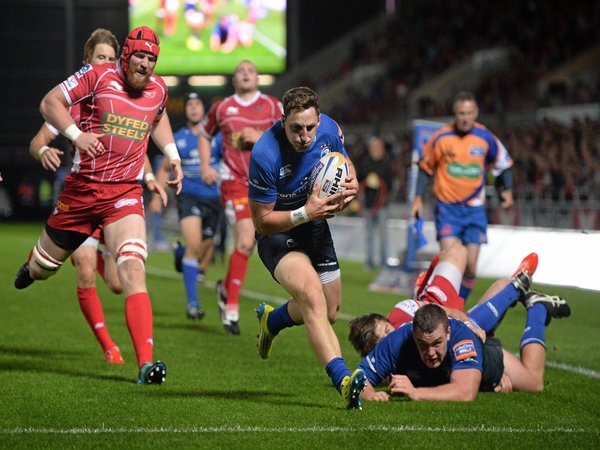 Leinster cut loose for three tries in the final 12 minutes as the challenge posed by a near full-strength home side petered out at Parc y Scarlets.

There was little between the teams over the first hour, but tries from replacement Darren Hudson, league debutant Jimmy Gopperth and Dave Kearney completed an impressive first competitive outing for new head coach Matt O'Connor.

It was a resilient display from the province given that they had Kearney and Hudson sin-binned early on in both halves, and lost prop Jack McGrath to a third yellow card in the closing stages.

Martin Moore marked his first senior start with a well-taken try in response to Rob McCusker's initial touchdown, the Scarlets establishing a 13-7 lead with Steve Shingler landing eight points from the kicking tee.

Kiwi out-half Gopperth and his opposite number Shingler added a penalty apiece in an evenly-contested second quarter, leaving the Scarlets 16-10 ahead at half-time.

Leinster seized the lead thanks to a Jordi Murphy try on the resumption and Gopperth's accurate right boot kept them four points ahead until the tries sewed up the result – a complete reversal of Leinster's 45-20 defeat in the opening round here last season.

The visitors were forced into a late change as Brendan Macken replaced Fergus McFadden at outside centre and Hudson was added to the replacements bench.

The Scarlets enjoyed a free-flowing start, mauling forward from an Aaron Shingler-won lineout and the same player, collecting a short pass from the returning Rhys Priestland, made ground through midfield.

A forward pass from Aaron Shingler was missed by the match officials and the Scarlets duly forced a ruck penalty, the three points being tucked away by new signing Steve Shingler in the fourth minute.

Barely two minutes later Leinster were down to 14 men. Full-back Kearney was sin-binned for a high tackle on Scott Williams who had made a slashing midfield break and pinned his ears back for the left corner.

The resulting penalty was stroked home by Shingler from the left but good ball retention from Leinster debutant Darragh Fanning led to them drawing a penalty from Josh Turnbull. Unfortunately, Gopperth's kick from the halfway line fell away to the left of the posts.

The Scarlets continued to make headway with Aaron Shingler slicing through. Leinster were guilty of some poor tackling and McCusker was released to finish under the posts. Replays showed that the Scarlets captain had lost control of the ball before crossing the try-line, but TMO Derek Bevan gave the go-ahead for the score to be awarded.

Leinster were quick to respond as Macken's precise pass set up Luke Fitzgerald for a chip and chase on the left hand side. It forced a lineout in the 22 and good work from the forwards created a maul drive from which young prop Moore crashed over.

Gopperth did well to add the extras from a tight angle on the left. Leinster's scrum was particularly solid in the first quarter and they tightened up in defence approaching the half hour mark, with Shane Jennings, Tom Denton and Rhys Ruddock being particularly prominent.

The Llanelli outfit were slow to roll away at times, good carrying from Sean Cronin and Jennings setting up a 32nd minute penalty opportunity for Gopperth who nailed the kick for 13-10.

Mike Ross then entered the fray as a blood substitute for Moore, before McCusker inspired a late surge from the Scarlets side – the net result of which was a third successful penalty of the night from Shingler.

But Leinster made a cracking start to the second period with number 8 Murphy muscling his way over for an immediate try, and Gopperth's well-struck conversion took the province ahead for the first time.

The New Zealander punished further Scarlets indiscipline with a 47th minute penalty, but Leinster suffered their second yellow soon after as Hudson was binned for taking Liam Williams out in the air.

Leinster showed impressive composure as the home crowd increased the decibel level, Ruddock, Fanning and try scorer Murphy all charging into tackles as they sought to claw back territory.

The presence of new signing Mike McCarthy also bolstered the Leinster pack, however Eoin Reddan's crooked scrum feed allowed Shingler to cut the deficit back to a single point.

Scott Williams showed his fast-breaking ability on the hour mark as Simon Easterby's men pressed once more. After Hudson's return, Leinster gained ground and Gopperth's reliable right boot made it 23-19.

They then struck the decisive blow of the match as a brilliant blindside break involving replacement Isaac Boss, Cronin and Murphy put prop McGrath thundering into space out wide and his pass out of the tackle released fellow St. Mary's College clubman Hudson for the left corner.

Gopperth nailed the very difficult conversion with a booming strike and although the Scarlets threatened to reply – a promising position was ruined by obstruction from McCusker – Leinster soon made the game safe.

Hudson ran intelligently from deep and Gopperth clinically exposed some space on the left again, running strongly and taking a return pass from Devin Toner before stepping inside Rhodri Williams to score a classy five-pointer.

Replacement Noel Reid was brought down in front of the posts as he threatened to add a further try, with Leinster now dominating both possession and territory.

An off-the-ball scuffle involving Scarlets full-back Gareth Owen and McGrath saw the pair sin-binned in the 78th minute, Leinster were not finished though and Macken did well to collect Gopperth's long pass and release Kearney for a final converted effort on the right. 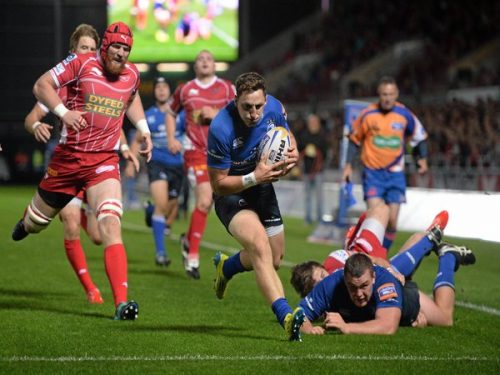