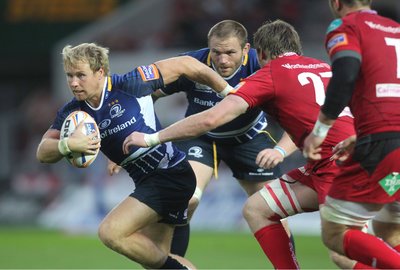 Scott Williams’ 14th-minute try set the hosts on their way to a bonus point victory in Simon Easterby’s first competitive match in charge.

Ian Madigan, who finished with 15 points, and Devin Toner both touched down in the second half, but with their Welsh internationals coming to the fore the Scarlets were in no mood to be caught.

The Welsh region were guilty of a couple of early ruck infringements and after the second one, Madigan landed a smartly-taken penalty from the right.

Leinster had to absorb pressure in defence as the hosts came into the game, their captain Rob McCusker going close on a drive before centre Williams was put over to the right of the posts.

Aled Thomas converted and as the Llanelli outfit continued to press, it took a strong tackle from Leinster’s stand-in skipper Shane Jennings to prevent Tavis Knoyle from scoring.

Leinster were forced onto the back foot again and some neat passing sent full-back Liam Williams crashing over past Fionn Carr and Brendan Macken for the Scarlets’ second try.

Thomas was able to add the extras, putting Easterby’s charges 14-3 in front just short of the half hour mark.

Leinster knuckled down with a couple of strong scrums to get into scoring range and after McCusker was singled out as the offender at a midfield ruck, Madigan took the opportunity to convert his second penalty.

The visitors continued to probe with short kicks from Isa Nacewa and Andrew Conway, however the Scarlets covered the danger and took an eight-point lead into the break.

Isaac Boss, Carr and Dominic Ryan typified the high work-rate maintained by Leinster, but the Scarlets’ speedy and powerful attack was too hot to handle at times.

Barely two minutes into the second half, George North started a rampaging surge that ended with him touching down in the right corner for an unconverted effort.

Lively replacement John Cooney helped Leinster get back to the Scarlets 22, only for the home side to launch a tremendous counter attack that earned them their bonus point score.

Liam Williams did the initial damage, then flanker Aaron Shingler showed great pace on the burst and a final pass from Knoyle released Andy Fenby for the left corner.

Joe Schmidt freshened up the Leinster line-up with a series of substitutions, and that boost of energy helped yield a much-needed try.

Toner lunged in under the posts in the 62nd minute after taking a well-timed pass from Jennings off the back of a ruck. Madigan converted to bring the margin down to 13 points.

Two minutes later though, the Scarlets replied with their fifth of the evening as replacement Kieran Murphy got over despite a last-ditch challenge from Leo Auva’a.

The Welshmen were not finished yet and as Leinster were left to rue costly turnovers and missed tackles, North and Fenby completed their braces.

Leinster had the final say, grabbing a consolation try in injury-time as Madigan sold a neat dummy to scoot over for a well-taken effort which he converted himself.