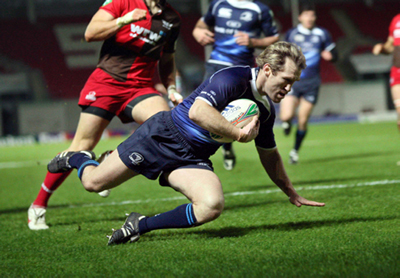 Speaking after the match, Heineken Man of the Match Sean O’Brien said: “We had opportunities in the first half and we let them slip and maybe our concentration wasn’t as good as it should have been.

We had to work very hard for the fourth try and we’re happy with the performance in the first half, especially, but we needed to kick on and we didn’t do that.

“We’re looking forward to next week. Nowadays you know you have to have your line speed right and that approach never changes from week to week. They ran hard at us, but we defended well for long periods of the game and came out on the right side thankfully.”

Tries from Shane Horgan, Gordon D’Arcy, Shaun Berne – who also kicked 12 points in a superb all-round performance – and a late effort from Heineken Man of the Match O’Brien capped a fine evening for the reigning champions in Llanelli.

Leinster got off to a dream start when some good initial work from Isa Nacewa led to a ruck and Eoin Reddan fed Berne who released Horgan and the Boyne man sprinted clear past three desperate challenges to touch down for the opening score of the evening.

Berne added the points and the visitors took a 7-0 lead. The try was just reward for Leinster’s early dominance which was based on some aggressive forward play.

Stephen Jones and Jonathan Davies offered glimpses of an attacking threat for the Scarlets but on different occasions they met concrete walls in the shape of Leo Cullen and D’Arcy.

The tempo of the game increased first through CJ van der Linde and then O’Brien who made powerful bursts. One such forward move through Kevin McLaughlin and then Nathan Hines led to a penalty for the visitors in the 17th minute which the excellent Berne had little trouble slotting home.

D’Arcy scored Leinster’s second try in the 24th minute when he gathered a clinical Nacewa pass in a move started by centurion Jamie Heaslip and continued by Brian O’Driscoll. Nacewa’s pass was inch perfect for the onrushing Wexford man and again Berne slotted the conversion to extend Leinster’s advantage to 17-0.

A wonderful Nacewa break three minutes later almost reaped a third try for Leinster but they didn’t have long to wait when Reddan took a quick lineout to van der Linde and Nacewa passed to Heaslip who made valuable yards before releasing a precision pass to Rob Kearney. Kearney then found Berne and the Australian sealed the deal in the corner, though his conversion sailed marginally wide.

Leinster held on to a deserved 22-0 lead at the interval.

The Scarlets began the second half strongly and it was the Jones/Davies midfield partnership which reaped their first points when Davies crashed over from close range.

Jones added the points to reduce the deficit to 15 points. With Leinster down to 14 men when Hines was adjudged to have been offside in a ruck, the Scarlets threatened but Leinster maintained their composure. A 50 metre strike in the 50th minute from Kearney had the distance but narrowly lacked the direction as Leinster regrouped.

Five minutes later Sean Lamont shoulder charged Nacewa and he too was yellow carded and from the resulting penalty Berne extended Leinster’s lead to 15 points.

Leinster pushed hard for the four-try bonus and were finally rewarded when Sean O’Brien touched down when he capitalised on a Berne break down the blindside and a Heaslip offload. Berne completed an excellent evening with a wonderful touchline conversion to extend the scoreline to 32-7.

Paul O’Donohoe came on for his first Heineken Cup appearance as Leinster unloaded the bench and the visitors attacked until the end.