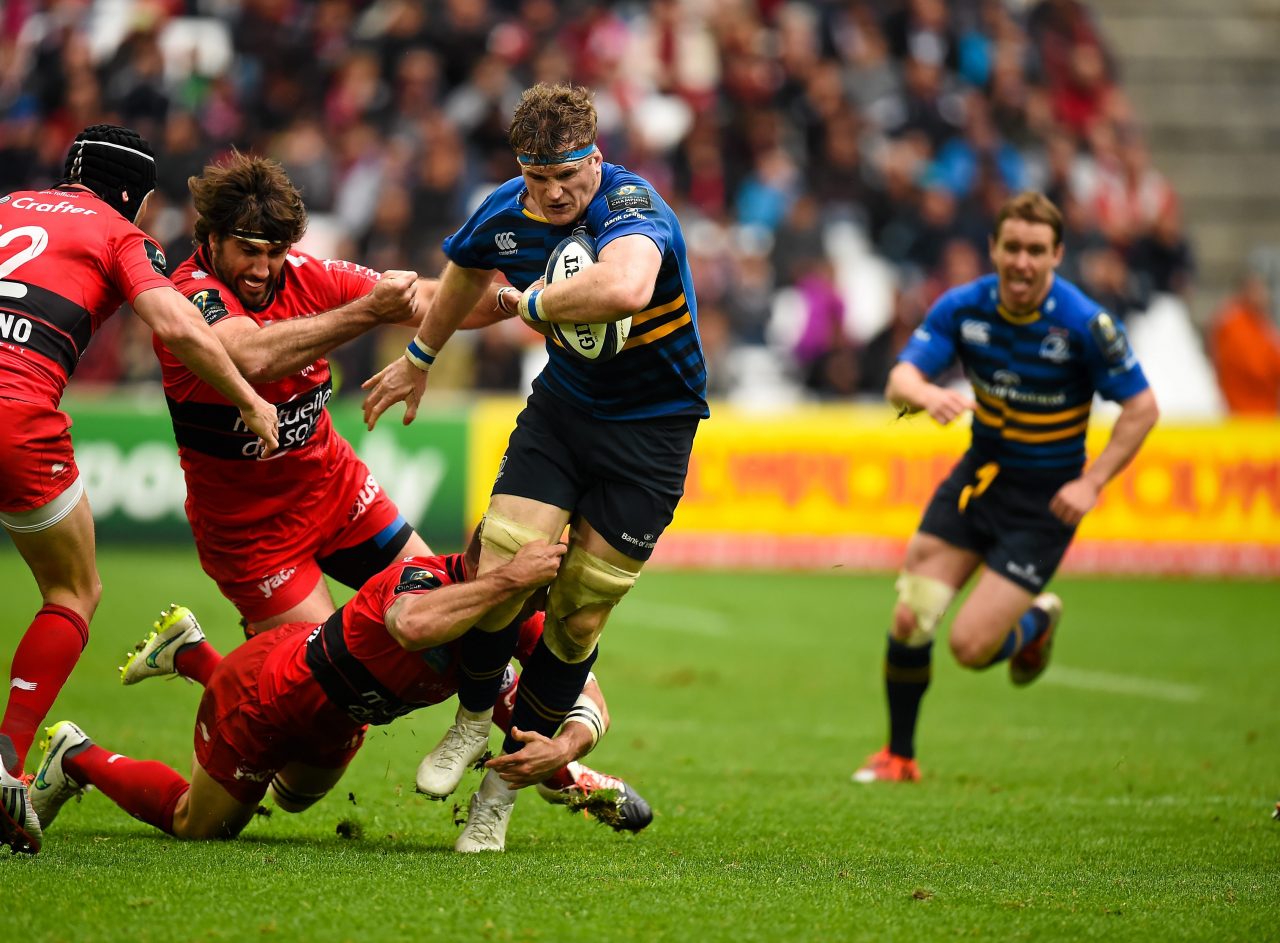 Raising their game significantly from recent outings, Leinster led at half-time and finished the scoring at the Stade Vélodrome as they tested the French giants throughout a tense 100 minutes of rugby.

Three Ian Madigan penalties had them leading 9-6 at the break, and the centre held his nerve to land a long-range levelling kick in the 69th minute and send the semi-final to extra-time.

Locked level at 12 points apiece, something had to give in the two added periods of 10 minutes each way. After man-of-the-match Leigh Halfpenny and Madigan swapped further penalties, it was Toulon who gained the upper hand despite losing lock Ali Williams to the sin-bin.

Halfpenny followed up with his sixth successful penalty and then converted Bryan Habana's 90th-minute try which saw him run in from halfway after intercepting a Madigan pass.

Jamie Heaslip and his Leinster team-mates battled on and a deserved Sean O'Brien try from a close-in maul, which was unconverted, cut the gap to 25-20 in the dying minutes. However, time ran out on the province's comeback bid as Toulon advanced to their third successive European Cup final.

Praising the efforts of his squad afterwards, Leinster head coach Matt O'Connor said: ‘It was a pretty impressive performance from my guys. They gave every bit of effort they had and we led for large parts of the game. They are gutted in the dressing room.

‘The conditions made it difficult to play out there and the defences dominated. It was hard to put passes together and get the ball to the edges.

‘We dug in for large parts of the game, but the interception try changed the game. We wanted to drive at them, make their forwards work really hard and break them down in the last 15 minutes.

‘Unfortunately, we weren't good enough to do that, but the effort that those 23 players put in shows how much it means to them to play for Leinster. We may have lost, but this performance has shown we can compete against the best club side ever put together.’

Halfpenny booted Toulon into an eighth minute lead in wet conditions, however Leinster avoided the concession of a try as Chris Masoe was ruled offside from a Frederic Michalak up and under.

O'Connor's side put a nervy start behind them with Madigan's 11th-minute leveller, awarded after a cynical offside from Bakkies Botha, and some excellent aerial work by Devin Toner and Rob Kearney.

Toulon's indiscipline – this time Botha was pinged for pulling down Jordi Murphy at a lineout – gave Madigan his third shot at the posts and he made no mistake from a difficult left-sided position.

The slippery ball caused problems for both sides, with some loose kicking out of hand from Jimmy Gopperth and Madigan also lifting the pressure off the Toulon back-three.

The defending champions gained some momentum from a good scrum, winning turnover ball in the Leinster half and with Cian Healy whistled up for side-entry at a ruck, Halfpenny duly closed the gap to three points on the half hour mark.

Nonetheless, the set piece continued to be an area of strength for O'Connor's men approaching half-time, as Mike Ross got back on top against Xavier Chiocci in the scrum and the heavily-involved Murphy stole an important lineout late on.

After an early Halfpenny penalty miss on the resumption, Matt Giteau had a clearance kick charged down by Gopperth but the Kiwi's hack through skewed away to the left of the posts and Halfpenny was there to cover the danger.

Toulon were winning more territory as the second half progressed, with replacement Steffon Armitage evening up the breakdown battle. A scrum penalty on the 10-metre line saw Halfpenny make it 9-all.

The attritional nature of the game, which saw Fergus McFadden sustain a suspected broken arm, meant that both benches were fully utilised. Martin Moore made the required impact for Leinster, getting back in defence to win a relieving ruck penalty after Mathieu Bastareaud had built up a head of steam.

A brilliant touchfinder from Gopperth got Leinster back into scoring range, but Madigan hit the near post with a subsequent left-sided penalty and Healy had to come to the rescue at the other end after Madigan had a kick blocked.

Halfpenny then stepped up to punish a Murphy ruck offence, moving Toulon back in front with a central kick, before an excellent long range strike from Madigan squared things up. The three points come on the back of a half-break from Ben Te'o and another forceful carry from O'Brien.

Jack McGrath, Richardt Strauss and Moore worked hard to win turnover ball at a scrum and then gain a penalty in the set piece shortly afterwards. Further hard work from the pack set up a drop goal opportunity for Gopperth which he narrowly missed.

From the resulting dropout, Rob Kearney was just short with a drop goal attempt from distance as the sides scrapped desperately for scoring chances. A monster penalty effort from Delon Armitage was also off-target in the last kick of normal time.

Defences were on top initially in the first period of extra-time. Halfpenny and Madigan traded penalties, the first for a Toulon scrum penalty and Leinster's response came after Jocelino Suta's neck-high challenge on Strauss.

Referee Wayne Barnes brandished his yellow card straight from the restart as he adjudged Toulon lock Ali Williams to have taken Devin Toner out in the air. However, the French giants did well during the sin-bin period, reestablishing a three-point buffer thanks to another well-struck Halfpenny kick.

It got even better for Bernard Laporte's outfit when Habana pounced for the game's first try. As Leinster looked to attack down the right wing, the Springbok winger swooped in to gather Madigan's long pass and he had a 50-metre run to the whitewash. Halfpenny's conversion suddenly widened the margin to 10 points.

It was a deflating blow, but Leinster still started the second period of extra-time with a man advantage. Toner, McGrath and Moore all made hard yards and with Luke Fitzgerald increasing his threat out wide, a penalty gave them an inviting five-metre lineout opportunity.

The lineout possession was secured and a powerful maul saw O'Brien driven over for a well-executed try with six minutes left on the clock. Gopperth took the conversion but his kick came back off the left hand upright. Gordon D'Arcy, in his 17th season of European rugby, had come on for Madigan and with the Leinster bench emptied, they went in search of a match-winning try.

But, despite Giteau kicking out on the full and the bizarre sight of a cat briefly running around the pitch, Toulon held firm to set up an all-French decider against Clermont Auvergne in London on May 2. 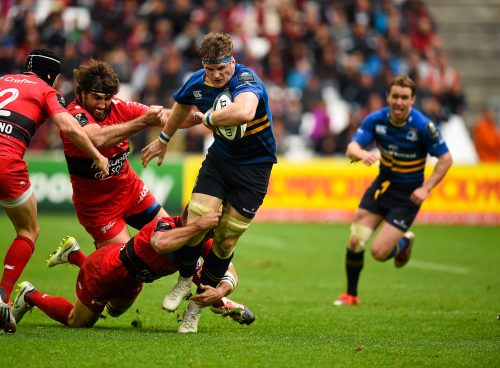