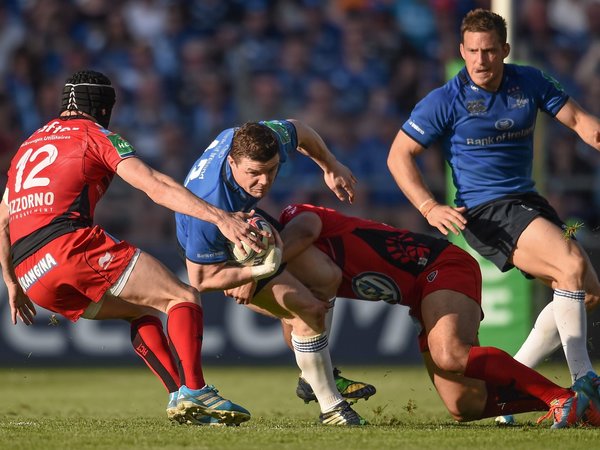 Matt O'Connor's men were very much in contention at the break, as two Jimmy Gopperth penalties after 19 and 28 minutes cancelled out earlier efforts from Jonny Wilkinson for a 6-6 scoreline.

Toulon held the early initiative in this titanic last-eight clash, with Shane Jennings and Eoin Reddan bringing down the advancing Juan Smith close to the Leinster try-line.

Wilkinson hammered over the opening penalty soon after, but the visitors drew confidence from the scrum where Cian Healy put former All Black Carl Hayman under pressure.

Wilkinson's half-back partner Sebastien Tillous-Borde then sprung through a gap and Rob Kearney crucially stepped in to intercept a pass as Toulon failed to finish off an overlap.

Leinster managed to claw back some territory with good covering from Fergus McFadden, who went off injured by the end of the first quarter, and some clever kicking from Brian O'Driscoll.

Prop Healy was also relishing the physical stakes, clattering into tackles and having one notable run as Leinster made it up into the hosts' 22.

Dave Kearney got up well to challenge Delon Armitage for a high ball but Jennings was penalised at the ensuing ruck and Wilkinson's successful kick made it 6-0.

Leinster snapped back those three points when Mike Ross forced Xavier Chiocci to pop up in a scrum and Gopperth nailed the kick to get the province off the mark.

Healy appeared in attack again as he kicked through and then blocked Wilkinson's attempted clearance into touch. Moments later, Toulon's talismanic out-half and captain had to go off with a match-ending leg injury.

With their scrum continuing to perform well, Leinster were level after Gopperth punished a Jocelino Suta infringement from a crisply-hit penalty on the right.

Giteau was unable to reply off the kicking tee and Rob Kearney countered superbly from a long kick, however his pass to the supporting Gordon D'Arcy did not go to hand, adding to the province's error count.

Their determined efforts meant that they were 40 minutes away from becoming the first team to win a Heineken Cup fixture at Toulon's home fortress.

However, the powerful French side took the game by the scruff of the neck early in the second half, with Giteau kicking a penalty and converting prop Chiocci's close range try.

Chiocci won the ruck decision for the 42nd minute penalty and after an initial surge from his front row colleague Craig Burden and sustained pressure in the 22, the loosehead crashed over the Leinster whitewash.

Toulon had the momentum now at 16-6 and winger Drew Mitchell made good yardage on the right as Leinster, who craved line-breaks of their own, worked hard to stay in the game.

Gopperth missed a long range penalty to the left before splitting the posts from a shorter distance in the 54th minute penalty after Healy carried strongly into contact.

Although fresh legs made an impact up front, Leinster were left to rue earlier missed opportunities and a general lack of precision as Toulon pulled further in front.

The concession of a second try came after Leinster had built a promising platform at the other end, McFadden's replacement Zane Kirchner charging up to the 22 on the back of a well-executed maul.

Toulon forced a turnover and then outstanding numer 8 Steffon Armitage hacked downfield after a Leinster lineout had gone loose.

The hosts retained possession in the 22 and a big Bastareaud carry sucked in defenders before Mitchell took advantage of a couple of missed tackles to nip in behind the posts in the 61st minute.

The winger's Australian compatriot Giteau added the extras, with the leaking of those seven points being a real hammer blow to O'Connor's charges.

Steffon Armitage won the man-of-the-match award for his influence at the breakdown, and his brother Delon stepped forward from full-back to nail a long range penalty with 14 minutes left.

Now 26-9, down, Leinster kept pressing and were finally rewarded in the 69th minute when a Leo Cullen-won lineout led to fellow replacement Jordi Murphy being mauled over in the left corner.

Ian Madigan missed the difficult conversion to the left and although Florian Fresia was sin-binned, Toulon had the final say with a late penalty from Giteau who pulled the strings in Wilkinson's absence.

Speaking afterwards, Leinster head coach Matt O'Connor said: "In the first 15 minutes Toulon had a lot of momentum and we did quite well to stay in it, and to go to the half at 6-6.

"But their ten points after half-time won them the game really. We'll be ruing that 20 minutes for a long time.

"We didn't look after the ball. There were three of four genuine scoring chances in unstructured positions in that first half that we didn't take.

"A lot of teams have come here and lost. It's a tough place to win. Unfortunately, we didn't show the best version of ourselves today."

After the final European appearances of retiring duo O'Driscoll and Cullen, Leinster's focus quickly switches back to the RaboDirect PRO12 and next Friday's trip to the Ospreys. 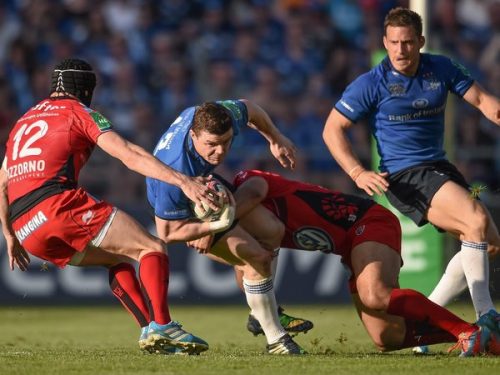