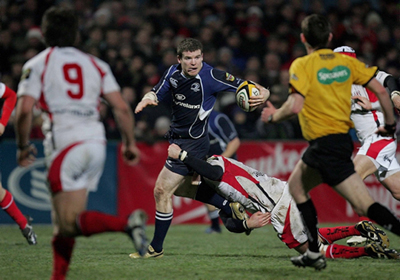 Speaking after the game, Leinster Coach Michael Cheika said: “I was pleased with the match over the whole 80 minutes. We made one mistake, but bar that we managed the game ok. We probably could have got a bit more pace on to the ball at times and we were a bit static when we received the ball, but we tried doing a few things different and it was a step in that direction.

“Ravenhill is a very difficult place to come and play and Ulster are an improved side. We have copped a lot of flak and I’m sure we’ll cop some more again. Maybe next week? Who knows? That seems to be the way everyone wants it to work. We knew that tonight was always going to be a tough match for us and there was that extra bit of pressure.

“But we kept our composure ok, (we) know we could have done a few things better, but we’re happy to get the win up here.”

Felipe Contepomi kicked the visitors into an early 3-0 lead with a penalty before Darren Cave scythed through the Leinster rearguard to touch down, with Ian Humphreys adding the points after 25 minutes.

Ulster held on to a 7-3 half-time lead, before Leinster struck back through Man of the Match Rocky Elsom. The Australian capitalised on an excellent Girvan Dempsey burst in a move involving Sean O’Brien to touch down in the corner, which Contepomi converted.

Dempsey was forced off the field with an ankle knock and was replaced by Simon Keogh who continued his fine run of recent form with another busy display. Humphreys kicked penalties on 52 and 66 minutes, before Keogh snuck in the corner after some clever play from D’Arcy and Contepomi in the 70th minute.

Another replacement, Stephen Keogh, fought hard at the breakdown and earned his side a penalty five minutes later, which Contepomi slotted home, to stretch the advantage to eight points.