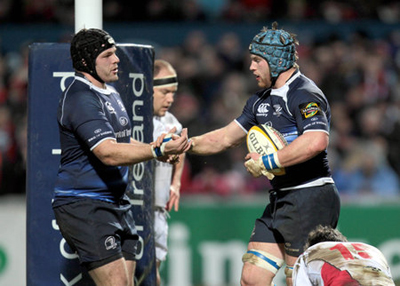 Speaking after the game Magners Man of the Match Isaac Boss said: “I was looking forward to coming back to Ravenhill and I’m delighted with the win because Ulster are a very good side. They have been going very well recently with lots of good young talent so it was always going to be a tough test.

“It was all about putting in a good performance and I thought that our forwards led the way in that regard. It was a pleasing win and we’ll look to improve once more against a good Connacht side this weekend.”

An Isa Nacewa penalty fell wide of the posts in the third minute as Leinster opened the game the brighter of the two provinces and four minutes later Sean O’Brien sliced through a gaping hole in the Ulster rearguard to touch down under the posts and make it 5-0 to the visitors.

Nacewa’s conversion sailed over the bar and from the restart Leinster’s attacking threats were prominent through a wonderful Isaac Boss break, ably supported by Fergus McFadden and the onrushing Dave Kearney. Though that passage of play failed to reap anything tangible, Leinster’s intentions were clear.

And in the 15th minute the Boss-O’Brien partnership linked up again for the Tullow back-row forward to race through to score under the posts, with Nacewa again adding the points.

Ulster rallied and a penalty inside the Leinster 22 from their out-half Niall O’Connor reduced the deficit to 14-3 after 23 minutes.

With Shaun Berne and McFadden asking questions, a spell of pressure led to Nacewa’s third successful kick of the night with a penalty to re-establish the 14-point gap five minutes later.

O’Connor kicked his second successful penalty on the half hour mark as the hosts chipped away at Leinster’s lead. A Devin Toner steal at a lineout almost reaped Leinster’s third try of the evening after initial good work by Dave Kearney as the Blues upped the ante and some excellent scrum play by the front row, spear-headed by the effective prop duo Heinke van der Merwe and Mike Ross, led to a penalty.

Nacewa again calmly slotted home the strike to make it 20-6 in Leinster’s favour at the half time interval.

Leinster picked up where they left off in the second half with the influential Leo Cullen and Dominic Ryan probing, buoyed by a vocal travelling support in the packed out Ravenhill.

Nacewa’s 52nd minute penalty made it 23-6 and five minutes later Shane Horgan gathered a Nacewa pass, after good initial work from Berne and Brian O’Driscoll, to touch down in the corner and the full-back’s superb touchline conversion extended the lead to 24 points.

But Ulster rallied once more and some fine work from Adam D’Arcy found Craig Gilroy who scored in the corner. O’Connor added the points to make it 30-13 to Leinster a lead the province maintained to seal a deserved win.