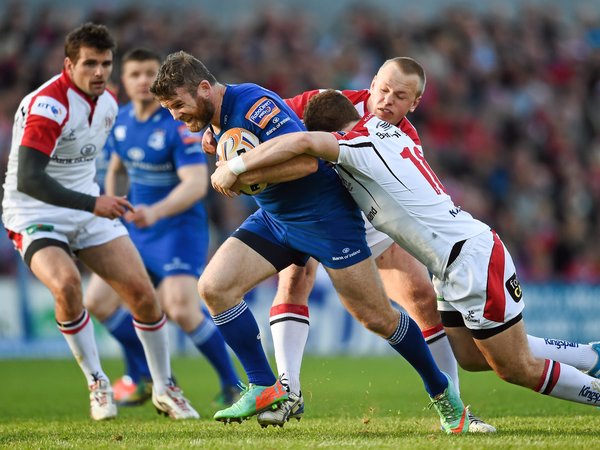 Shane Jennings' 59th-minute try put Leinster eight points clear of an Ulster team that had to play on without prop Tom Court after he was dismissed on the quarter hour mark.

The first half was full of talking points as Court saw red for a tip tackle on Devin Toner and the visitors lost Rob Kearney and Rhys Ruddock to the sin-bin in quick succession.

Matt O'Connor's men led 9-8 at the break thanks to three Ian Madigan penalties, although it was not until Jennings' score that there was breathing space between the sides.

Even still, 14-man Ulster battled back in the final quarter with man-of-the-match Paddy Jackson, who scored all of their points, knocking over three late penalties with Leinster only responding once through replacement Jimmy Gopperth.

It left head coach O'Connor 'disappointed with the performance, but happy with the result' as the Blues – if the sides stay where they are after next week's final round – are set to host the Ulstermen in the play-offs at the RDS.

There was an electric atmosphere for the official opening of the redeveloped Ravenhill, as the provinces renewed rivalries 90 years on from playing the first match at the old stadium.

Bruising challenges were the order of the day as Cian Healy clattered into Roger Wilson as he made an early carry and Paul Marshall muscled in on Dave Kearney to force a turnover.

Leinster took advantage in the resulting scrum as Healy got the better of Andrew Warwick, playing in Ulster's injury-hit tighthead position, and Madigan fired over the sixth minute penalty from the right.

He added a second three-pointer from the opposite side of the pitch, 12 minutes in, and Chris Henry was fortunate that the Leinster number 10 missed an opportunity to punish his ruck infringement soon after.

Ulster were down to 14 men when Court's reckless challenge on Toner near the Leinster 10-metre line led to referee Luke Pearce drawing a red card from his pocket.

But the Ulstermen held up the visitors twice during a sustained period of pressure in their 22 and then struck at the other end for the game's opening try.

Jackson blocked an attempted chip from Madigan and dashed away from Isaac Boss up the left touchline to brilliantly touch down in the corner despite a neck-high challenge from Rob Kearney.

TMO Dermot Moloney confirmed the grounding and after Kearney was sin-binned, Jackson's conversion attempt slid wide of the posts.

Ruddock joined Kearney in the Leinster dugout three minutes later as he was carded for making contact with Jackson in the air.

The ferocity of this interprovincial encounter continued right up to half-time, with Jackson and Madigan trading penalties as Leinster held onto their one-point advantage.

Ulster remained just a single point in arrears as Madigan missed two long range penalties on the resumption, and the hosts produced a defiant spell of defending – typified by captain Johann Muller's tenacious tackling near his try-line.

There was a clear opening for Leinster on the left, but Dave Kearney lost his footing as he stooped to Gordon D'Arcy's low pass, with the winger duly bundled into touch near the corner flag.

Madigan made no mistake with a 54th minute penalty after a maul infringement by Ulster, just reward for the visitors' strong start to the second period.

Jackson helped Ulster claw back some vital territory and the young Ireland international nailed a penalty to keep his side in touch at 12-11.

However, industrious flanker Jennings scored his try straight from the restart as a leaping Tommy Bowe fumbled Madigan's well-delivered kick.

Boss released Brian O'Driscoll on the right, with the centre's superb offload out of a tackle sending Jennings raiding into the Ulster 22 and he strided towards the whitewash after throwing a clever dummy.

Madigan added the extras for a 19-11 scoreline, but back came Ulster once again with a tremendous midfield run from Darren Cave seeing him make an impact off the bench.

Back within scoring range, Jackson fired over from the kicking tee to briefly make it a five-point game before Gopperth rewarded a strong scrum from the reinforced Leinster pack with a 70th minute penalty.

That proved to be the clinching score for O'Connor's charges who finished the match in control of possession, although Jackson kicked two more penalties for a losing bonus point which puts Ulster through to the play-offs. 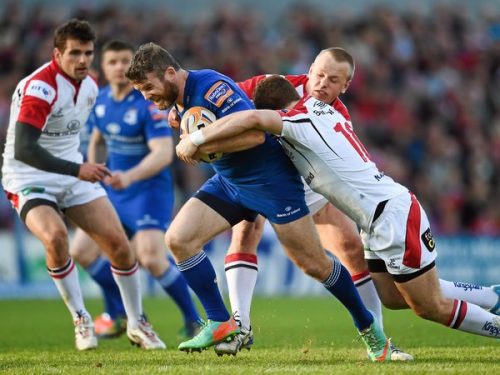