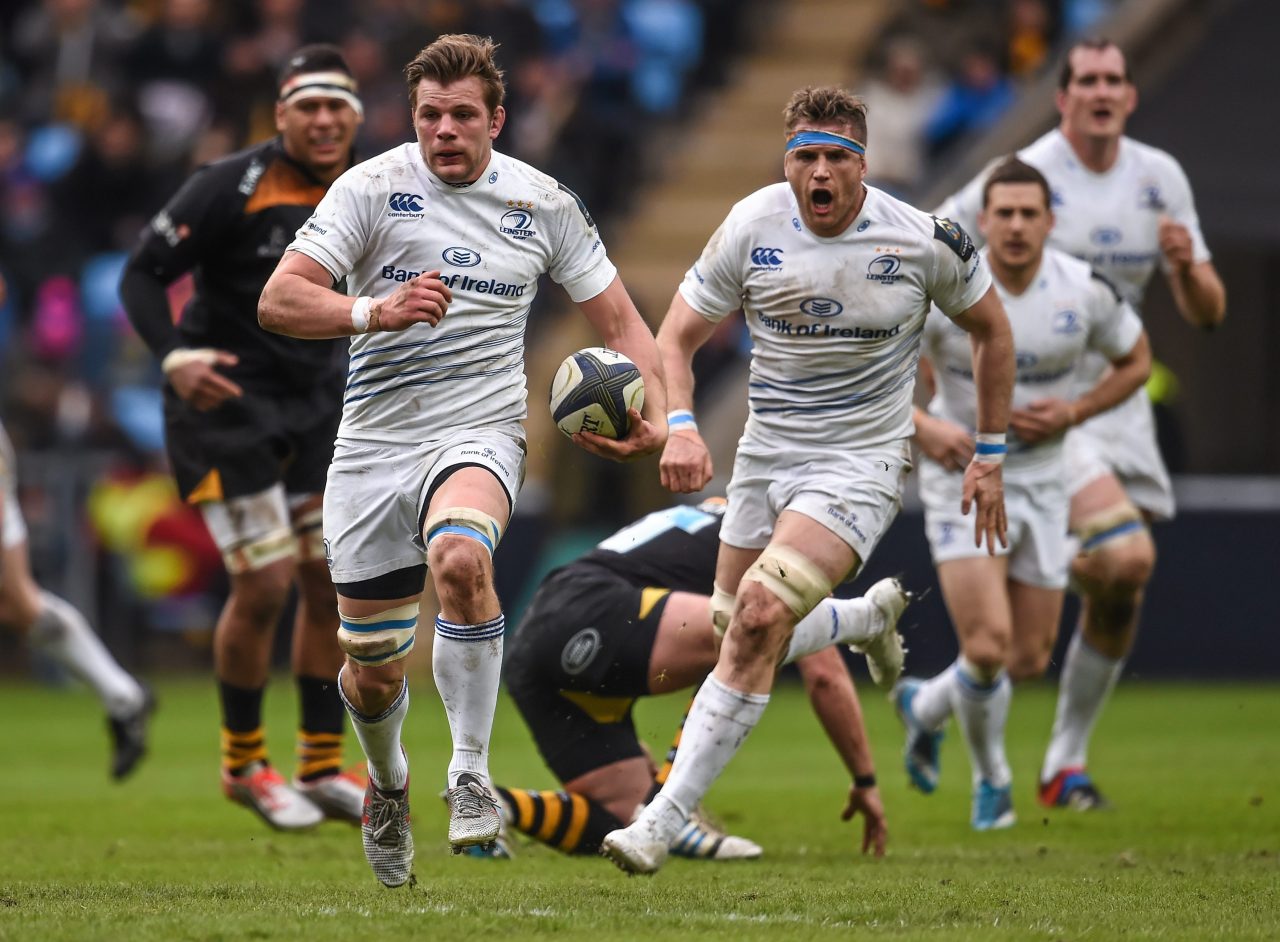 Leinster qualified for the European Champions Cup quarter-finals as Pool 2 winners, but they had to survive a nail-biting finish against Wasps at the Ricoh Arena…Luke Fitzgerald post-match reaction…

Andy Goode missed a last-gasp drop goal attempt as Leinster held on to secure a draw and two crucial pool points which, at the end of six pulsating rounds, is the difference between them and English challengers Wasps and Harlequins – 20 versus 18.

Matt O'Connor's men had been on course for a third successive European victory when leading 20-6 at half-time, their tries from Fergus McFadden and Isaac Boss being scored while Ashley Johnson (1 minute) and Lorenzo Cittadini (28) were in the sin-bin.

However, Ian Madigan had a rare off day with the boot – missing four penalty efforts – and Wasps bounced back impressively in the second period as they gradually ate into Leinster's lead.

The hosts created two try-scoring opportunities from close-in lineout mauls, taking both through Matt Mullan and a diving Nathan Hughes, with Goode nailing both conversions – the second levelling one in the 70th minute was retaken after an early Leinster rush.

The province were unable to break up their scoreless run as Jimmy Gopperth sent a subsequent drop goal shot wide and Madigan missed a 47-metre penalty in the dying minutes.

In a very tense finish, Wasps hammered up towards the Leinster 22 to set up Goode for one final scoring opportunity but pressure from the Jack Conan-led chargers saw the experienced out-half skew his kick to the right and wide.

The hard-fought draw means Leinster are through to the last-eight but their hopes of a home quarter-final rest on how the other pools pan out over the weekend.

Speaking afterwards, man-of-the-match Luke Fitzgerald said: ‘It is disappointing to get a draw. It's just poor to do what we did, with the lead we had in the first half. This is a tough place to come but we let things slip and let them back in the game.

‘It's just disappointing after we made a confident start. It feels like a defeat and we talked all week about the need to get the win and the home draw in the quarter-finals.

‘Wasps were really poor defensively in the first half and we took advantage of that but couldn't maintain it to guarantee a home draw in the knockout stages.

‘But we have a couple of big names coming back (into the team) and we know it's going to be a tough draw in the quarter-finals.’

Wasps were reduced to 14 men inside the opening seconds as Johnson’s ill-timed challenge on airborne kick receiver Dave Kearney earned him a yellow card.

Gopperth plunged the hosts back towards their try-line with a fine touch-finding kick and captain Jamie Heaslip, with a leg-pumping carry and quick pass, created numbers out wide for Rob Kearney to put McFadden over at the right corner.

Madigan clipped over a superb conversion from the touchline, however a penalty for offside allowed Goode to answer back in the sixth minute.

Darragh Fanning had come on the injured Kearney on the left wing, and before Johnson’s return Madigan pushed a 49-metre penalty wide following a dominant Leinster scrum. The centre also curled a second effort to the left of the target just minutes later.

Kane Douglas came through the middle of a maul to force an excellent turnover, launching dominant Leinster downfield again as Rob Kearney and Madigan made promising yardage before Wasps scrambled well to keep them out.

A resulting penalty was popped over by Madigan for a 10-3 scoreline entering the second quarter, and Wasps remained on the back foot as their tackle count rose to 54 made/10 missed by the 24-minute mark.

Leinster were forced into a second back-line change as scrum half Eoin Reddan (knee) made way for Boss, but the visitors continued to dictate play with the very effective Jordi Murphy making a line-break. Full-back Kearney got involved in the attack again and Italian prop Cittadini saw yellow for not rolling away quickly enough.

Gopperth, kicking while Madigan received attention, converted the penalty, only for overworked Wasps to respond soon after thanks to a well-struck second place-kick from Goode.

Leinster responded by pressurising Joe Simpson into an error and from the ensuing scrum, McFadden punched a hole in the hosts’ midfield before further pressure opened up enough space for Boss to reach over from a metre out.

After Madigan added the extras, Wasps enjoyed their best attacking spell as Christian Wade pressed on the right wing. Douglas saw yellow for tackling Johnson without the ball, however Goode missed the resulting penalty with the last kick of the half.

Murphy popped up in attack once more as 14-man Leinster roared back into the 22 on the resumption, an obstruction call denying Michael Bent as he carried up close to the try-line.

Wasps were then pinged for obstruction at the other end as Tom Varndell’s try in the left corner was ruled out for Hughes impeding the covering Luke Fitzgerald, who produced a typically energetic display in defence and attack.

Leinster missed out on another three points when Madigan was wide with a kickable 53rd minute penalty, and the visitors were soon left to rue their failure to squeeze more points out of that one-sided opening half.

With each passing minute, Wasps were coming more and more into the game and their persistence was rewarded just past the hour mark. Goode flung a penalty to touch, setting up a five-metre lineout, and although Leinster halted the initial drive, referee Jerome Garces spotted a successful grounding by prop Mullan just moments later.

An accurate conversion from Goode cut the gap to seven points and Wasps were soon rewarded for the same approach down the left hand side. Dai Young's side gained momentum from another lineout maul and number 8 Hughes dived over the top of a ruck to register try number two.

The retaken conversion was nailed by Goode from wide out on the left and Leinster, who had dropped off in allowing resurgent Wasps to stay in contention, had a real fight on their hands.

Fitzgerald and the fresh legs of Conan, Mike McCarthy and Richardt Strauss were important in Leinster building some welcome pressure in attack. Nonetheless, they emerged pointless from that particular spell of phase-building as Gopperth nudged a drop goal wide.

Madigan then watched a difficult penalty kick fall to the right of the posts as Elliot Daly, who was whistled up for side-entry, breathed a big sigh of relief.

With Conan tackled into touch, Wasps used set piece ball to make the hard yards through a series of carries as they hunted for a late match-winning score. It never came, though, as Leinster held their discipline and Goode's missed kick was the final act of a gripping Anglo-Irish clash.

Matt O'Connor confirmed that the injured Dave Kearney 'got a bang on his shoulder'. ‘It's significant and he could be out for several weeks, while Eoin Reddan has a medial strain on his knee,’ he said. 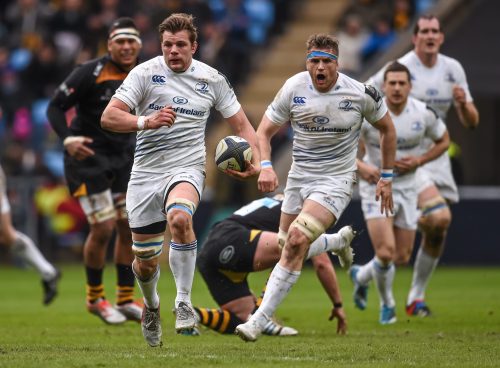