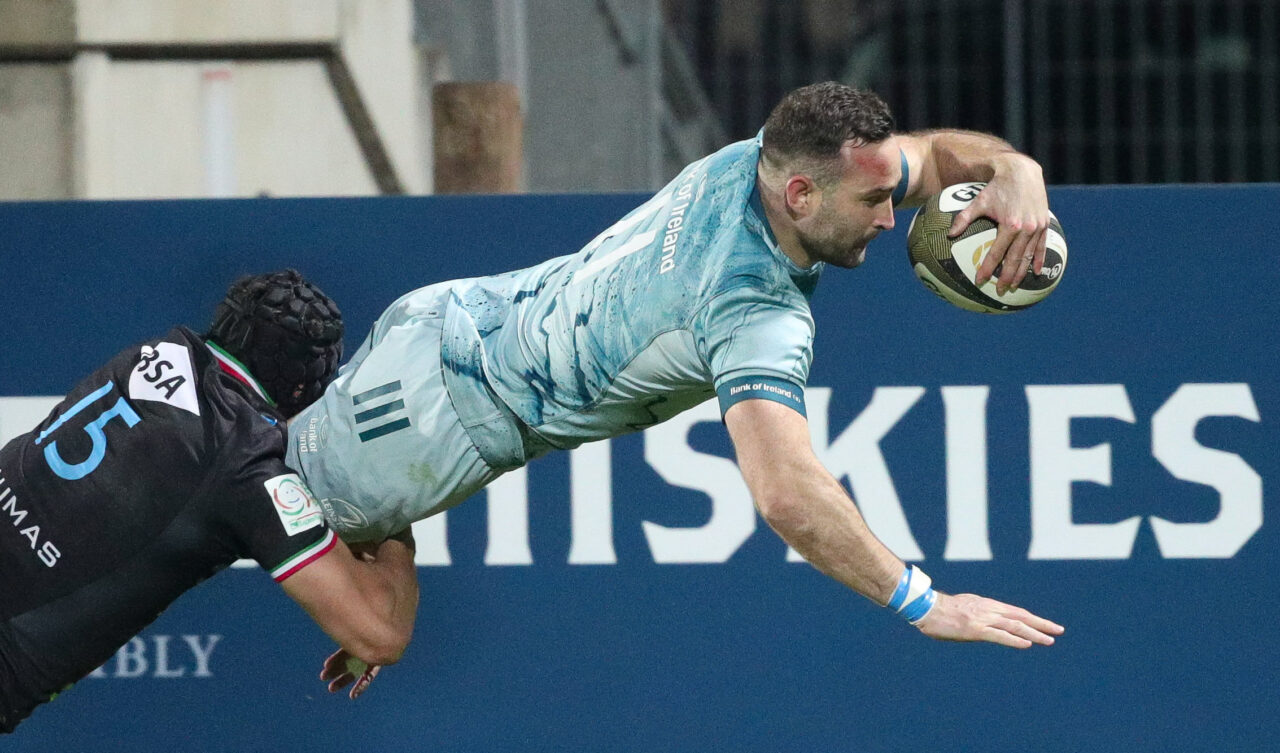 Leinster Rugby secured a seven-try, bonus-point win against Zebre as Dave Kearney picked up a hat-trick in the Guinness PRO14 at Stadio Sergio Lanfranchi on Friday night.

Leo Cullen’s men could have been forgiven for taking their feet off the gas in faraway Italy having secured a final spot last weekend but that is just not their way.

However, they did fall behind to Antonio Rizzi’s penalty for a ruck infringement in the third minute.

The hard-up pressure from the home side and Josh Renton’s angled ball forced good field position.

When Leinster were not as quick as Marius Mitrea wanted to vacate the ruck, out-half Rizzi doubled the advantage.

From this restart, Cian Kelleher made a strong impact in the tackle and Alex Soroka, on his first start, had his first involvement on the ball.

The combination of continuity and momentum from hard driving by the likes of Harry Byrne, Soroka again, Scott Penny and Jack Dunne enabled Dan Sheehan to reach for the line for Byrne to convert in the 10th minute.

A lovely offload off the floor by second-row Dunne allowed Jimmy O’Brien to clear his lines.

The dexterity of Max O’Reilly to collect a dropping ball and evade the first tackler was the basis for out-half Byrne finding a fantastic touch up the right.

It was up to Zebre to work their way out of trouble. The Leinster maul defence was immovable and Kelleher was taken out in the air from Renton’s high ball.

Leinster went for touch and Soroka was quickly away from the back after Sheehan’s lineout to Dunne.

Zebre’s indiscipline handed the opening for Byrne’s first penalty to make it 10-6 in the 14th minute.

A bout of kick-ball was won by the champions, Thomas Clarkson cleverly rescuing a poor execution at the lineout for O’Reilly to use his footwork to make ground.

The ball was swiftly moved right for Rory O’Loughlin to kick in behind and for Jimmy O’Brien to close down the space allowed to Gabriele di Giulio.

It wasn’t long before Soroka spilled the ball in his exuberance and Zebre steamed forward through a sweet punt from wing Giovanni D’Onofrio.

Once again, O’Brien’s left boot was the main exit strategy after another carry by Soroka, making a real impact.

The home side got into their phase game, Renton orchestrating it all before hooker Sheehan dug in for a turnover penalty.

Unfortunately, referee Mitrea’s attention was drawn to an incident in which Soroka was yellow-carded for a high tackle, the outcome of which was another three from Ricci at the end of the first quarter.

The tidy work of Penny and bursts from Sheehan and Luke McGrath had Zebre turning, Josh Murphy making further ground until centre O’Brien entered a ruck from the side.

Again, Penny dealt well with a loose ball, Harry Byrne was a threat and Jack Dunne was twice involved in keeping the defence interested.

Sheehan found Josh Murphy out of touch and Leinster ground through the gears, sucking in the Zebre defenders.

Out-half Byrne pulled the ball back to O’Loughlin and the timing of the pass was perfect for Kelleher to touchdown, Byrne kicking the extras for 17-9 in the 28th minute.

When the Blues defence stood firm, a ball over the top by wing Pierre Bruno was gathered by O’Reilly.

The province could not quite escape their territory and Ricci reduced the difference with a fourth penalty in the 33rd minute.

But, from the restart, half-back McGrath was alert to the opportunity when charging down Ricci’s clearance and dotting down just before the ball went beyond the dead ball line for Byrne to convert from the right.

Zebre looked to benefit from the extra man by tapping from a penalty. A lack of execution was seized on by Kelleher and Penny was there to prolong the counter-attack.

Sheehan was onto the ball in a flash, offloading brilliantly to McGrath. Byrne, O’Loughlin and O’Reilly all had a hand in putting Dave Kearney outside two men for a tremendous try converted by Byrne.

There was just enough time for Sean O’Brien to come on for his debut, albeit temporarily for Penny, in the lead up to half-time.

It didn’t take Leinster long to hit their straps, Scott Penny storming out of the 22, O’Loughlin taking the ball forward for what looked a likely try until the ball bobbled away from Kelleher.

Scrum-half Renton was a threat as a sniper down the right. The Zebre forwards got on top at a scrum for vital go-forward.

When the pick-and-go came to nothing Jamie Elliott flung a wide pass for wing D’Onofrio to go over unopposed, Ricci clipping the conversion in the 48th minute.

Straight away, Leinster were on the front-foot, moving the ball back and forth, Jimmy O’Brien’s pass slapped down by wing Bruno for a yellow-card.

Sheehan connected with Ross Molony at the lineout. The forwards got around in support and Sheehan was the man in the van for a textbook mauling try for 36-19 in the 53rd minute.

It was stunning stuff now. Lock Dunne broke the first line of defence and out-half Byrne fizzed a pass to Kearney on the left-wing. The ball came back right where Sheehan cut an inside angle onto the ball.

The tempo of Hugh O’Sullivan was pulling Zebre out of position, Byrne flicked a wonder ball left and O’Loughlin transferred to Kearney for a flying finish at the corner flag, O’Sullivan adding a top-class conversion for 43-19 in the 56th minute.

At this point, flanker O’Brien entered the fray again and got involved in the next attack as the pace of the game continued to be high.

Tim Corkery also experienced the honour of his first minutes at this level in a proud moment for his family and for Kilkenny RFC.

The quick-thinking of Byrne, from a Penny penalty turnover, exposed space up the left. Replacement Jamie Osbourne stayed calm to send Kearney through for his second try in eight minutes.

Nonetheless, the Italians were not inclined to retreat into their shells. They kept coming in droves, replacement Eduardo Bello bursting clear of a maul, Rizzi converting.

In the last minute, Leinster were unhinged by impressive handling up the left by Zebre and another finish from a twisting maul, Niccolo Taddia bringing down the curtain on the night. 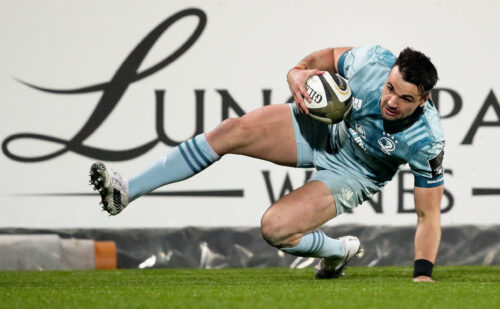 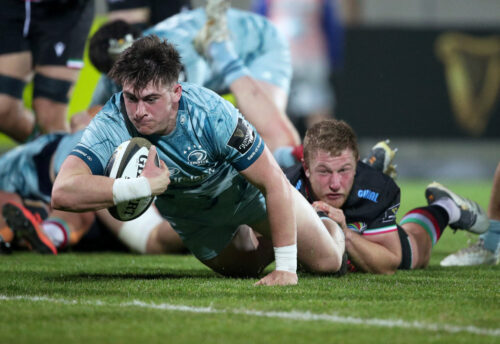 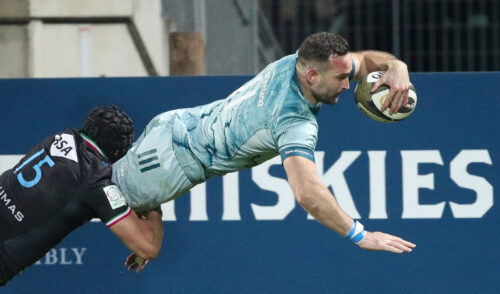 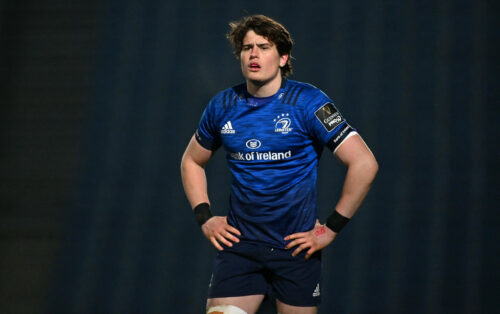 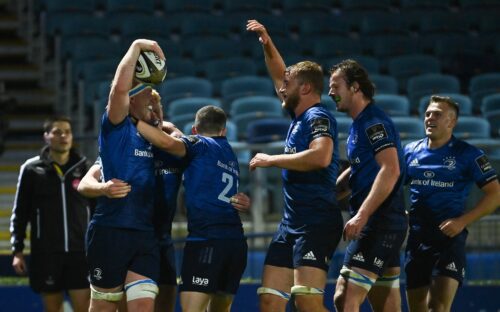 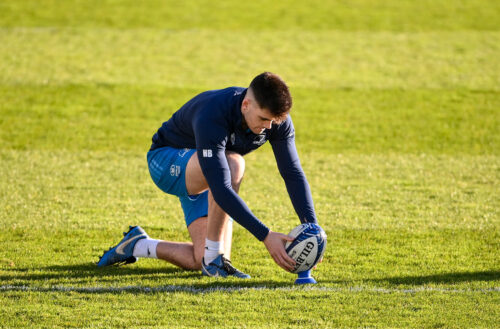