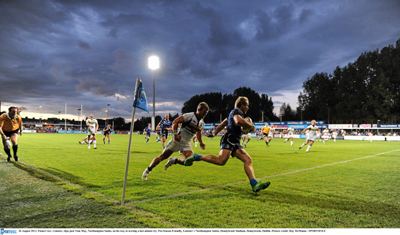 Northampton enjoyed the lion’s share of the territory early on and were rewarded with a penalty from their out-half Stephen Myler after 11 minutes. It was the jolt the hosts needed and from the re-start  Jamie Hagan linked well with Luke Fitzgerald which reaped a penalty.

Ian Madigan’s kick found touch metres from the line but Leinster’s threat was quelled. Almost immediately the Saints roared for the corner after a fine Paul Diggin break and his pass eventually found his opposite wing Noah Cato who was superbly tackled into touch by Andrew Conway.

With debutant Sean Cronin keen to get his hands on the ball and Madigan pulling the strings at out-half Leinster began to assert themselves and a series of pressure inches from the Saints line almost resulted in the first five-pointer of the bright evening.

Myler doubled his side’s advantage in the 25th minute with his second penalty of the evening to make it 6-0. The game ebbed and flowed and Leinster skipper Rhys Ruddock was a towering presence in the loose but it was the Saints who maintained their territorial pressure and Myler slotted home his third successful kick in the 36th minute to give the English side a 9-0 half time lead.

Leinster finished the opening half on a high but despite separate breaks from the likes of Kevin McLaughlin, Dominic Ryan and then Luke Fitzgerald they couldn’t breach the Saints rearguard and they went into the break nine points adrift.

The second half continued in a similar vein and a series of substitutions around the 50 minute mark enabled first seasonal appearances for the likes of David Kearney, but it was the Saints who struck the opening blow of the second half in the 62nd minute when right wing Diggin intercepted a pass to race clear and score into the Bective end of the ground.

Substitute Ryan Lamb added the points to make it 16-0 to the visitors.

It was the spark the hosts needed and a powerful Leo Auva’a burst moments later found Fionn Carr whose scorching run and chip ahead under pressure forced the Saints on to the backfoot.

Eventually Leinster’s persistence told and replacement hooker Jason Harris-Wright, with his first touch of the game, crashed over from a ruck. New Zealander Mat Berquist slotted home the points, with Mat Berquist converting, to reduced the deficit to nine points, 7-16.

Lamb added a late penalty before the industrious Carr sprinted clear of the Saints defence to score a deserved try, which Berquist converted, to give the visitors a five point victory.

BANK OF IRELAND MAN OF THE MATCH: Dominic Ryan (Leinster)