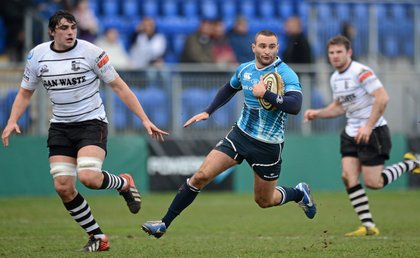 Having lost out to the Welsh League Champions when the sides clashed at Sardis Road back in October, Leinster 'A' were eager to gain revenge in this round 5 encounter.

Thanks to the kicking prowess of Noel Reid, they managed to break the deadlock with just seven minutes of play gone when the Clontarf clubman found the target with a 30-metre penalty.

This was an ideal start to the contest for the hosts, who were well on top in the possession stakes in the early moments. But a resilient Pontypridd, who were accompanied by a vocal travelling support, were quick to cancel this out with a place-kick of their own from out-half Dai Flanagan.

As the game progressed, it was becoming clear just how important accuracy from the boot was going to be, and even though Reid made no mistake with an 11th minute penalty from the left hand side, Flanagan was on target with a difficult effort just seven minutes later.

Reid confidently struck his third penalty of the afternoon 22 minutes in, but despite threatening the Pontypridd line on a number of occasions, Girvan Dempsey’s men were unable to break the visitors’ well-organised defence.

Flanagan was extremely unfortunate to see a further opportunity from a kickable position come back off the post, but they had a narrow escape of their own just past the half hour mark when Andrew Conway miscalculated a pass that almost certainly would have ended in a try for Reid.

The persistence of the Pontypridd pack provided Flanagan with a chance to level matters for a third time on 38 minutes, and he duly obliged from a distance of 35 metres.

However, there was just enough time for Leinster ‘A’ to inflict a hammer blow upon their Celtic counterparts.

Some excellent build-up play by Reid put centre Brendan Macken through for a well-worked try on the left flank. Reid landed the subsequent conversion, giving his team a 16-9 advantage at half-time.

This gave the Blues great confidence upon the resumption, and they managed to maintain their considerable momentum from the end of the first half with a second try.

Macken completed his brace with the first attack of the half following terrific link-up play with his centre partner Jordan Coghlan.

For the first and only time in the game, Reid was wide of the mark with his conversion attempt, but Leinster ‘A’ now had 12 points to spare over Pontypridd – a deficit that the Principality Premiership outfit were always going to have difficulty negotiating.

To their credit, Dale McIntosh’s troops did their utmost to cut into the Leinster ‘A’ lead, and they enjoyed a sustained period of pressure just shy of the hour mark.

Indeed, they looked like they had gotten through for their first try on 56 minutes, but they were held up a couple metres from the Leinster 'A' line.

They continued to press as much as they could, but they simply could not execute the final pass that was required to get through a compact Leinster ‘A’ back-line which was well-marshalled by Macken, Coghlan and David Kearney.

With the likes of James Tracy, Jack O’Connell, Jack Conan and Andrew Boyle being introduced in the closing stages, the Blues had enough energy in the tank to keep their opponents at bay.

In spite of more admirable endeavours from the Welsh side late on, Leinster ‘A’ had more than enough in reserve to record their fourth triumph of the pool stages.