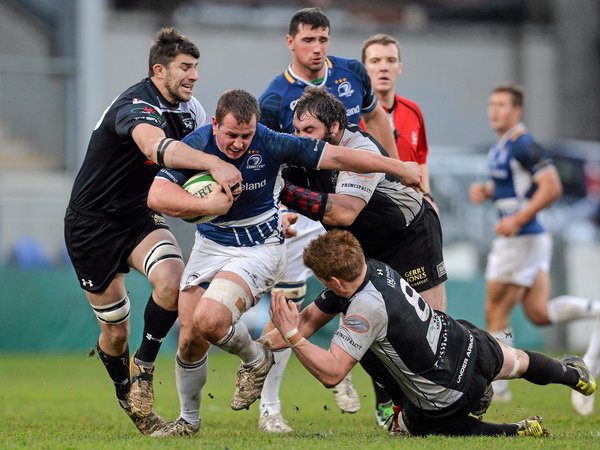 Having secured victories in their opening two Pool 1 encounters, the reigning champions were hoping to maintain their winning form against the Welsh Premier Division outfit at Donnybrook.

They certainly started the contest in bright fashion and with Darragh Fanning and powerful centre Jordan Coghlan probing effectively, it looked like they might be able to break the deadlock soon rather than later.

However, the Cross Keys rearguard were holding firm during the early exchanges, and they were presented with a chance to open the scoring from a long distance penalty ten minutes into the action.

The subsequent kick by out-half Steffan Jones – who also lines out for the Newport Gwent Dragons who use Keys as a feeder club – was well-struck, but much to the relief of the hosts his effort eventually came crashing off the underside of the crossbar and away to safety.

In spite of this missed opportunity, the visitors continued to cause problems for Leinster ‘A’, as their pack were applying enormous pressure towards the opposition's try-line.

Girvan Dempsey’s charges continued to threaten as the first half wore on, though, and they finally opened their account on 16 minutes when hooker Bryan Byrne drove over in the right corner following an enterprising move inside the 22-metre line.

St Mary’s College clubman Cathal Marsh was off target with his conversion attempt on this occasion, but this only proved to be a minor setback for the hosts, as his Templeville Road compatriot Fanning raced through for a further five-pointer on the left wing just moments after the restart.

The flame-haired number 10 was unfortunate to see his second attempt at a conversion drifting agonisingly past the right hand post, but he did inevitably get his name on the scoresheet on the half hour mark courtesy of a 35-metre penalty.

An eye-catching break by the increasingly influential Byrne towards the end of the half looked like it might produce a third try for Leinster ‘A’, but his final pass was knocked on by second row Ben Marshall just shy of the Keys line.

Leinster 'A' still managed to finish the half in impressive style, however, as a successful penalty from close range by Marsh gave them a solid 16-0 interval lead.

Even at this relatively early stage, it was becoming a damage limitation exercise for the Keys, who were struggling to halt the momentum that their opponents had built as a result of their opening score.

It took Leinster 'A' just nine minutes of the second period to add to their tally. Marsh showed that his range was now fully in check when he split the posts from a distance of 40 metres.

A 53rd minute sin-binning for flanker Jevon Groves further increased the pressure on Keys but despite being at a numerical disadvantage moving into the final quarter, they did stick admirably to their respective defensive tasks.

Yet, they offered minimal threat from an attacking point of view, and when replacement Rhys Dyer was also issued with a yellow card shortly after Groves' return to the field of play, Leinster 'A' sensed an opportunity to add more tries to their overall total.

A third try was registered by the Blues 11 minutes from end when Fanning raced through for a converted score via an excellent offload by Marsh, and the tireless Coghlan was on hand to secure a potentially crucial bonus point when he broke free on the left hand side.

Marsh was marginally wide of the mark with his final kick of the game, but it was of little consequence on a comfortable day at the office for this young Leinster 'A' side.