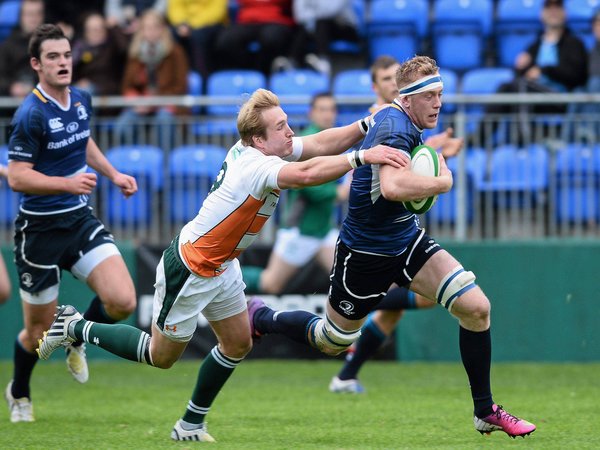 Eager to make an impression in front of an enthusiastic home support, Leinster 'A' applied plenty of pressure on the Ealing defence during the early exchanges.

Girvan Dempsey's young side got the score that their efforts deserved with just six minutes gone, as centre Tom Farrell finished off a fine move across the Ealing line on the right hand side.

St Mary’s College out-half Cathal Marsh was on hand to comfortably slot the conversion between the posts, and he repeated this feat just two minutes later following Sam Coghlan Murray’s powerful drive over the line for the second try of the contest.

At this point it was looking extremely ominous for the visitors from West London, although they did have a welcome opportunity to address their deficit when they were awarded a 30-metre penalty 13 minutes in.

Number 10 Andy Hall was narrowly off target with his attempt from an acute angle on the right, but he made no mistake with a terrific kick from distance just three minutes later.

This helped the English Championship outfit to settle into the proceedings, and as the first half progressed they started to pose plenty of problems for the Leinster ‘A’ rearguard.

However, with Darren Hudson and Tom Daly leading the way, the hosts were extremely compact in defensive, and continued to provide a potent attacking threat at various intervals.

Coghlan Murray, in particular, was making a massive impression on the game, and his magnificent line-break paved the way for captain Conor Gilsenan to touch down for his side's third try 12 minutes before half-time.

Marsh added the extras with relative ease and although Ealing finished the half on the front foot, they were unable to yield a score from their promising passages of play, ensuring that Leinster 'A' brought a 21-3 cushion into the second period.

In comparison to the opening 40 minutes, the early moments after the restart were relatively low-key, but with Ealing being hampered by the 42nd minute sin-binning of hooker Sam Wilkes, much of the action took place in the visitors' half.

With a fourth try yielding a potentially crucial bonus point, Leinster 'A' were always going to be keen to push on for further five-pointers.

They eventually crossed the whitewash once again on 51 minutes, as powerful number 8 Leo Auva’a powered over for a converted try following an intelligent pass by scrum half John Cooney.

Aside from his impeccable kicking at goal, Marsh was also making an impact from general play, and his excellent individual run after 54 minutes left lock Tadhg Beirne with a simple run in underneath the posts.

The influential Marsh was playing with great confidence at this stage, and added further to his tally with a seven-point salvo 14 minutes from the end.

This left all of 39 points between the teams. To their credit, Ealing never gave up and they finally the breached the Leinster 'A' defence five minutes after Marsh’s try with a well-worked score from skipper Thomas Anderson.

Yet, although Leinster 'A' might have been disappointed at the concession of this score, they did make amends in the closing stages.

Heineken Cup winner Cooney squeezed through in the right corner for the province's seventh and final try, which concluded a fine day at the office for the reigning British & Irish Cup champions.