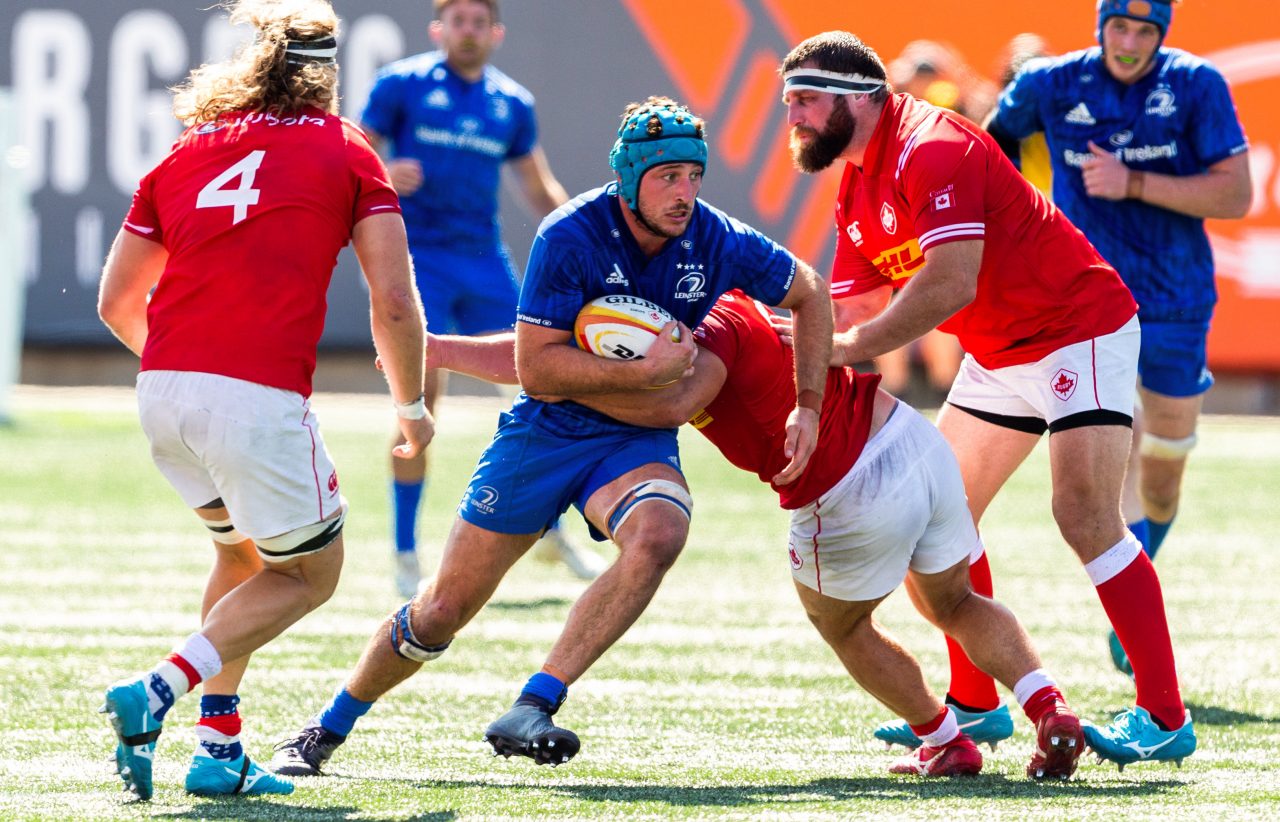 Captained by Scott Fardy and containing a number of young players, the Leinster team got off to a business-like start in their second pre-season friendly, which was played in hot and sunny conditions at Tim Hortons Field.

Tries from the impressive Max Deegan (5 and 26 minutes) and Bryan Byrne (16) fired Leo Cullen’s men into a 19-0 lead on the all-weather pitch, although Evan Olmstead’s score on the stroke of half-time got Canada off the mark.

In their first World Cup warm-up game, the Canadians looked to be heading for victory thanks to four second half tries – all converted by former Ulster player Peter Nelson with full-back Patrick Parfrey bagging a brace – as they moved 35-24 ahead.

However, Leinster put together the stronger finish as back rower Deegan barged over for his hat-trick try, adding to an earlier Josh Murphy effort, and Keenan claimed the match winner after not being held in the tackle.

Giving his post-match reaction, head coach Cullen said: “We’re pleased to get a win, probably not quite the way we would have liked it. I thought the guys started well, built a nice lead, 19 points in front. We probably got a bit sloppy after that, some poor discipline and we gave away a yellow card.

“I thought Canada were very strong during that period and put us under a lot of pressure. We talked about discipline at half-time, and at the start of the second half we came out and gave away a few more penalties. Put us under a bit more pressure, and full credit to Canada, it was a very, very competitive game.

“At the end, I was pleased with the way our guys came back after being 11 points behind. So the guys showed some good resolve and we’re delighted to get a win. We’ve had some great support here today, so all in all a good pre-season outing.”

Cullen’s youthful side were the early aggressors, quickly pinning Canada back following two penalties and Ciaran Frawley’s clever chip led to a five-metre scrum. Canada leaked two scrum penalties, and a series of pick-and-goes ended with Deegan scrambling over with Will Connors and Michael Bent in support.

Frawley’s missed conversion was followed by a promising lineout opportunity for Canada, but ever-reliable skipper Fardy produced the steal and a subsequent scrum penalty cleared the danger, albeit that Kyle Baillie pinched the next lineout.

Still, Leinster were looking the more potent in attack and from a turnover inside their own half, Adam Byrne, Caelan Doris and Rory O’Loughlin all gained ground. Barry Daly was released on the left and despite the move breaking down, Ed Byrne managed to intercept Tyler Ardron’s attempted pass and he fed his twin brother Bryan to crash over.

Frawley converted and it was his midfield break which set the wheels in motion for the province’s third try. His half-back partner Hugh O’Sullivan was held up over the line before the resulting scrum allowed Doris to go close and Deegan picked up from the ruck to dive in from a couple of metres out.

The curling conversion from Frawley made it 19-0, the latest concession drawing much better play out of Canada as DTH van der Merwe and Ciaran Hearn began to carry more of a threat. Bryan Byrne paid the price for repeated team penalties with a sin-binning for a ruck offence.

In the hooker’s absence, the Canadians flooded forward with Lucas Rumball charging up towards the Leinster 22 and O’Loughlin had to react smartly to deny van der Merwe out wide. However, Deegan’s subsequent lineout throw was claimed at the rear by the hosts and lock Olmstead barged over a few of phases later.

Before Leinster were restored to 15 men, captain Ardron broke from a close-in scrum to double his side’s tally. Having thwarted replacement Joe Tomane from close range, Canada hit the front in the 59th minute after full-back Parfrey finished strongly in the right corner from passes by Nelson, who also converted with aplomb, and Ben LeSage.

Quickly getting back on the front foot, replacement half-backs Harry Byrne, on his senior bow, and Patrick Patterson helped to send O’Loughlin darting through to five metres out. Possession was retained and Murphy shipped a tackle before stretching out to make the line. A TMO review ruled out a double movement and the unconverted score left it at 24-21.

Nonetheless, Canada strung together back-to-back tries past the hour mark to heap the pressure on Leinster. Baillie charged down a Byrne kick to go in under the posts, and then Nick Blevins’ break from halfway and exchange of passes with van der Merwe set up Parfrey to score again.

Nelson nailed both conversions, opening up an 11-point lead but Leinster’s young guns showed no signs of panicking. A scrum penalty launched them forward and the rewarding pick-and-goes of the first half returned as Deegan squeezed in under the posts, supported by Vakh Abdaladze and Ryan Baird.

Byrne’s conversion set up a grandstand finish at 35-31, with Ireland Under-20 flanker Martin Moloney among those gaining valuable experience off the bench. A Nelson turnover penalty near his own line lifted Canada, but a powerful counter-ruck from Leinster earned them a late scrum platform.

The hard-carrying forwards drove Canada back to their posts, and space finally opened up for Patrick Patterson and Harry Byrne to release Keenan to the right. He evaded the clutches of two defenders, bouncing up off the ground to score with Byrne’s conversion sealing a thrilling three-point triumph. 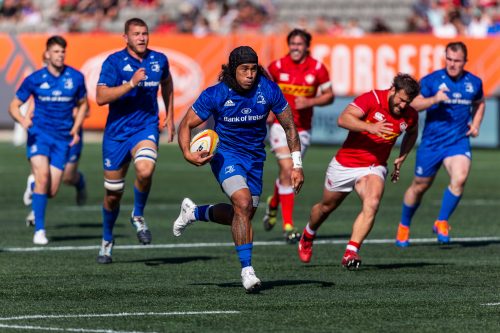 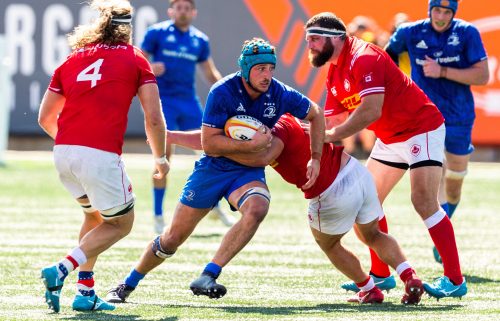 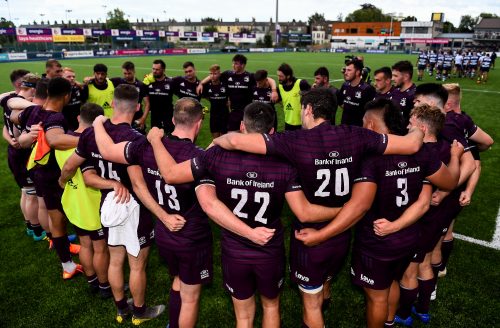 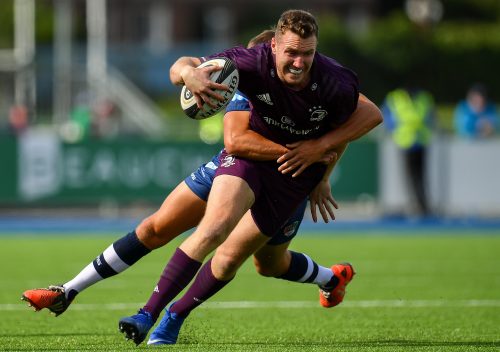