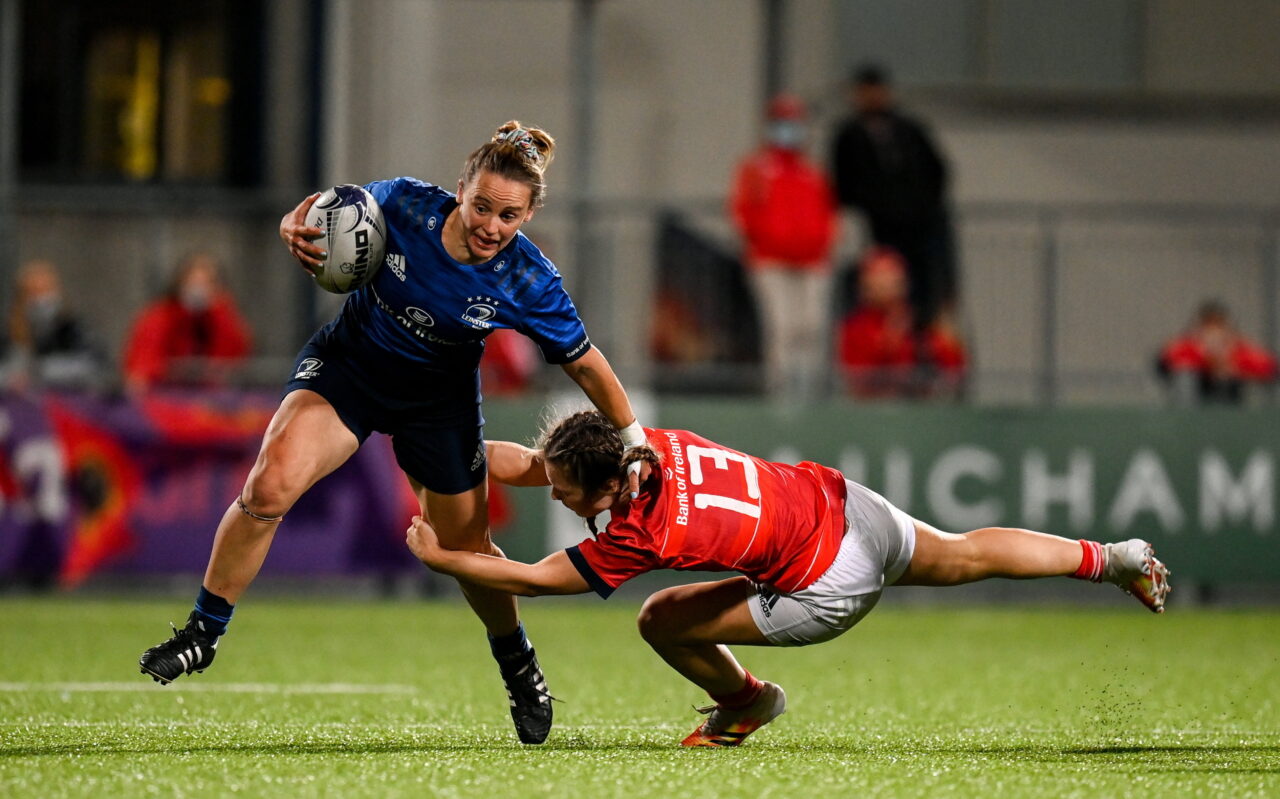 Munster Rugby came from behind to wrestle the Vodafone Women’s Interprovincial Championship away from Leinster Rugby at Energia Park.

Trailing 7-0 early on, they scored 19 unanswered points with player of the match Chloe Pearse accounting for two tries.

This was always going to be a physical affair and there was a frenetic opening, Munster flanker Maeve Óg O’Leary taking off for 30 metres, full-back Aoife Doyle cutting back and prop Pearse charging hard.

It took all of Leinster’s organisation to repel that attack before Clodagh O’Halloran claimed a lineout and O’Leary was off again, Doyle putting left-wing Stephanie Carroll in with a chance that was foiled by full-back Ella Roberts.

The home side was under heavy fire, requiring a solid scrum, an Emma Murphy steal at the lineout and a Roberts surge up the left to work their way out of trouble.

No 8 Jenny Murphy made up for giving away a penalty with a hard hit, while lock Mairead Holohan ripped the ball in the tackle.

The aerial dominance of O’Halloran was defused by a counter ruck from Murphy to mess up the Munster ruck.

It was Murphy again, forcing a penalty at the breakdown that finally enabled Leinster to secure an attacking position, Nikki Caughey’s crosskick tumbling away from Meabh O’Brien.

When Munster support runners went off their feet, Leinster opted to run an easy penalty kick.

Murphy was again involved, along with tighthead Victoria O’Mahony, for hooker Lisa Callan to touchdown, Murphy converting against the run of play in the 18th minute.

A touch of indiscipline cost Leinster a penalty and Pearse didn’t have to be asked twice to split the defence from 35 metres to make it 7-5 at the end of the quarter. 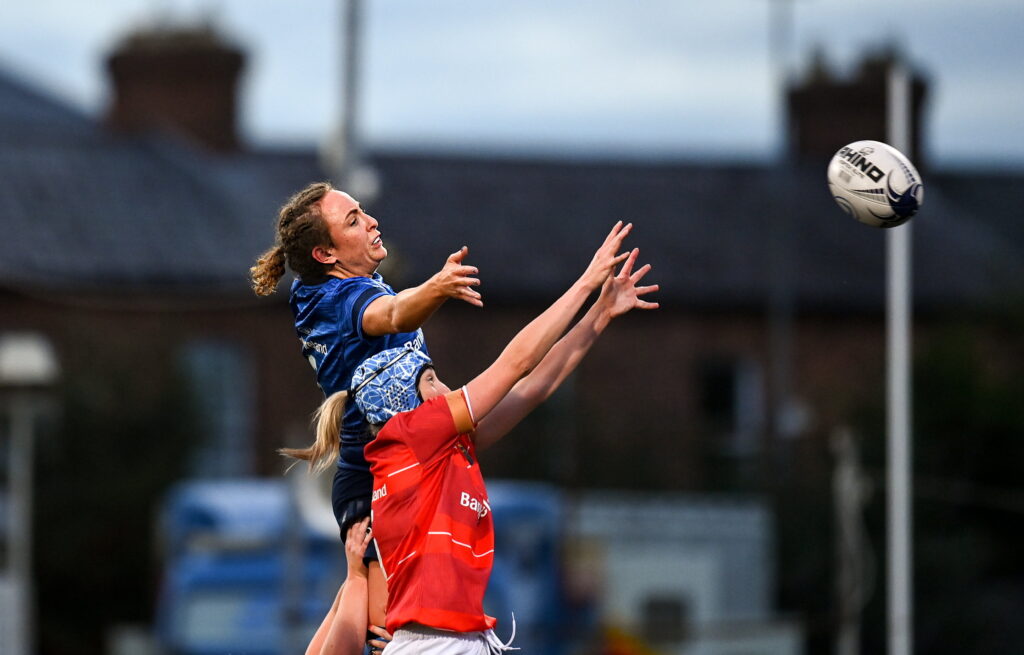 Munster were making the most of the running, stretching the home side down both flanks until Murphy clamped down for another penalty.

O’Leary was proving difficult to stop and the Munster maul generated metres on the back of a typical drive from the flanker.

Not for the first time, Jennie Finlay managed a rip in the tackle only for Elaine Anthony to be whistled and binned for taking out a player beyond the ball.

As both teams warmed to the challenge, the ball was in play for long phases, a testament to their continuity and the skills on show.

If there was one area Leinster had the upper hand, it was on the floor, scrum half Lauren Farrell-McCabe snatching another ball to give the Blues just their second real attack.

The Munster defence found a solution to this problem by focusing on Murphy in tight and causing a mistake in midfield to leave it 7-5 at the break.

Munster were quickly back into their flow until centre Michelle Claffey took girl, ball and all, to put the home side on the front foot.

The trend for running penalties did not continue when Munster caved in under the pressure, Murphy missing to the right.

O’Halloran did remarkably well to pluck a Leinster throw and add 20 metres on the ground from an unlikely break.

But, flanker Finley ripped the ball from Siobhan McCarthy’s grasp and Vic O’Mahony was too strong on the floor, forcing yet another penalty.

The Blues’ preference to run out of defence was countered by Munster’s aggression in the tackle. Claffey did well up the middle, while Ugwueru caught Meabh O’Brien under the stands.

Space was at a premium. The onus was growing on Munster to push the pace, Anna Caplice improvising an overhead pass and Doyle subdued by Farrell-McCabe near the touchline. 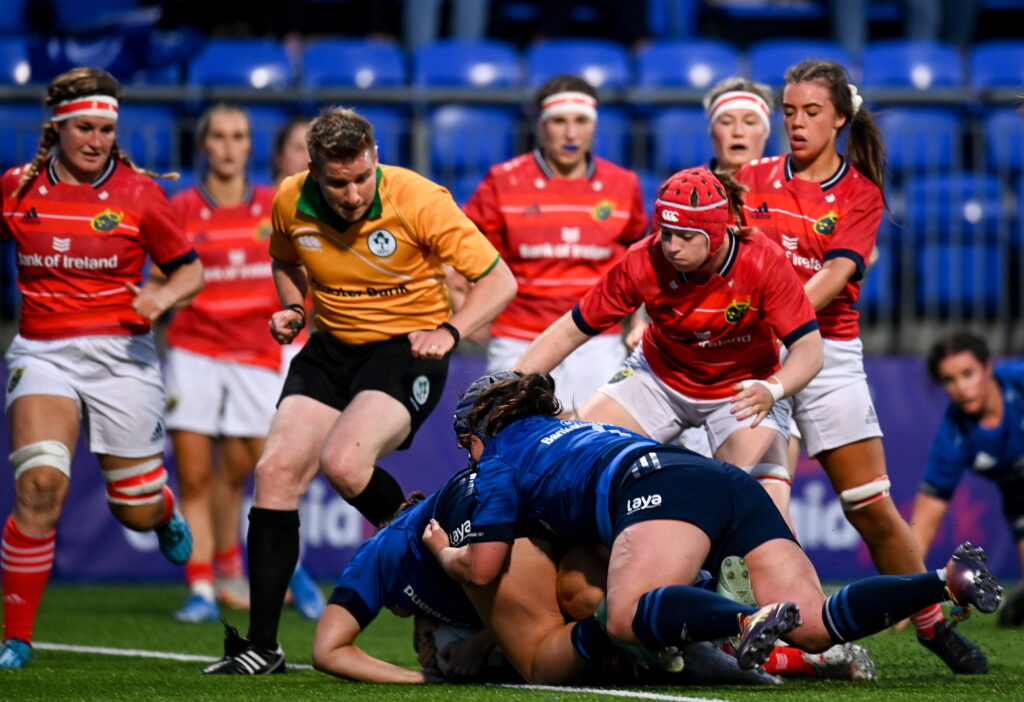 Leinster looked to have escaped when lock Holohan stole a lineout.

But, Munster hounded the ball carriers to draw a penalty. Prop Pearse was the beneficiary of quickfire drives to crash over for Nicole Cronin’s conversion to confirm a 12-7 lead in the 62nd minute.

The tempo rocketed as Leinster looked to respond, Claffey making a dent before Pearse wrestled the ball away and hooker Deirbhile Nic A Bhaird hammered into Roberts.

It didn’t really look like an occasion in which either would strike from distance.

The final quarter would come down to controlling possession and territory.

Out-half Cronin launched a ball deep inside the 22 and Munster were able to win it back through a brigade of chasers.

It created danger on the right where workaholic Claffey took Doyle by the ankles.

Still, Munster were in position. They executed a lineout and went through the phases until Murphy went too high on Cronin.

The No 8 was binned, but Cronin’s shot at goal slipped left and wide.

It was a major reprieve for Leinster, especially given how they were down to 14 for the rest of the game.

They had to find a way out of their half, Emily McKeown giving it a go and the forwards doing their best to combine.

When a promising move broke down, Cronin turned the screw from a kick and popped up again to send Deirbhile Nic A Bhaird in for the decisive try, converted by Cronin. 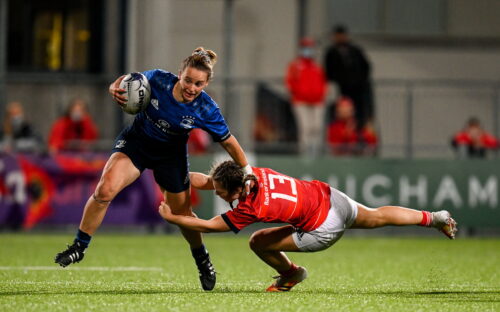 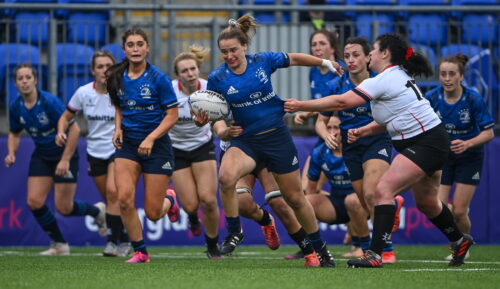 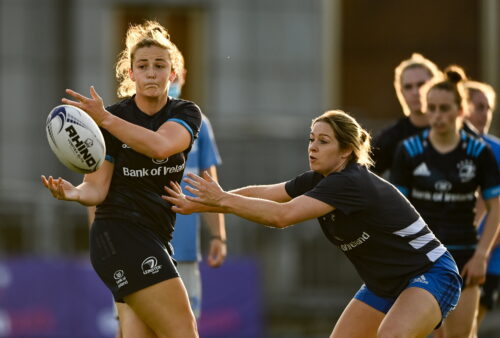 Gallery: Leinster team train ahead of interpro decider against Munster