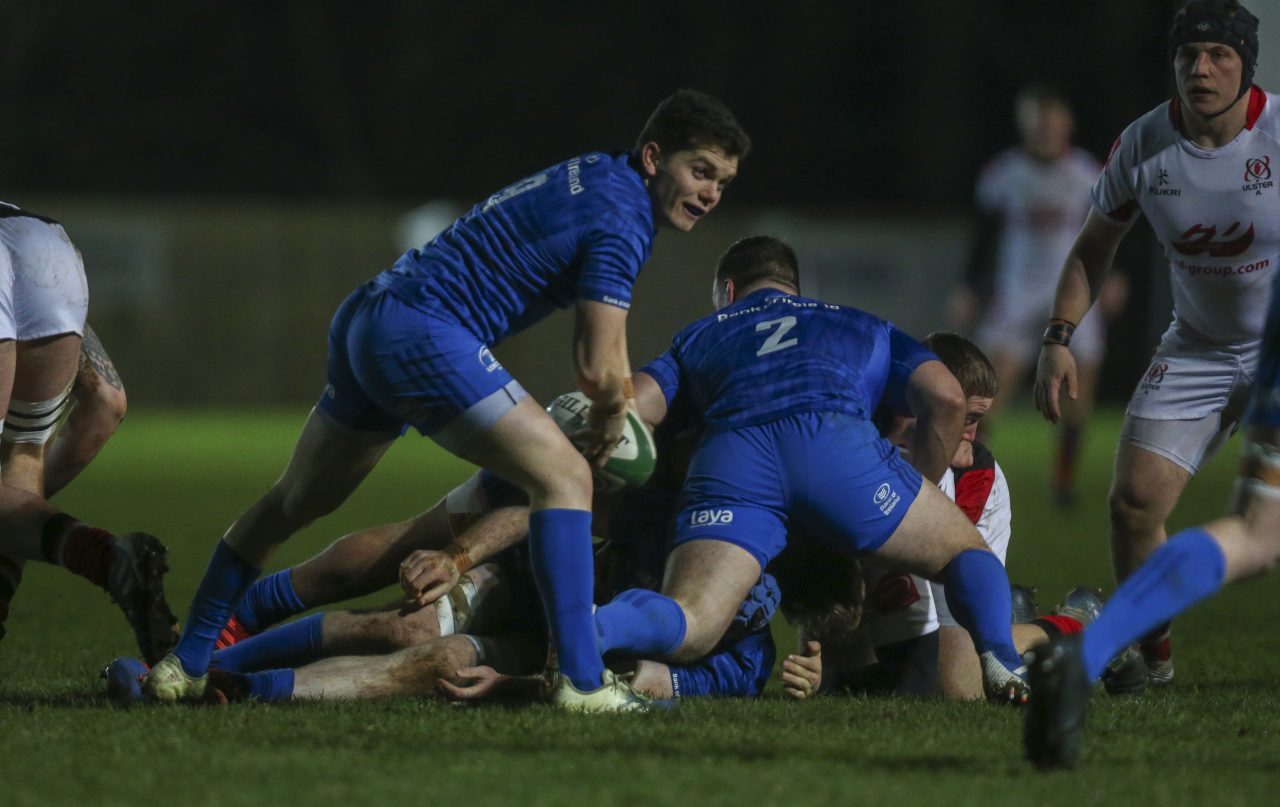 Leinster Rugby ‘A’ cruised to a nine-try 61-12 win over their Ulster counterparts in Belfast tonight, with Hugh O’Sullivan and Tommy O’Brien both crossing the whitewash twice. John Dickson reports from CIYMS RFC.

Noel McNamara’s young guns, who had defeated Ulster ‘A’ 31-10 to retain the Celtic Cup title earlier this season, were quick to show their attacking intent in bitterly cold conditions.

They hit the front in the third minute when centre Tommy O’Brien made a neat break and sent the support O’Sullivan clear to score. UCD clubman Tim Corkery converted to make it a seven-pointer.

The hosts had hooker Zack McCall sin-binned on the quarter hour mark for tip-tackling Ryan Baird close to the Ulster try-line. Leinster ‘A’ responded with two tries during the 10-minute period, with flanker Sean O’Brien smashing his way over and impressive lock Oisin Dowling adding a similar effort.

Corkery converted the third try to open up a 19-point lead, but Ulster ‘A’ hit back in the 33rd minute when scrum half Lewis Finlay created room out wide for Luke Pollock to force his way over in the left corner. Bruce Houston topped it off with a brilliant conversion.

However, Leinster ‘A’ scored right on the cusp of half-time with their fourth try following a sustained bout of pressure. It eventually saw influential scrum half O’Sullivan dart over close to the posts for Corkery to convert, leaving it 26-7 at the break.

It was the Ulstermen who struck first on the resumption when flanker Marcus Rea stormed clear on the Leinster ‘A’ 22 and managed to make the line for an unconverted try. Crucially, McNamara’s side snapped back with another try and kept the home side scoreless for the remainder.

A great effort from fleet-footed full-back Cian Kelleher, converted by Corkery, was followed by a fine score from captain Scott Penny who scored his strength and speed to storm clear and touch down. With 55 minutes on the clock, the scoreboard showed 40-12.

It was all one-way traffic to the finish as Ulster ‘A’ coughed up a loose pass which Tommy O’Brien seized upon to open his account. He doubled his tally soon after, profiting from some nifty play by replacement scrum half Paddy Patterson who worked his magic from the base of a midfield scrum.

Out-half Corkery continued to add to his handsome haul, closing out the game with 16 points in all. The final Leinster ‘A’ try came when Ulster ‘A’ were penalised at a ruck and Patterson took a quick tap to scamper clear and score.