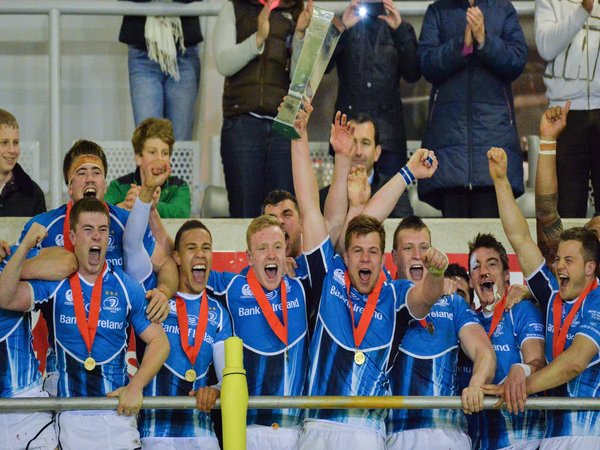 There was huge drama at Kingston Park as Girvan Dempsey's young team forced a late scrum penalty and Noel Reid converted it to complete a famous night for Leinster Rugby, with the seniors and 'A' side both winning their respective finals.

Leinster 'A' are the second successive Irish winners of the British & Irish Cup, as they handed Newcastle their only defeat in this season's competition to follow in the footsteps of 2012 champions Munster 'A'.

The visitors, who defeated Bristol and Munster 'A' en route to the final, put in a performance dripping with pride to continue the province's trophy winning traditions.

Falcons out-half Joel Hodgson opened the scoring for the hosts with an early penalty from all of 35 metres out. Leinster 'A' were penalised for going offside and the Academy product did the rest to put his side 3-0 up.

Hodgson was in the thick of the early exchanges, going close to a try in the corner after the former RGS pupil latched on to his own chip over the top. Andrew Boyle came to the rescue with a try-saving tackle to earn Leinster 'A' a lineout five metres from their own line.

Leinster 'A' lost the ensuing lineout with Newcastle carving out their next attack through their industrious back-line, but to the visitors’ credit they stood firm in defence.

However, the pressure soon told, and after earning a scrum five metres from the Leinster line, Scotland international Rory Lawson sniped his way over the whitewash from close range. Hodgson converted for a 10-0 lead.

Dempsey’s side mounted their first attack with a quarter-of-an-hour on the clock thanks to full-back Fionn Carr, who breached the Falcons’ defensive line to sprint half the length of the field before being hauled down on the 22. From the breakdown Leinster 'A' were awarded a penalty by referee Neil Hennessy, but Reid's effort went wide of the post.

The Falcons were reduced to 14 men when Ollie Stedman was sin-binned for a late shoulder charge, and Leinster 'A' looked to take full advantage with Cathal Marsh pulling the strings in the midfield.

Making the most of the extra man, the provincial outfit crossed for their first try courtesy of outside centre Brendan Macken just short of the half hour mark.

Carr, who was having an assured game with ball in hand, again coasted through a gap before feeding scrum half Luke McGrath on the charge. McGrath switched the ball on the inside to Macken who dropped his shoulder before racing 20 metres to dive over. Reid converted to reduce the deficit to 10-7.

Leinster 'A' went within inches of taking a narrow lead into the break when Marsh scooted through a gap following a series of drives from Jack O’Connell and Conor Gilesnan. Newcastle underlined their steel in adversity to thwart their Irish counterparts.

Hodgson had the chance to extend the Falcons’ advantage to 13-7 just before the interval with his second penalty of the evening, but his attempt veered wide of the uprights.

The talented half-back missed with his third penalty 10 minutes into the second-half following excellent work from winger Zach Kibirige. The Teessider chased through a long kick to earn his side the penalty 25 metres out.

Midway through the second stanza Boyle illustrated his speed on the outside, and if it was not for a last ditch Michael Tait tackle, the Leinster flyer would have been in for a superb try.

Leinster 'A' were now turning the screw on Newcastle, and looked menacing in attack whenever they had possession of the ball inside their opponent’s half.

With 10 minutes plus injury-time left it was the turn of Newcastle to ask the questions up front with the Falcons heavies trundling the ball up. Despite enjoying phase after phase of attacks, Leinster 'A' weathered the storm to clear their lines and keep the score at 10-7.

Leinster 'A' had a golden chance to cross deep into injury time by virtue of Sam Coghlan Murray. The speedy winger received the ball on the overlap on the far side, but a desperate tackle from Andrew Higgins prevented the score.

Deservedly Reid levelled the sides in dramatic fashion with an injury-time penalty which went over via the post to take the game into extra-time.

Taiasina Tu’ifua was yellow carded early on in the first period of extra-time after he took out Carr when jumping for the ball.

On the stroke of half-time in extra time the impressive Carr crossed in the corner after superb creativity from Marsh. Reid fired the touchline conversion against the post and the visitors led 15-10.

But there was more drama to come, and Kibirige squared the game up moments later with a try that delighted most of the 3,838-strong crowd at Kingston Park.

Hodgson fizzed the ball to Fitzpatrick, who showed composure to offload to Kibirige on the outside. Hodgson added the extras under immense pressure to edge the Falcons 17-15 in front.

The RFU Championship table toppers looked to be heading for victory, but a mix-up between Hodgson and Kibirige when taking a quick lineout put the Dean Richards-coached Falcons on the back foot.

Leinster 'A' duly underlined their supremacy at the scrum to win a penalty, and Reid kicked the winning points to bring the trophy back home to Dublin.