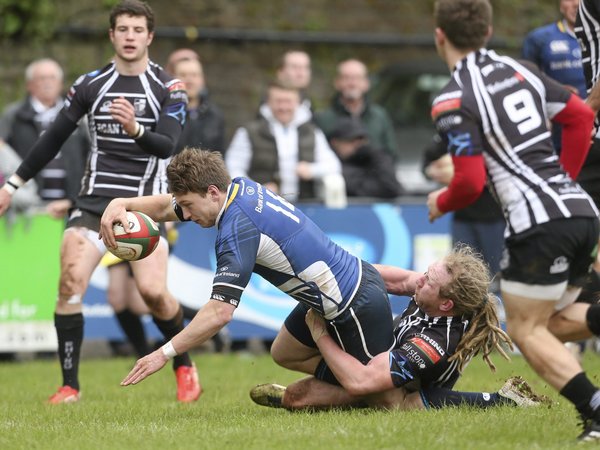 Today's dramatic semi-final clash at Sardis Road went to extra-time at 22-all and there were no further scores over the closing 20 minutes as Leinster 'A' advanced on try countback – three to one.

Girvan Dempsey's side survived a huge scare against the Welsh Premiership leaders having been behind for much of the contest in normal time.

But an injury-time try from replacement winger Andrew Boyle and a crucial conversion from out-half Cathal Marsh got the visitors back level.

Pontypridd out-half Simon Humberstone, who scored 17 points with the boot, missed a penalty from halfway. Extra-time was called for and neither side could muster a score as Leinster 'A' booked their place in the decider.

It keeps the province on course for back-to-back British & Irish Cup titles and they will host either Bristol or Leeds Carnegie at Donnybrook on Friday, May 23.

Humberstone kicked Ponty into a fifth minute lead with a long range penalty after a fiercely contested opening spell.

But Leinster 'A' were soon in front when winger Brendan Macken went past both Ponty props in midfield to grab the game's opening try. Marsh missed the conversion.

The visitors were well on top for 25 minutes but were made to pay for their failure to convert their territory into points when they were hit on the break.

Ponty quickly extended their lead with another Humberstone penalty. Flanker Ben Marshall clawed Leinster 'A' back into the game with a try from close range after captain Dominic Ryan had been held up on the line.

Marsh added the extras but a Humberstone penalty on half-time gave well-supported Ponty a 16-12 lead at the interval.

A Marsh penalty reduced Ponty's lead to a single point before the increasingly influential Humberstone cancelled out that effort with another well-judged kick.

With 15 minutes remaining Leinster 'A' lost Jack Conan to the sin-bin after he took Adam Thomas out in the air. Ponty wasted no time in taking advantage as Humberstone slotted his fifth penalty to make it 22-15.

It looked to be enough to secure Ponty the victory until some incredible late drama. Home winger Owen Jenkins kicked the ball into touch, thinking the game was over, only for referee Craig Maxwell-Keys to allow play to continue.

From the lineout Marsh found a gap but was held up over the Ponty line and the home side were able to kick to touch for a second time.

There was still enough time left for the lineout and Leinster 'A' struck right at the death as UCD clubman Boyle found a gap to score the province's third and most important try.

Marsh brilliantly held his nerve to land the levelling conversion under intense pressure and send the match into extra-time. The kick took him to 100 points in this season's British & Irish Cup.

There was nothing to choose between the two sides in the additional 20 minutes and Dempsey's determined charges held on to earn their place in next month's final.