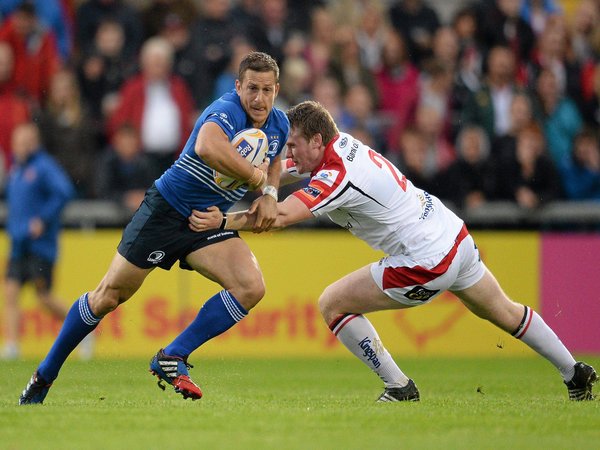 For long periods debutant out-half Jimmy Gopperth was the difference between the sides, contributing 14 points with the boot in an accomplished, controlled first outing in blue.

Dominic Ryan scored the opening try of the Matt O'Connor era as Leinster hit the ground running to open up a commanding 13-0 early lead in front of 10,500 spectators who arrived to witness the first match at the new-look Ravenhill.

Ulster's experienced New Zealanders Jared Payne and Nick Williams would lead the revival in the first half, but with a host of changes, they struggled to carry the momentum over; only regaining a head of steam in the latter stages to pinch the victory with a late Ian Porter try.

After a heavy film of rain had descended on Belfast, conditions were never likely to suit the free-flowing ambitions of two young sides and handling errors blighted a number of attacks.

Andrew Boyle showed a touch too much enthusiasm for the challenge as he careered into Rory Scholes in chase of a John Cooney box kick early on.

That aside, the visitors controlled all the early territory and Gopperth's first ever score for Leinster came via a straightforward eighth minute penalty from 30 metres out.

The visitors also appeared to settle into the rhythm of the new scrum engagement sequence. Ulster’s second early ‘set’ earned Leinster a penalty and from the resulting lineout, a breakdown infringement allowed Gopperth convert his second penalty of the night.

The superiority was further underlined in the 24th minute, flanker Ryan coming up with the ball after a 24th minute maul in the right hand corner. The angle did not trouble the new Kiwi kicker who made Ulster's deficit 13 points.

Payne, Ulster's captain for the night, would offer a taste of the atmosphere to come from the new Memorial End when he crashed over Noel Reid during the hosts' next attack to get his side on the board.

Ulster number 10 James McKinney began to settle into his role as his pack gained a footing and allowed their muscular back-line to run at pace from deep.

Ulster turned over a Leinster scrum in the minutes before half-time and with Williams fully warmed at number 8, Luke McGrath and Rhys Ruddock were unable to stop him from crashing over from close range. McKinney converted again to give Ulster a 14-13 lead at the break.

O'Connor resisted the urge to make wholesale changes at the break, refreshing just four in his pack compared to the 12 new faces in white jerseys. Gopperth nudged the PRO12 champions ahead again with another beautifully struck effort from close to halfway.

With so many new faces, Ulster had to begin from scratch and Leinster's experienced out-half got back to putting his pack in good positions. Gopperth's final act of an accomplished debut was to extend the lead to 19-14 with a penalty on the hour.

Gopperth’s replacement Cathal Marsh enjoyed precious few opportunities to get his hands on the ball, however. And the blue line was tested to breaking point, young replacement Porter coming up with the crucial 76th minute try – converted by McKinney – following a sustained period of pressure.

A competitive outing as pre-season friendlies go for both provinces and O'Connor will surely find plenty of reasons to be positive after a match in which his new side were largely dominant.

Gopperth was the controlling influence and once he departed the scene, Ulster were invited forward. They did not need to be asked twice.