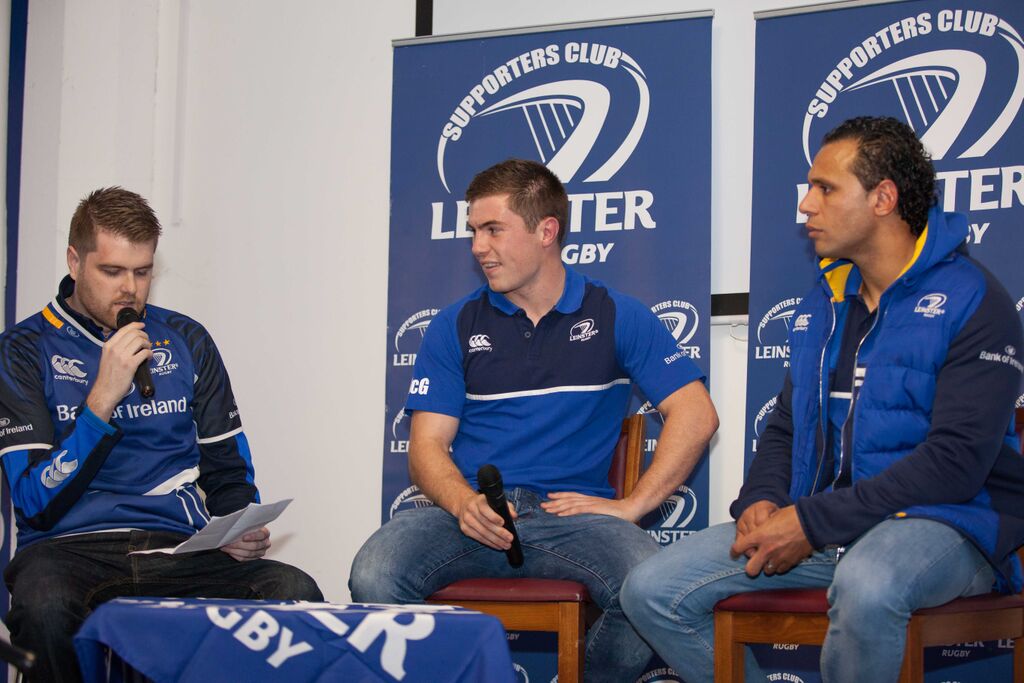 Returning to Leinster and Dublin was an easy call, Isa Nacewa told supporters gathered in The Laighin Out after the match last Friday.

Isa spoke about it not being a hard decision to return to Dublin and that life just ‘restarted’ when he drove through the port tunnel. He said that there had been a lot of changes in the squad and coaching line up since he left, pointing out Gary Ringrose and Ross Maloney as just two players who are stepping up during the Rugby World Cup when 19 senior players were away.

Nacewa and Luke McGrath were in the RDS supporters bar for a Q&A with the OLSC. Committee member Glenn Clinton congratulated Luke McGrath on the win and on his try. Luke commented that it was a hard fought win but that the younger guys in the team had really showed character.

Luke remarked how the transition from the Leinster academy to the senior squad had been a “bit of a struggle” but now that he had settled in the experience was brilliant. Luke, having a dig at Isa’s relative old age,  said that the younger members of the team looked up to him in his previous time with the province, with some even aspiring to be like him. Along with Isa, Luke said that as a youngster he looked up to Leo Cullen, Jamie Heaslip and Sean O’Brien.

Both Luke and Isa spoke about how the team were looking forward to getting the Irish Internationals back after the earlier than hoped RWC exit. When asked for predictions for who would win the tournament, the players wanted an Argentina vs New Zealand final , with Isa clear on which country he wanted to win overall  -NZ!

Turning to the upcoming European Champions Cup, Isa said he was most looking forward to testing himself among the best players with the Toulon fixtures.  Luke, who made his European debut last season, spoke about the competition for places for the team for these big cup ties. The annual Leinster v Munster home and away fixtures were also a favorite for Isa

Glenn reminded supporters that Leinster would be playing pretty much every weekend until the end of the year. Luke spoke about the strength and conditioning team who are working hard to get the players through such an arduous schedule, emphasising the importance of recovery. Some players will be off for a swim the next day for example – Luke observed that this was especially important with someone of Isa’s advanced years!

Isa spoke about the fact that Leo Cullen is applying high standards and encouraging the team everyday not to be average; to take each game at a time and not look too far forward. This is especially important with back-to-back fixtures like the team is facing for the next three months.

Both players commented that the team were focused on silverwear and being in the right place at the end of the season.