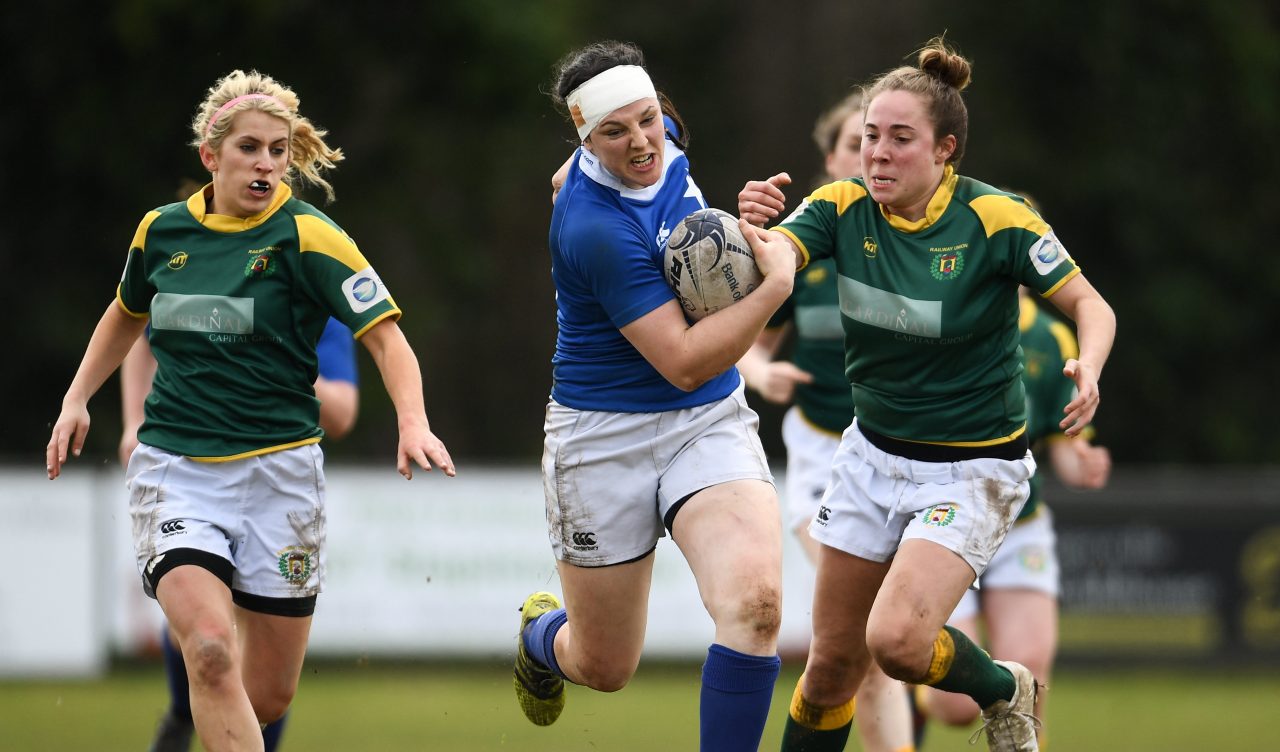 The Bank of Ireland Leinster Women’s League Finals took place on Sunday in Naas RFC. It was a fantastic day for rugby with a pleasant weather that made up for the heavy rain and poor conditions during the Finals last year in Donnybrook and St Michael’s College.

Four titles were decided on the day after all eight teams came through their league campaigns and playoff matches to reach the division deciders.

Portlaoise and North Midlands Falcons got the day underway with the Division 4 Final. Portlaoise were favourites to take the title having won both games against the Falcons during the regular season (17-0, 5-7).

However, a dominant team performance and three tries from electric full-back Aoife Murphy turned the form book on its head as the Falcons – an amalgamation of Cill Dara RFC and Portarlington RFC – secured a 19-5 victory.

Portlaoise owned the ball in the opening minutes but Falcons took control of the game thanks to commanding performances from half-backs Kate Tynan and Hannah Mulcahy.

The Falcons pack worked their side into good positions throughout the first half. 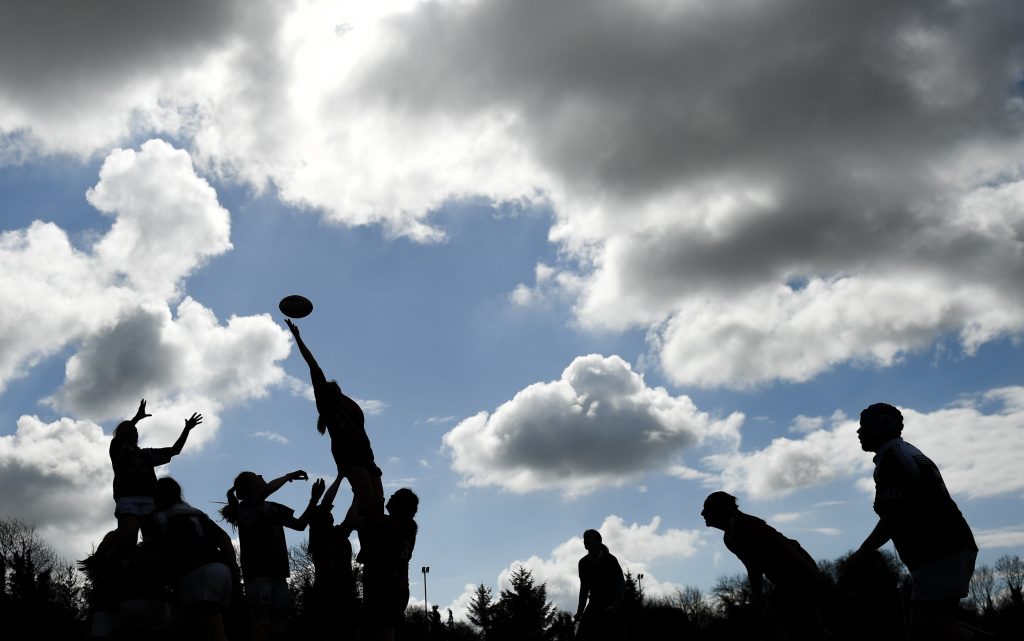 Only some excellent cover defending from Yvonne Palmer, Gemma Palmer, and Emma Brophy kept the Falcons out but on the half-hour mark some brilliant footwork from Murphy allowed her to evade some tackles and she scored under the posts.

Portlaoise showed signs of working their way back into the game through their pack in the second half, but it was the Falcons who scored next through Murphy again.

Portlaoise responded immediately with a fine team score finished out wide by Shauna Carroll but any chance of a comeback was snuffed out as Murphy completed her hat-trick after good work from Caoilfhionn Culliton.

The victory crowned a season of wonderful progress for the Falcons. They have been spearheaded by promising young coach Cassie Dunne who will have been delighted with the all-around performance of her squad in this exciting final. 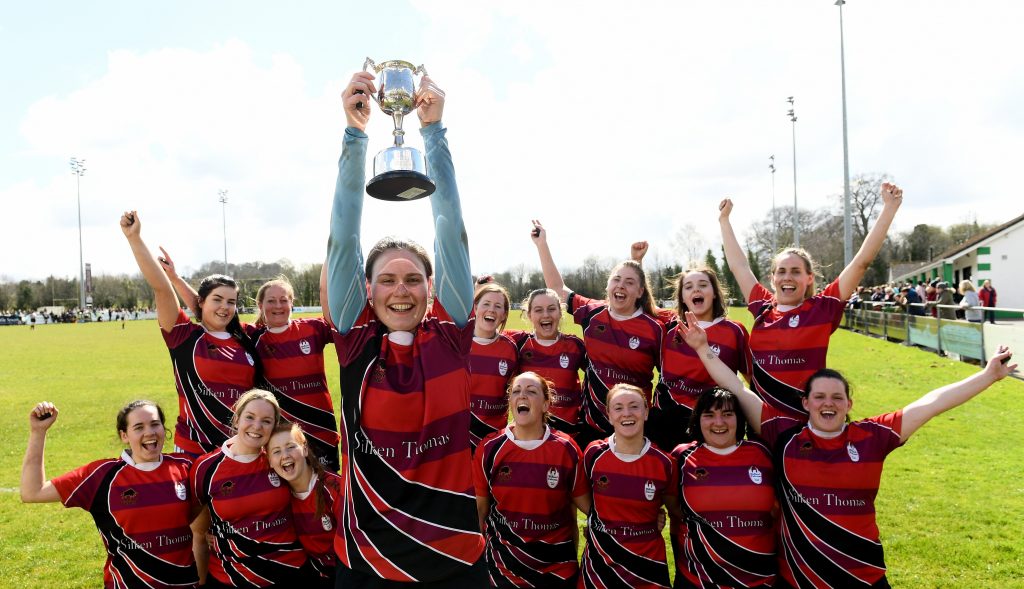 This game was a titanic struggle between two teams that were meeting for the third time this season. Balbriggan might have been strong favourites, but Navan took hold of the game from the off.

The Meath club had the better of possession and enjoyed long periods in the opposition territory. They were the first to score through a well-taken penalty early in the first half.

Balbriggan eventually struck back after half an hour with a converted try from out-half Dearbhla Sheridan. Balbriggan were close to scoring again in the first half but determined Navan defence kept them out. 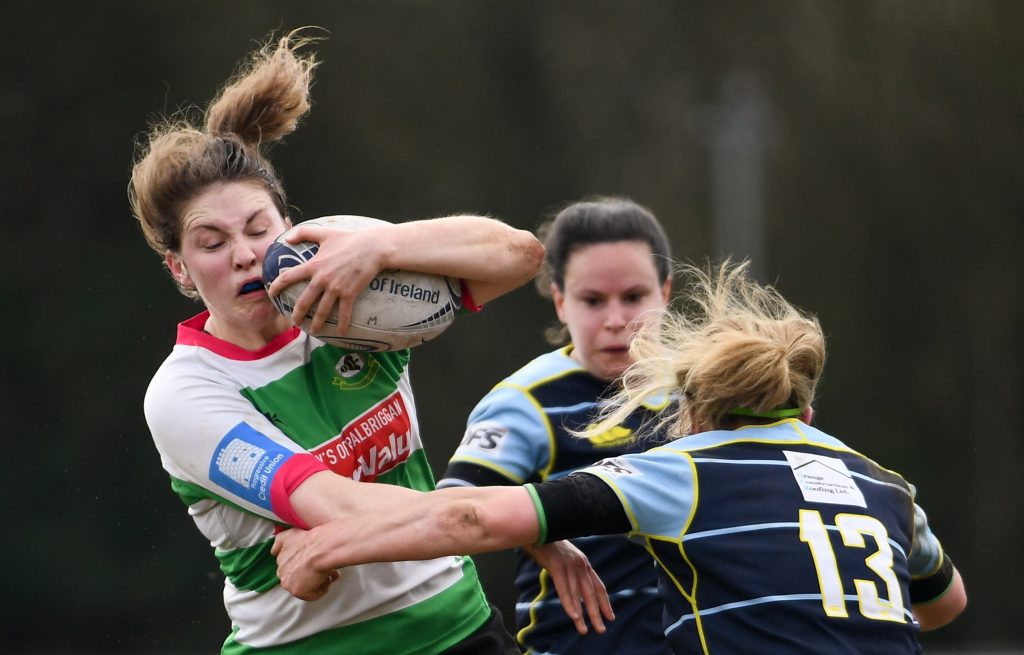 Navan went for it after the restart and dominated the second half. Their hard work was finally rewarded after 25 minutes with a fine try through their forwards. The conversion was just wide but Navan led 7-8.

The North Dublin women made good use of a short spell of possession to run in a wonderful try through centre Siobhan Verdon with just three minutes left on the clock.

The conversion was missed, leaving the score at 12-8 to Balbriggan.

There was a nervy end to the match but Balbriggan held out to secure the title and promotion to Division 2 next season.

Both Navan and Balbriggan remain in the Paul Cusack Cup and could yet meet again in another final.

Each and every player put in a huge effort for their incredible supporters and, despite the fight that the opposition brought, Tullow prevailed.

After 10 minutes of Tullow dominance, Suttonians were first to score when they were awarded a penalty and took advantage of a defensive lapse to score from the Tullow 10-metre line.

Tullow equalised with a fine maul from a lineout and hooker Maggie Kelly went over with out-half Hilary Griffin converting.

On 30 minutes a training ground move from the 10-metre line saw Tullow full-back Chloe Farrell cross the whitewash, with the conversion striking the post. 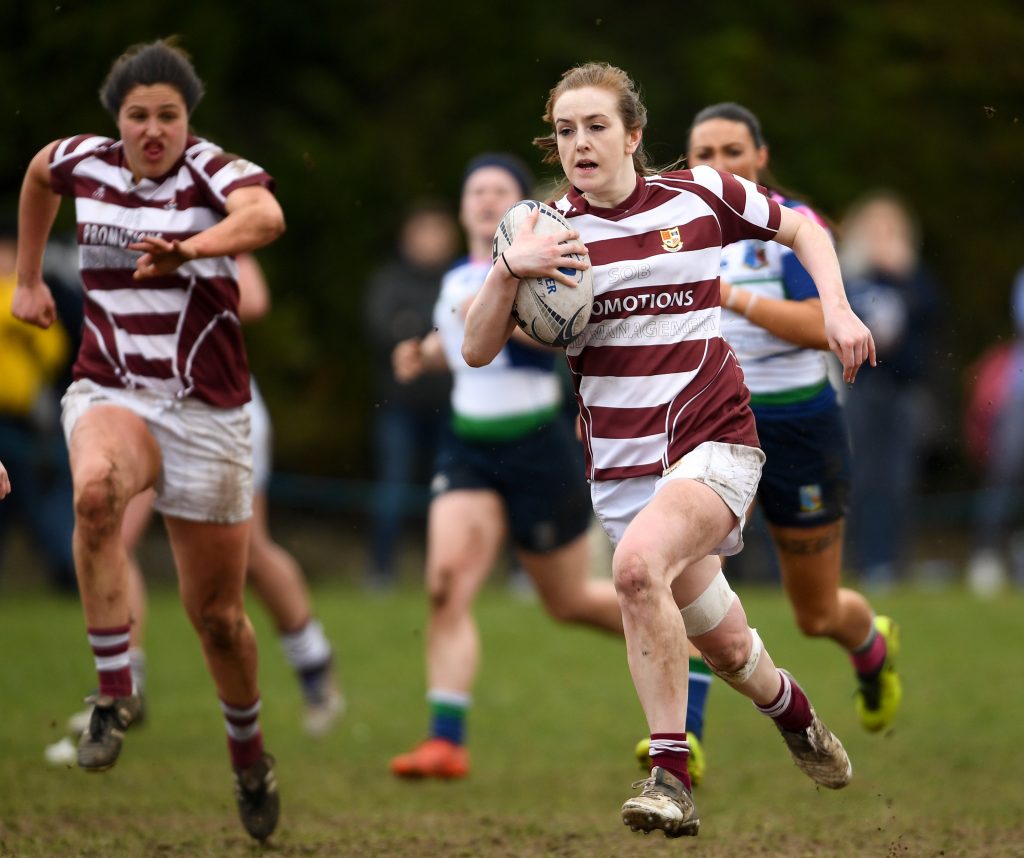 Suttonians started the second half strongly with a try to level the game. A while later they followed that with a penalty to give them a three-point lead.

Despite this setback, Tullow found a way back into the game through scrum-half Ann Marie Fitzgerald. She found Amy McGrath who’s strong carry allowed Grace Kelly to finish in the corner.

The try levelled the game, and, with the pressure on, Hilary Griffin slotted the crucial conversion to claim the Division 2 title.

The excitement was high for this Bank of Ireland Leinster Women’s League Division 1 Final between St Mary’s and Railway Union J1.

A campaign of 14 league games saw Mary’s win 11, finishing top by a margin of 11 points and they carried this dominance into the playoffs and the final. 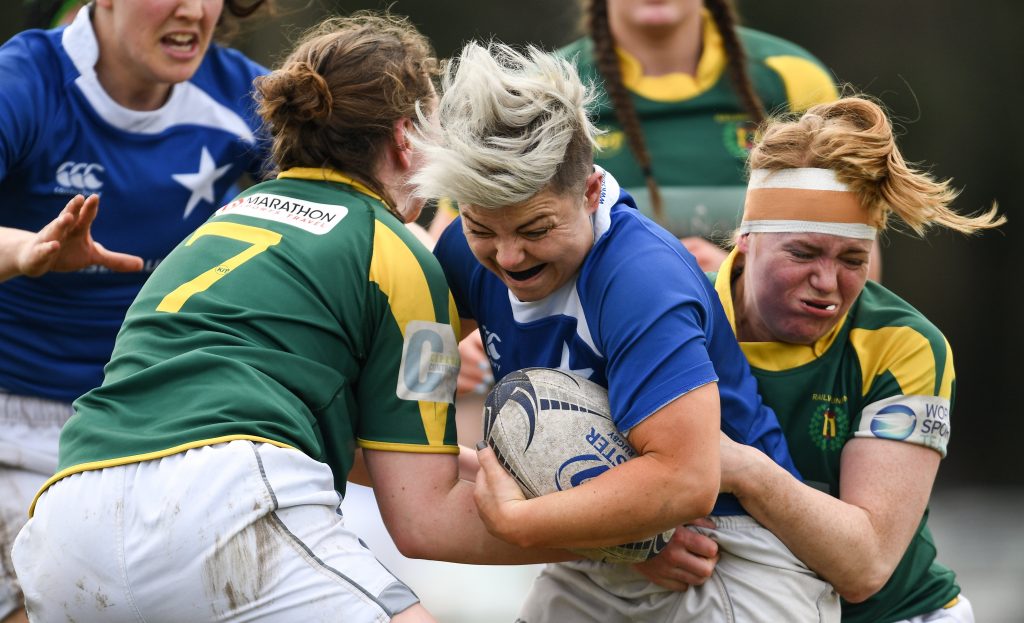 Multiple penalties marched St Mary’s down the pitch where captain Aoife Moore crossed the whitewash with Richardson once again converting.

There was a lot of back and forth between the teams for the third quarter but an excellent penalty from Richardson extended Mary’s lead.

Railway showed a very good standard of rugby throughout for such a young team, but St Mary’s took the Division 1 title with a deserved 25-o victory. 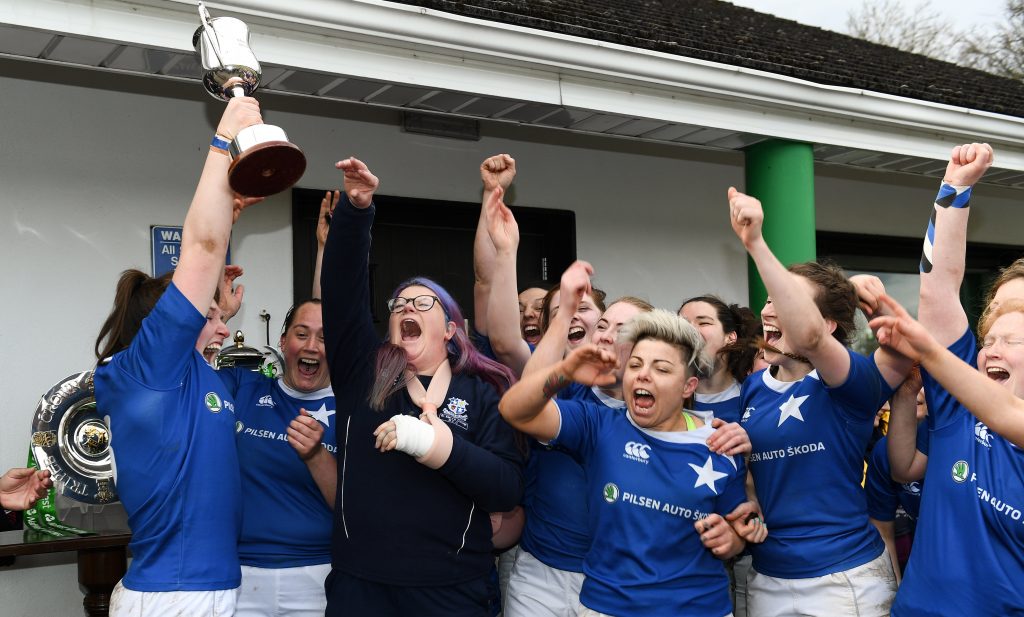 Thank you to everyone who travelled to support the teams, with a very special mention to Dave McKeown and everyone in Naas for hosting the finals and doing an incredible job.

A big shout out to Greystones RFC, who despite not having their team playing any final, made it all the way to Naas to see a great display of rugby throughout the course of the day.

Congratulations to all of the teams who reached, and won the Finals, and to their coaches for all their hard work and dedication throughout the season.