Rolland to retire at the end of the season… 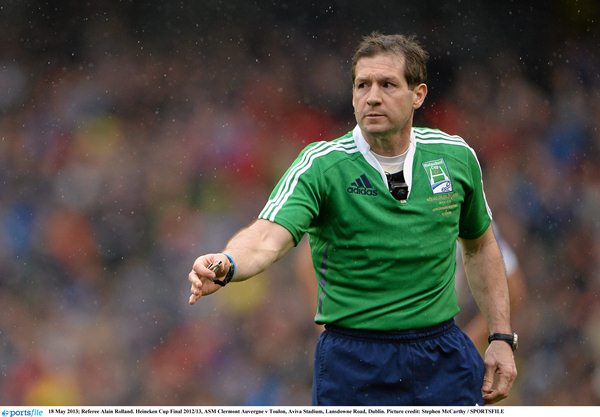 Speaking today Rolland said, ‘The first thing to say is that, now I have decided that this will be my last season, I can turn my complete focus to continuing to enjoy my refereeing as much as ever and performing to the best of my ability.

‘I have had an incredible journey and over the Summer, I have thought long and hard about this – I have discussed it fully with my family and with Owen Doyle, and it just really feels that I am making the right call.

‘There are several factors involved which all add up – Rugby World Cup is fully two years away, I am starting a new job, and I want to spend more time with Lizzie and our young family who have been very patient, I cannot thank them enough for their total support over such a long time.

‘I also want to thank sincerely the IRFU, and particularly Owen who has guided and coached me throughout my career. When we first sat down to chat about my taking up refereeing I don’t think either of us had a clue as to where it would go, although there were definite goals! I would certainly advise those coming towards the end of their playing career to have that same conversation.

‘Thanks are due also to the iRB who have appointed me to so many wonderful and exciting matches all over the world. I will finish without one ounce of regret, and my hope is that all present and future international referees will enjoy it as much. Under the guidance of Joel Jutge I am certain also that RWC 2015 will be a great opportunity, and I wish those who will be selected a wonderful and successful time.”

Owen Doyle, IRFU Director of Referees said: ‘In the modern era there is yet to be a better referee than Alain. He is always great to work with, bringing the highest levels of professionalism to everything he does.

‘While the World Cup Final in 2007 was perhaps the pinnacle of over 65 International Tests (a quite astonishing number) over 70 European Cup matches, including two Heineken Cup Finals, Alain regards every match in very much the same way – he always feels it a huge honour to be involved, and to do his best to facilitate the game for the players courteously and with an even hand.

‘For those who will follow he is the complete role model. We will be very sorry to lose him and, at the same time, absolutely respect his decision and cannot thank him enough for his extraordinary contribution.”

IRFU President, Pat Fitzgerald, commented: ‘From the perspective of the Union it has always been a great feather in our cap to have Alain officiating across the world to such a high level over such a long period. He will retire right at the top and will leave a great legacy for the next generation of referees.”