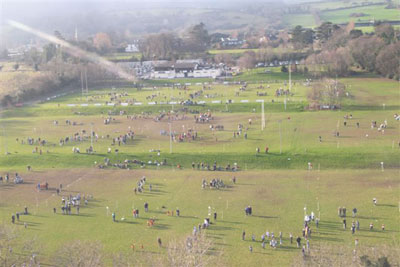 Leinster Rugby are saddened to hear of the death of a true club stalwart of De La Salle Palmerston FC, Ronnie Buckley (RIP)…

A proud PALMO and Salmo man, he served the club with great distinction for well over 50 years at all levels, as a player, a coach, a member and as a friend.

During his Palmerston playing days, he was fondly known as “The Boot”. This was due to the exceptionally high success rate for kicking penalties and conversions. It’s widely believed he was probably the most successful kicker to ever wear the club colours.

The Buckley family involvement with the club, is through many generations. With Ron taking great pride that his son Ronan regularly played on Salmo teams during the 90’s and 2000’s.

It was also no surprise to anyone that knew Ron, that when he found his daughters’ boyfriend played a bit of rugby, that he too was to be brought up to Kilternan! Now as his son in law, Philip Heatherwick, coaches in the Youth section.

A regular at the club each Sunday, he watched with great pride his grandsons proudly wear the club colours that he himself had worn so many times.

We offer our sincerest condolences to the Buckley family on their sad loss.

Ron Buckley’s funeral mass will take place at 10am on Monday at Foxrock Church.

May he rest in peace…