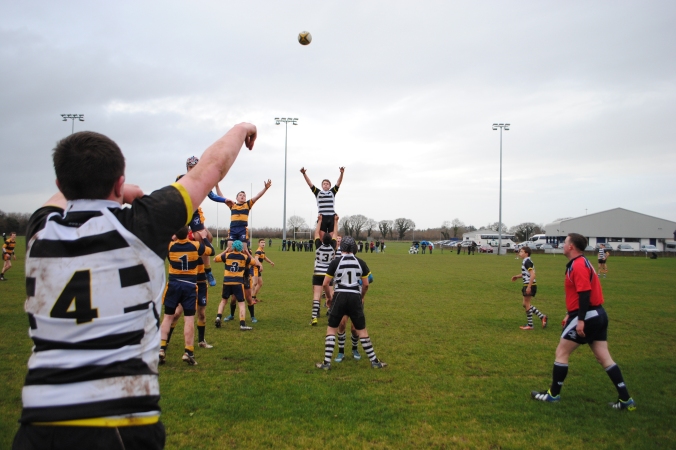 Alex Bain, a 3rd year student in Cistercian College Roscrea, tells us the story of the match between his school and King’s Hospital in the 2nd round of the Fr. Godfrey Cup sponsored by Beauchamps…

This 2nd round Fr. Godfrey Cup match started with Roscrea kicking to King’s Hospital, and the ball heading straight into touch. A scrum was formed, followed by a strong surge by Kings Hospital that brough them within 10 metres of the Roscrea line. Unfortunately for King’s Hospital they knocked the ball on and missed out on the chance to open the scoring.

Roscrea’s Alan Murphy, who had come on as a blood substitue, had two opportunities to give his team the opening score of the game, but it was Eamonn McMahon who opened the scoring with a try for Roscrea, followed by  a conversion from Conor Kelly.

King’s Hospital replied with a penalty to put the score at 7-3 in Roscrea’s favour.

Following a great penalty kick in to the corner for Roscrea from Conor Kelly, Finbarr Crowley scored a try after multiple phases of play, with Kelly again kicking the conversion.

Just before half-time, King’s Hospital responded with a good penalty to make the score 17-6 to Roscrea at the interval.

The second half sparked into life in the 60th minute when King’s Hospital intercepted the ball and scored their first try of the game which was successfully converted, with the game finely poised at 17-13.

Another successful penalty from Conor Kelly gave Roscrea some breathing space, and a seven point lead going into the closing stages.

With 10 minutes remaining, Roscrea were five metres from King’s Hospital’s try line, but the ball was turned over. As King’s Hospital attempted to kick away, Daniel Ward surged forward, blocked the kick, caught a lucky bounce, and scored under the posts.

Throughout the match, Conor Kelly and Adi Donovon kicked multiple excellent kicks to touch. Roscrea defended tremendously just in front of their try line for the last five minutes and won this quarter-final in the Godfrey Cup with a final score of 27-13.

Roscrea will play against St. Patrick’s Classical School from Navan in the semi-final on January 28th in Westmanstown at 2.30pm.

Take a look at the rest of the quarter-final results and semi-final fixtures for this year’s Fr. Godfrey Cup here.