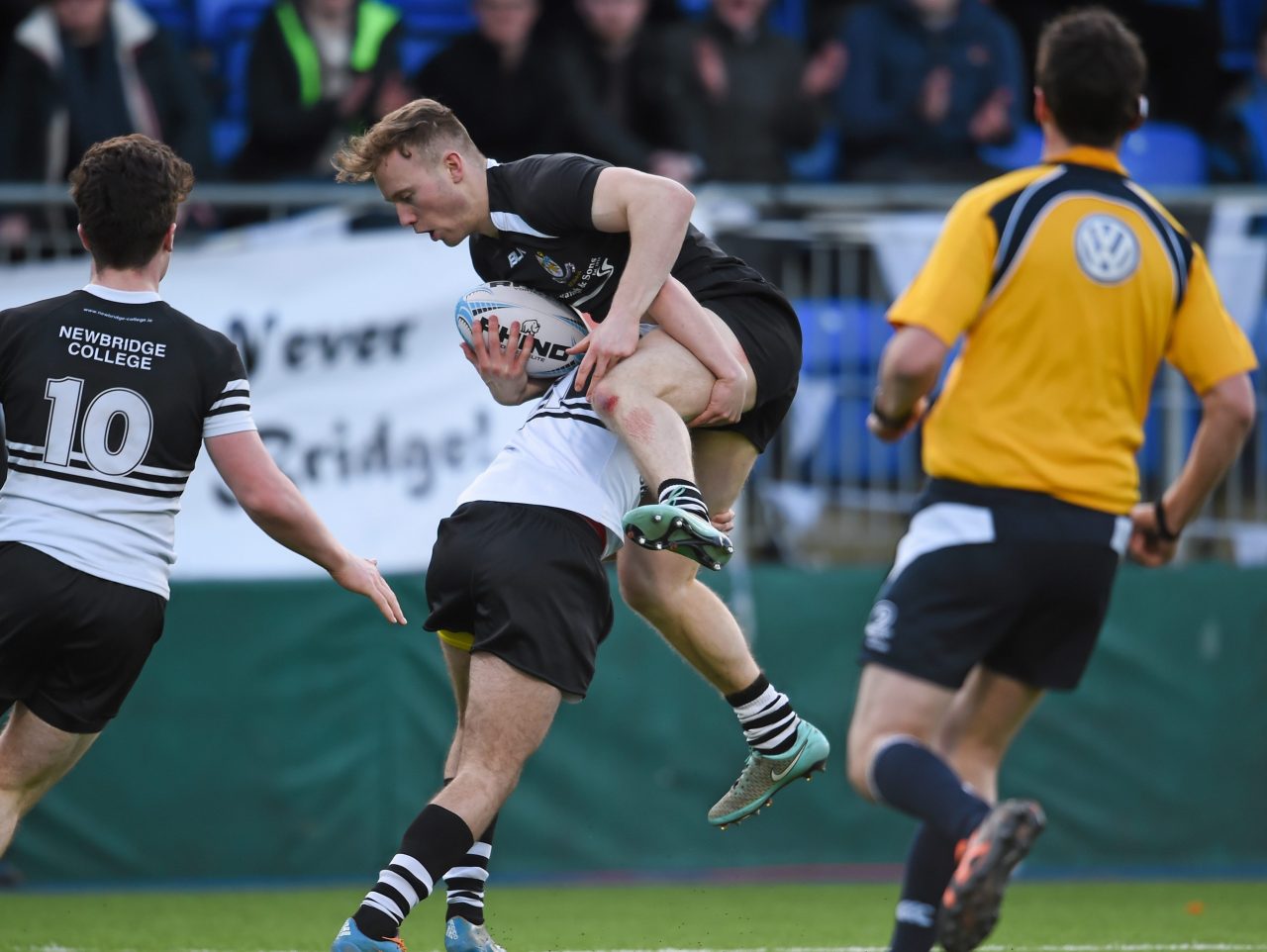 These two will have to wait until their replay on Monday to see which will join Belvedere in the Bank of Ireland Leinster Senior Cup final, in association with Beauchamps Solicitors, at The RDS on St Patrick’s Day.

Roscrea started out the stronger, sending their big men into contact to draw a kickable penalty. They turned down the points for maximum reward.

Newbridge were prepared. They stayed honest and forced a turnover from hooker Eoghan Maher.

Roscrea were soon made to pay by captain Jimmy O’Brien’s break from deep, attracting the last defender to send Jake Howlett in for an electric try. Scrum-half Colm Doyle missed the conversion to leave it 5-0 to Newbridge in the sixth minute.

A penalty came. They went to the corner again – twice. A third quick penalty had referee Gary Conway speaking to Newbridge about their discipline. Again, they survived through a knock on.

The Roscrea tide kept rolling forward. Tim Carroll was taken down by fly-half Tim Murphy as the Kildare boys began to take confidence from their defence.

Then, Trayers was whistled for not releasing when going to the floor in the tackle and Doyle made it 8-0 from 30 metres.

The restart was overcooked and Newbridge had a scrum back on halfway. They were playing with greater deception especially in the three-quarter line.

Scrum-half Doyle’s ball out on the full was evened out by Roscrea’s fumble forward at a maul.

O’Brien came calling again from a long pass by fly-half Murphy into the midfield, centre Rob Wharton hauling him down in the nick of time.

The ‘Bridge earned a penalty and it was their turn to go for the maul rather than three points. They were held up for a turnover.

Another loose Roscrea clearance was punished by Murphy’s return into the corner. Newbridge were making better decisions and winning the territory game through the kicking of Doyle and Murphy.

It took the nimble ruck work of openside Mattie Keane to prevent greater damage, sparked by the influence of O’Brien in the middle.

Then, Wharton was spotted making his run ahead of the kicker Tynan’s garryowen for Doyle to come up short from 40 metres on the half-hour. 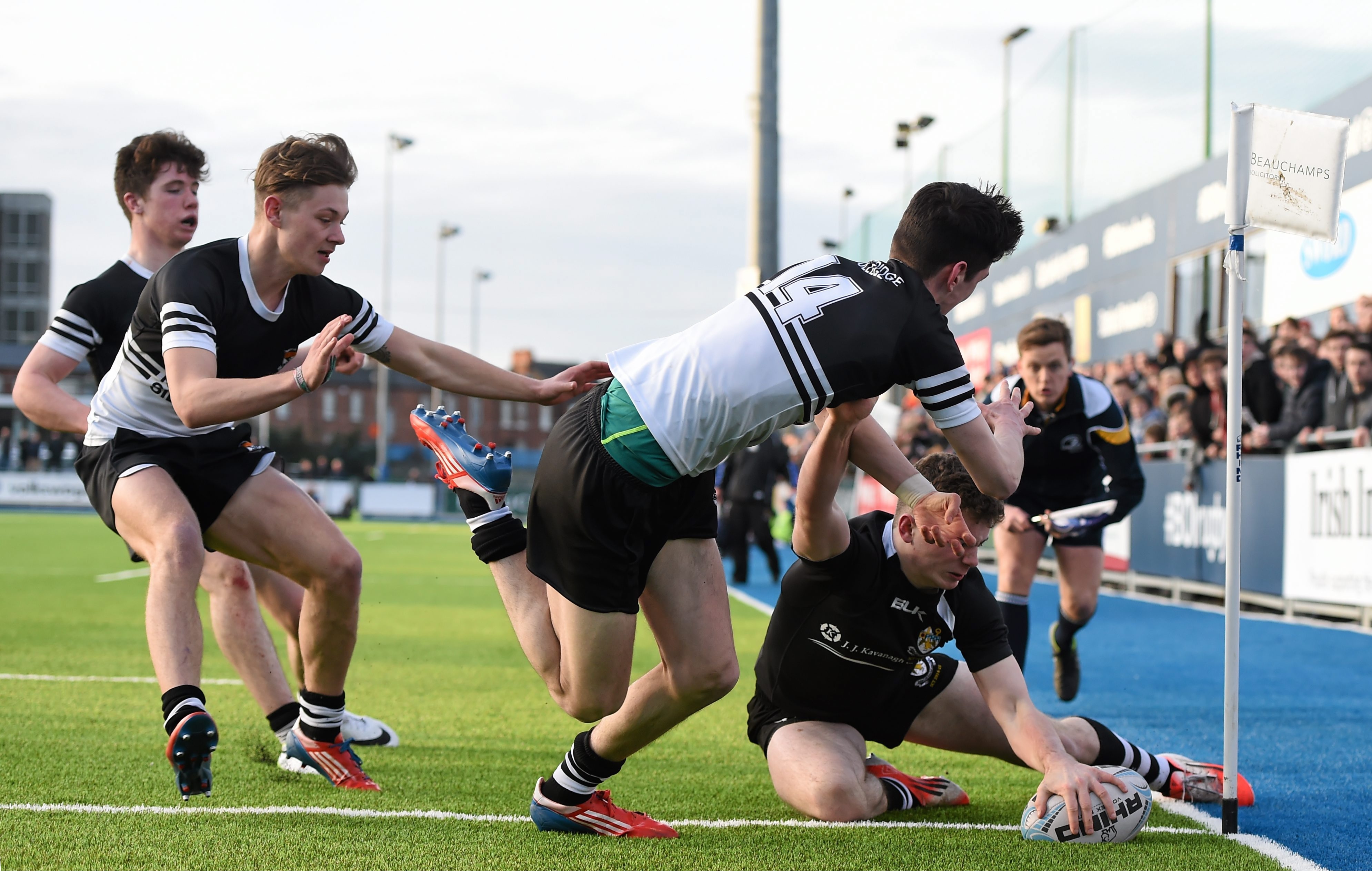 When O’Brien countered again, Roscrea lock Aaron Browne was waiting to clamp down for the penalty. The lineout malfunctioned.

Fly-half Tynan and full-back Carroll were contained by Murphy, O’Brien and Howlett as the Newbridge took an 8-0 lead to the break.

On resumption, Roscrea opted to go to the clouds without the accuracy or the chasers to make it work.

Newbridge left wing Colm Stapleton slipped a tackle or two to get away. His kick ahead went directly into touch on the full.

That was okay. They closed in on a choke tackle on Tim Foley to win the ball back. Their exit strategy left a lot to be desired, the ball rifled into touch on the full again.

There was no surprise when Roscrea opted for the maul. It was good for ten metres and another penalty. The pick-and-jam was effective.

It drew yet another penalty. Captain Foley made it 8-3 in the 45th minute.

A crunching tackle by Trayers shook the ball free from Patrick Ryan. It could have been costly. The Newbridge line came forward and dominated the collisions to eventually force a penalty for not rolling away.

They were on the point of making gains when on offload went awry. A long ball forward from Carroll was made good by his chase for Stapleton to concede a 5-metre lineout.

It was taken in by Fineen Wychereley. The rumble came. So too the drives. Prop Liam Walsh almost made it. Scrum-half Keith Kavanagh did to tie it up in the 53rd minute.

It was anyone’s game. It would come down to a test of mental mettle.

The continuous use of the maul was understandable. It earned another penalty. Foley pointed to the posts and was short of the target.

Roscrea went into overdrive to create room on the outside for replacement Joe Murphy and he was a foot-in-touch away from five points.

Newbridge forced Trayers into a knock-on and then won a penalty at scrum time to find relief. From there, they blasted forward through full-back Mark Delaney and

Murphy for Stapleton to come within five metres. They still had the time and the ball to get the job done. But, referee Gary Conway blew a body for going to ground and a replay was probably the fairest outcome.

Replacements: A Mahony for Joyce, D Walker for Ryan, R Culliton for Buckley all 63 mins.