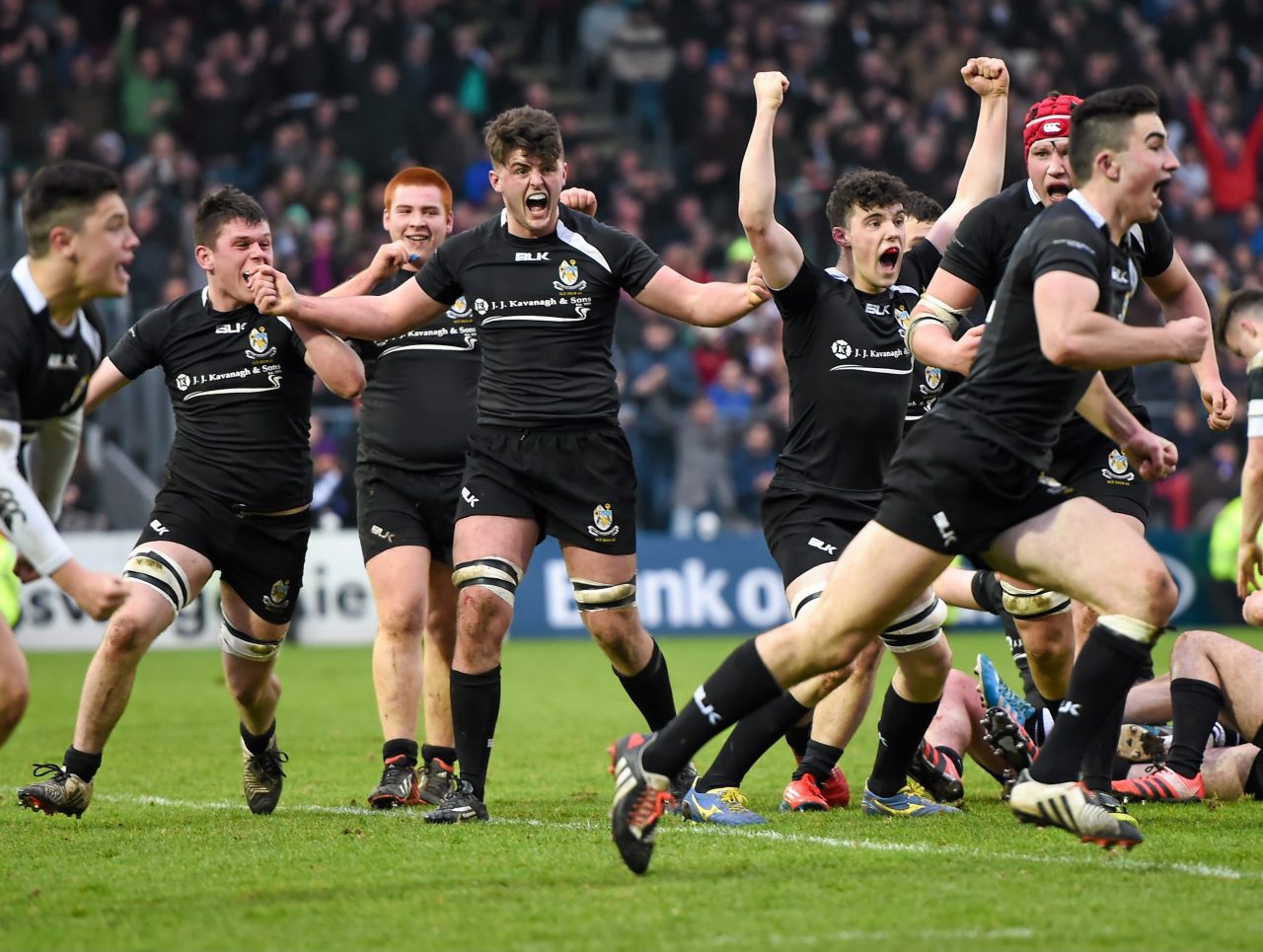 History was made at the RDS this afternoon, when Cistercian College Roscrea were crowned Bank Of Ireland Leinster Schools’ Senior Cup champions for the very first time in front of a crowd of 7,950.

Belvedere College had started brightly with an early score from Sean Long, before a penalty by Ireland Schools international Tim Foley helped Roscrea to settle. Belvo’s Conor Jennings registered six points throughout the course of the action, but thanks largely to tries in either half from Dan Trayers and Daniel Keane, it is the Offaly school who will add their name to the competition’s roll of honour.

This was the fifth time that Roscrea were featuring in a senior decider, and following their comprehensive 46-15 reversal to Clongowes Wood College in the same venue four years earlier, there was a clear determination in Pieter Swanepoel’s side to make the 2015 showpiece a more memorable occasion.

However, they were facing formidable opponents in the form of Belvedere College, who were aiming to secure an 11th title at this grade. Strong defensive work from Roscrea kept the north Dubliners at bay initially, before their line was ultimately breached with nine minutes gone on the clock.

Belvo’s physically imposing pack had secured a scrum inside the Roscrea 22-metre-line, and following a memorable run towards the right-flank, energetic half-back Hugh O’Sullivan unleashed an inch-perfect off-load for winger Long to cross over.

Jennings was off-target from his subsequent bonus strike, but the Great Denmark Street School had, nevertheless, served notice of their potential.

Yet, Roscrea recovered from deficits against Blackrock College (quarter-final) and Newbridge College (drawn semi-final), and knew that remaining calm and composed was essential to their chances of success.

Following an excellent break by Keane, captain Foley had an opportunity to open Roscrea’s account on the stroke of 20 minutes. He made no mistake with his first effort from the kicking tee, and as the half wore on, Roscrea were keeping Phil Werahiko’s charges on the back-foot.

Belvo had looked set to hold out until the interval, but the increasingly confident Roscrea moved into the ascendancy on 32 minutes.

From a five-metre attacking scrum, powerful number eight Trayers (the team’s vice-captain) gathered possession, and – under intense pressure from a retreating Belvo rearguard – proceeded to drive past the whitewash for an unconverted try.

This was a major morale-boost for Roscrea, but despite being wide of the mark from a 35-metre penalty, a successful Jennings place-kick in stoppage-time ensured that parity was restored.

Jennings was the top-scorer for Belvo moving into this fixture, and he extended his personal haul for the campaign to 42 points when he converted a penalty from the left-wing ten minutes after the restart.

In a game of such fine margins, this was a potentially crucial contribution from Jennings. Roscrea were only behind for three minutes, however, as they broke through for their second try after spreading the ball at pace across the Belvo line.

Several players were involved in the build-up, but it was full-back Tim Carroll who delivered the decisive pass for Keane to crash over.

A superb two-point salvo followed from Foley, and when the inside centre added his second penalty 14 minutes from time, the Roscrea faithful were daring to dream. In fact, with Belvo struggling to make headway in the opposition half of the field, the seven-point cushion looked like being enough for Roscrea.

The never-say-attitude of Belvo led to some uncomfortable moments, though, and they were agonisingly close to claiming the try they badly needed on 67 minutes.

They were held up just shy of the line from this powerful surge, and when Roscrea turned over possession past the 70 minute mark, a carnival-like atmosphere developed amongst their passionate followers.